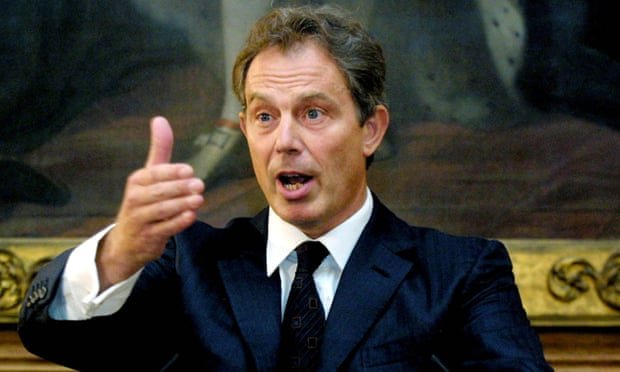 Tony Blair rock opera to be staged in London in 2021

Tony! (A Tony Blair Rock Opera) will be performed at the Turbine theatre, at Battersea power station in London, next February with lyrics by the comedian Harry Hill.

Key political aides during Blair’s time as prime minister from 1997 to 2007 are also to be depicted, including his director of communications Alastair Campbell, adviser Peter Mandelson and deputy prime minister John Prescott.

Osama bin Laden, President George W Bush and Blair’s chancellor and successor, Gordon Brown, will also appear as characters in the production, which is one of a number of shows in the festival MTFestUK 2021, which runs from 1 to 13 February.

The opera, being performed from 4 to 6 February, will tell the former prime minister’s life story and will play “fast and loose with the facts”, according to the theatre.

Blair was in his first year in Downing Street when Princess Diana died in Paris in 1997. His tenure is remembered for the contentious invasions of Afghanistan in 2001 and Iraq in 2003, which led to the execution of Saddam, the country’s former president.

Paul Taylor-Mills, artistic director of the Turbine theatre, said: “It’s impossible to ignore the challenges and sheer nerve required to make any kind of announcement during these times.

“With all that in mind, I couldn’t be prouder to be associated with the Turbine theatre and everything that it stands for, particularly with regard to investing in and generating new work.

“It’s fair to say that MTFestUK 2021 is going to be our most diverse to date and I’m thrilled to be presenting musicals from first-time writers, alongside Tony and Olivier award-winning artists.”

It is not the first production based on the 67-year-old former prime minister, who has gone on to set up a global institute and interfaith charitable foundation. Tony! The Blair Musical, a satire written by Chris Bush, and its sequel Tony of Arabia had short try-outs around the start of his third term in charge of the country.

In 2016, Corbyn the Musical: The Motorcycle Diaries premiered at the Waterloo East theatre, written by Rupert Myers and Bobby Friedman. It featured an appearance from a character playing the role of Blair and was set in a future where Jeremy Corbyn, then Labour leader, was prime minister and Russia had declared nuclear war on the west.
Add Comment