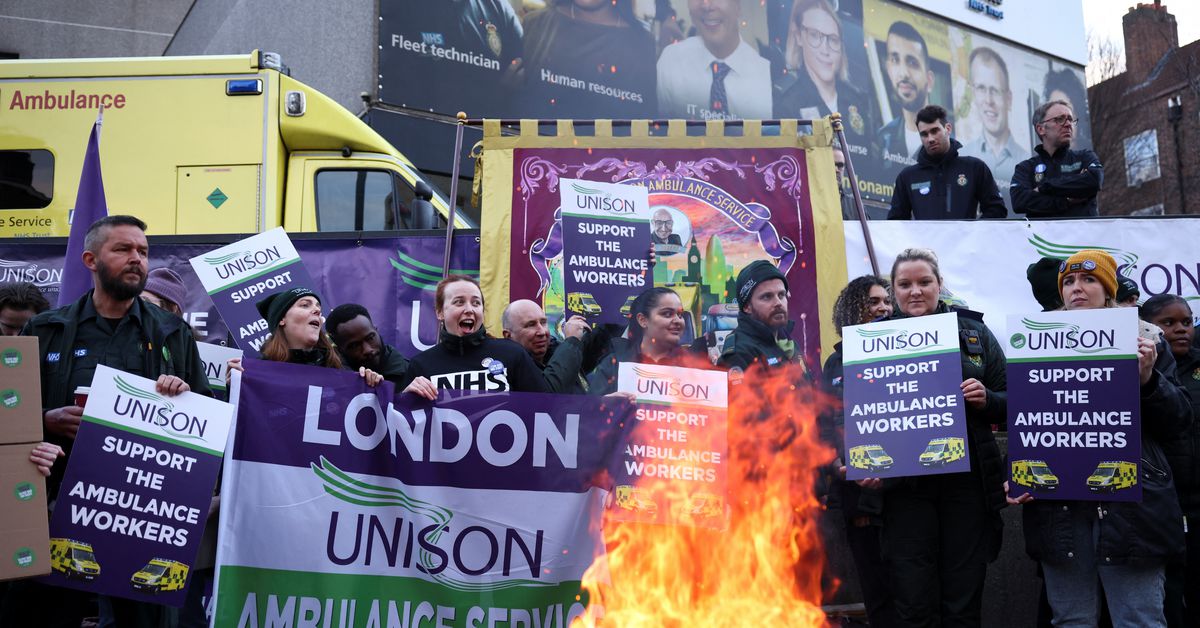 Thousands of ambulance workers in England and Wales walked out over pay on Wednesday, increasing the strain on a state-funded health service a day after nurses went on strike, as government ministers advised the public to avoid taking risks.
The government said the "deeply regrettable" strike would result in fewer ambulances on the road, with only the most urgent life-threatening cases such as heart attacks prioritised.

Health and Social Care Secretary Steve Barclay said the public should "just use their common sense", adding that the action came when the National Health Service (NHS) was "already facing very significant pressure" from cases of flu and COVID-19.

"That's the point at which the trade unions have chosen to take industrial action and in doing so they haven't been willing to work with us to agree national exemptions in terms of covering all of the category one, category two, life threatening and emergency calls," he told the BBC.

Christina McAnea, general secretary of Unison, said she was shocked by Barclay's comments given that detailed contingency plans had been agreed in local areas.

"This implication that somehow we've been negligent is really quite shocking," she told Reuters on a picket line in the capital. "(It's) scaremongering across the public."

She said health workers, including ambulance crews, were "leaving in droves" because services had been run down.

"That puts additional pressure on those staff who are left behind," she said, adding that health authorities were struggling to recruit and retain workers.

Tim Stephens, a 44-year-old paramedic, said the pressure on all ambulance staff was "absolutely unprecedented".

"We cannot keep up with this rate of work and our patients, particularly in the ambulance service, wait hours on end on a daily basis," he said.


McAnea's counterpart at Unite, Sharon Graham, said all category one calls would be answered, while category two calls, which includes conditions like strokes, would be assessed by healthcare workers.

"This strike did not need to happen," she told the BBC. "(The government) need to get back to the negotiating table so we can get a proper pay rise for these workers and everyone can go back to work."

The third union, the GMB, has said pay in the health service has fallen 17% in real terms since 2010, while demand for ambulances has risen 77% in the same period.

An independent pay review body has awarded more than 1 million NHS workers a pay rise of at least 1,400 pounds ($1,704), equating to an increase of at least 4% for most ambulance staff, according to the government.

Unions have asked for a rise above inflation, which stood at 10.7% on the consumer price measure in November.

Barclay said he was focused on clearing backlogs from the pandemic and reducing delays in admitting patients arriving at hospitals in ambulances.

He said the government had accepted the pay review body's recommendations, which had taken effect nearly nine months ago.

"We've already started the pay process for next year, for next April, and that's where the discussion should be held," he told LBC Radio.

"It was already the case even without the ambulance industrial action today that it was taking us twice as long to get to people in category two."

The army has been put on standby to help drive and direct emergency vehicles, but soldiers will not have all the powers that ambulance staff have to respond or provide clinical care.