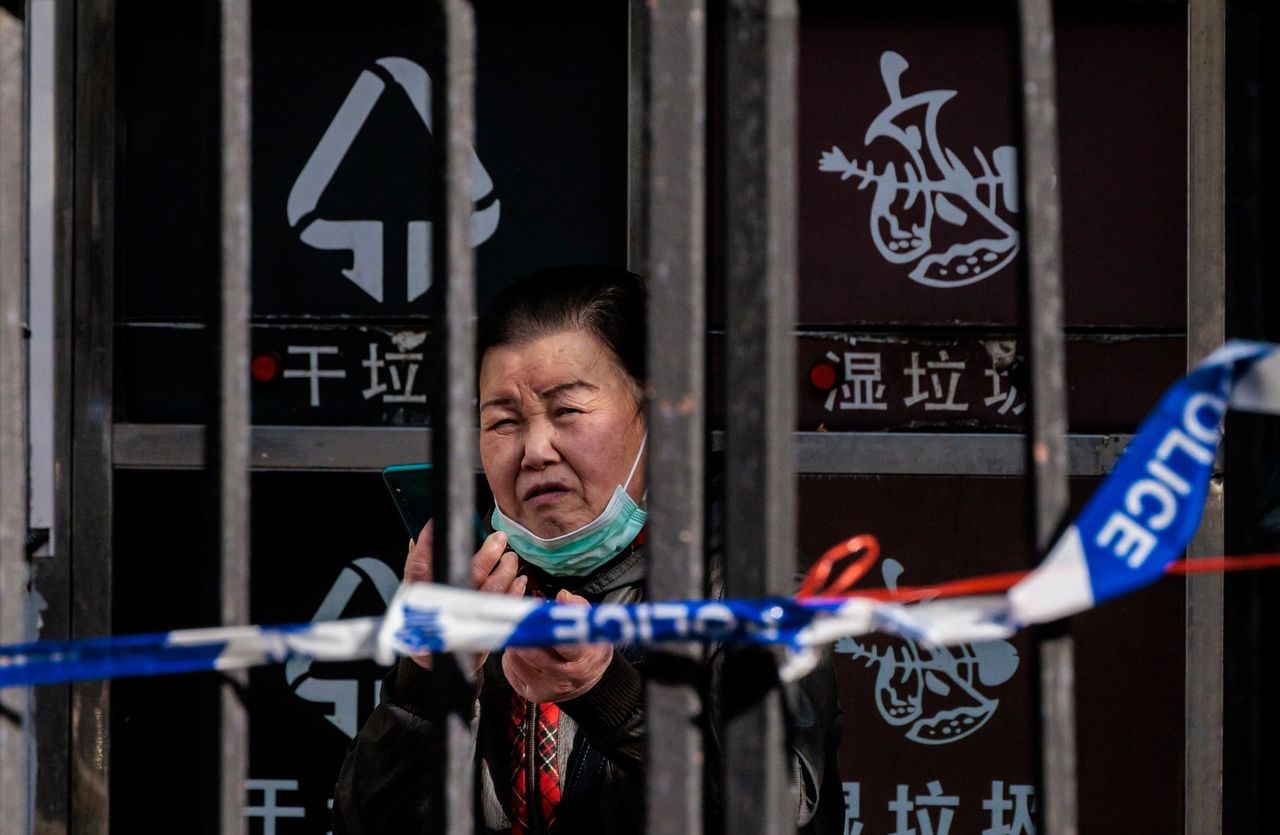 ‘This is inhumane’: the cost of zero Covid in Shanghai

Jia Ruiling’s* father has been enduring severe pain since 17 March. He has late-stage stomach cancer, but his hospital refused to treat him because Jia’s neighbourhood in Shanghai was under lockdown as a result of a handful of Covid cases.

“We begged the hospital to accept him again and again,” Jia said. “At some point my father was in so much pain that he wanted to take his life. What can we do? Please, help us let the central government know.”

China’s strict zero-Covid policy means all positive cases have to be hospitalised. But in the last few weeks, as case numbers have risen sharply and 26 million people entered a harsh lockdown, mainland China’s most important financial hub has come to a standstill. The number of new daily positive cases exceeded 10,000 for the first time on Monday. Although 38,000 health workers have been shipped in from around China to help, medical resources are overwhelmingly diverted to combat Covid, leaving it difficult for non-Covid patients like Jia’s father to access them.

Luo Ruixiang*, a 39-year-old Chinese worker in the Republic of the Congo, had a similar experience. He flew home in March in the hope of receiving urgent treatment after damaging his left eye. 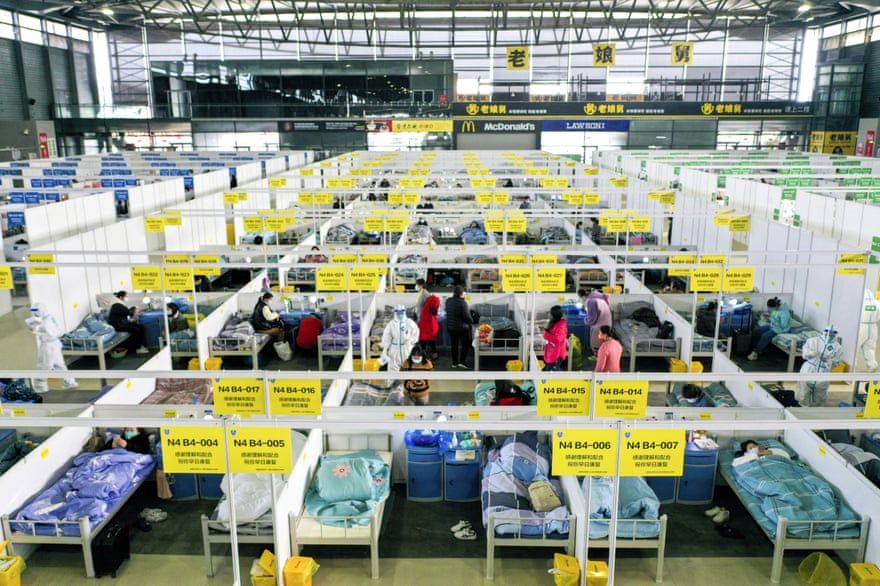 People with mild and asymptomatic cases of Covid quarantine at the Shanghai New International Expo Center on 1 April. 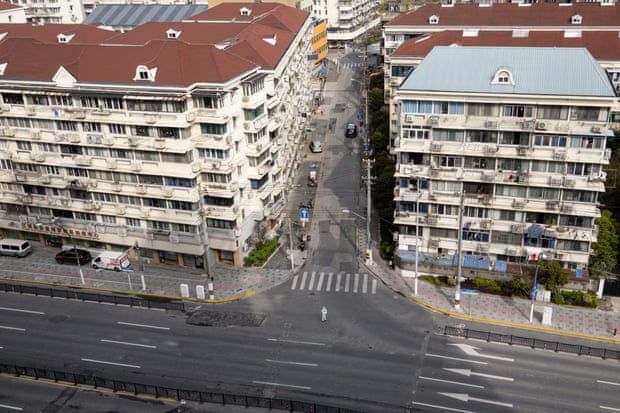 An officer in personal protective equipment walks across an empty street in the Yangpu district of Shanghai.

He landed in Shanghai and informed his quarantine hotel and customs officials of his medical needs, but for more than a week he heard nothing. “I was worried that if I waited until the quarantine was over, I would have already gone blind,” he said.

Desperate, Luo went on to the social media site Weibo to plead for help. Local media soon called him, and medical help was quickly on the way. “Thankfully, the operation is done,” he said. “It’s not supposed to be this complicated, but as a small potato everything is so difficult for me.” 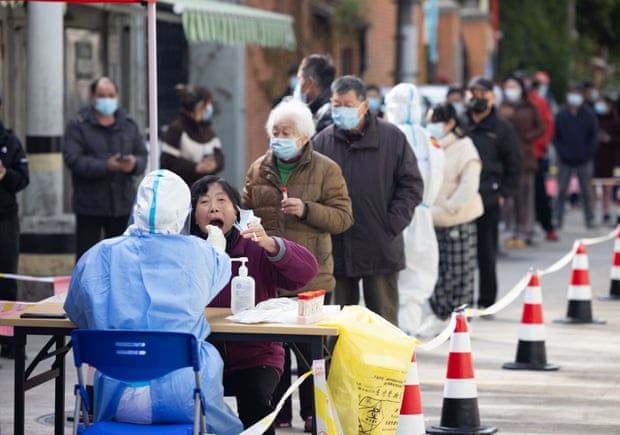 A medical worker conducts Covid tests in the Changning district of Shanghai.

The Omicron outbreak in Shanghai is the largest test for China’s zero-Covid policy so far, and the city is struggling. On Monday, health officials reported 8,581 asymptomatic and 425 symptomatic cases for the previous 24 hours. The numbers are small compared with countries such as the UK and US, but they are some of the largest in China since the virus was first reported in Wuhan in late 2019.

Critics say the city, one of China’s most sophisticated, should have been better prepared. “They have been too successful since 2020, so they became complacent,” Jia said, stressing she was not anti-government but that her father’s suffering had made her “very angry”.

“Both the virus and people are changing,” said Chen Xi, a public health expert at Yale School of Public Health. “It is the first time that the subvariant of Omicron, ie BA.2, strikes Shanghai. The unprecedented speed of spreading fast exceeds contact tracing and other conventional public health measures. People also have salient Covid fatigue after two-plus years of stringent health measures.”

As lockdown continues in China’s biggest metropolis, the sense of helplessness is overwhelming. Photos and videos that showed young children separated from their parents at a Shanghai hospital stirred anger on social media over the weekend. One parent whose toddler was taken away after testing positive wrote on social media: “I’m so upset … This is inhumane.”

Several Shanghai-based EU diplomats sent a letter to the city’s government on 31 March, pressing it to provide assistance to their citizens when they needed medical help. They also urged Shanghai not to separate children from their parents “whatever the circumstances”.

Shanghai’s health officials defended the policy on Monday as parents and guardians voiced their anger on social media. Wu Qianyu, an official from the Shanghai municipal health commission, said the policy was integral to efforts to prevent and control the virus.

Responding to complaints, Ma Chunlei, the secretary general of Shanghai’s municipal government, admitted on Friday that his administration had handled the outbreak poorly. “Our awareness of the highly infectious and insidious Omicron mutant strain was not sufficient, and our preparation for the significant rise in infections was not comprehensive,” he said. “We sincerely accept your criticism and are working hard to improve it.” 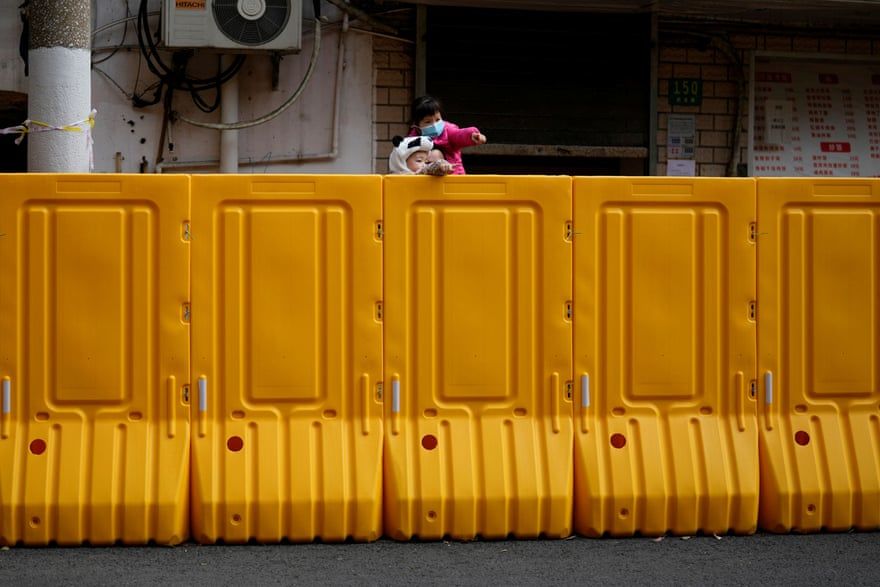 People peer over a barrier of an area under lockdown in Shanghai on 26 March.

Despite the confession, some say things still have not improved. Deng Zhaoyang’s* wife and three-year-old son have been in a government-run quarantine facility since 29 March. “The facility is run by volunteers and no one seems to be in charge. So much so, we don’t even know when they are going to leave the facility, and no one went to do Covid tests for them either,” he said.

Deng, who emigrated to the city as an adult years ago, said that in the last couple of years when things were normal and other parts of China grappled with outbreaks, he had never thought the same thing would happen in Shanghai.

“Before Omicron arrived, it was understandable that those who got it should be sent to quarantine facilities,” he said. “But now most of them only have mild symptoms. Shouldn’t the government adjust their policy accordingly?”

The sense of frustration is shared by some of the city’s medical professionals. In a revealing phone conversation last week that has been making the rounds online at home and abroad , an official at the Shanghai centre for disease control and prevention (CDC) said the city’s medical resources were under severe strain. 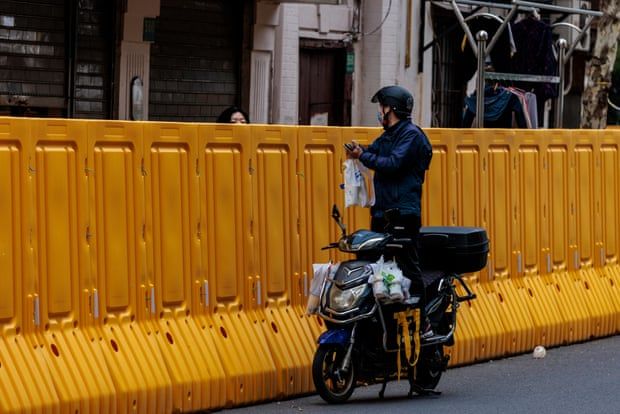 A man delivers food to people under quarantine on the Puxi side of Shanghai.

“I’ve already suggested [to higher officials] multiple times that those with mild or no symptoms should just be quarantined at home,” she said, adding that current efforts to control the virus were more about politics. “But who has listened to me?” Some Chinese internet users, however, called her “wrong” and “dangerous”. On Saturday, Shanghai Pudong CDC said it was investigating the caller’s complaint. It also issued an internal notice, telling staff who answer the hotline to speak with one voice.

On the same day, Sun Chunlan, a Chinese vice-premier, stressed “unswerving adherence to the dynamic zero-Covid approach” on an official visit to Shanghai, according to Xinhua. Less than 24 hours later, the Chinese military dispatched more than 2,000 medics to Shanghai to support efforts to curb the spread of the virus.

Jin Dong-yan, a professor at Hong Kong University’s school of biomedical sciences, said it would be weeks before the virus could be under control. “Even if they can achieve zero Covid with exceedingly high cost, another accident might cause another major surge … Living with the virus is the only viable option,” he said.

A large part of “living with the virus” is to do with an effective vaccine. Officials have begun talking openly in recent months about mRNA vaccines, an indication that the authorities may have been thinking about adopting vaccines other than the Chinese-made Sinopharm and Sinovac. Dr Zhong Nanshan, the country’s top respiratory expert, said in December that China should learn about the good things in other countries, such as mRNA vaccines. The Shanghai government also said in an official document last week that it supported importing vaccines and Covid treatment drugs.

“Deploying rapid antigen tests [RAT] and approval of mRNA vaccines are both doable as they have ample data for [the authorities] to approve mRNA vaccine as well as adequate capacity to mass manufacture RAT,” Chen said, adding that both low vaccination rates among older adults and the vaccine technology being used in China were “worrisome”.

“The remaining time window is fast shrinking,” he said. “It is so important for other regions in China to learn and ramp up vaccination before the local surge begins.” 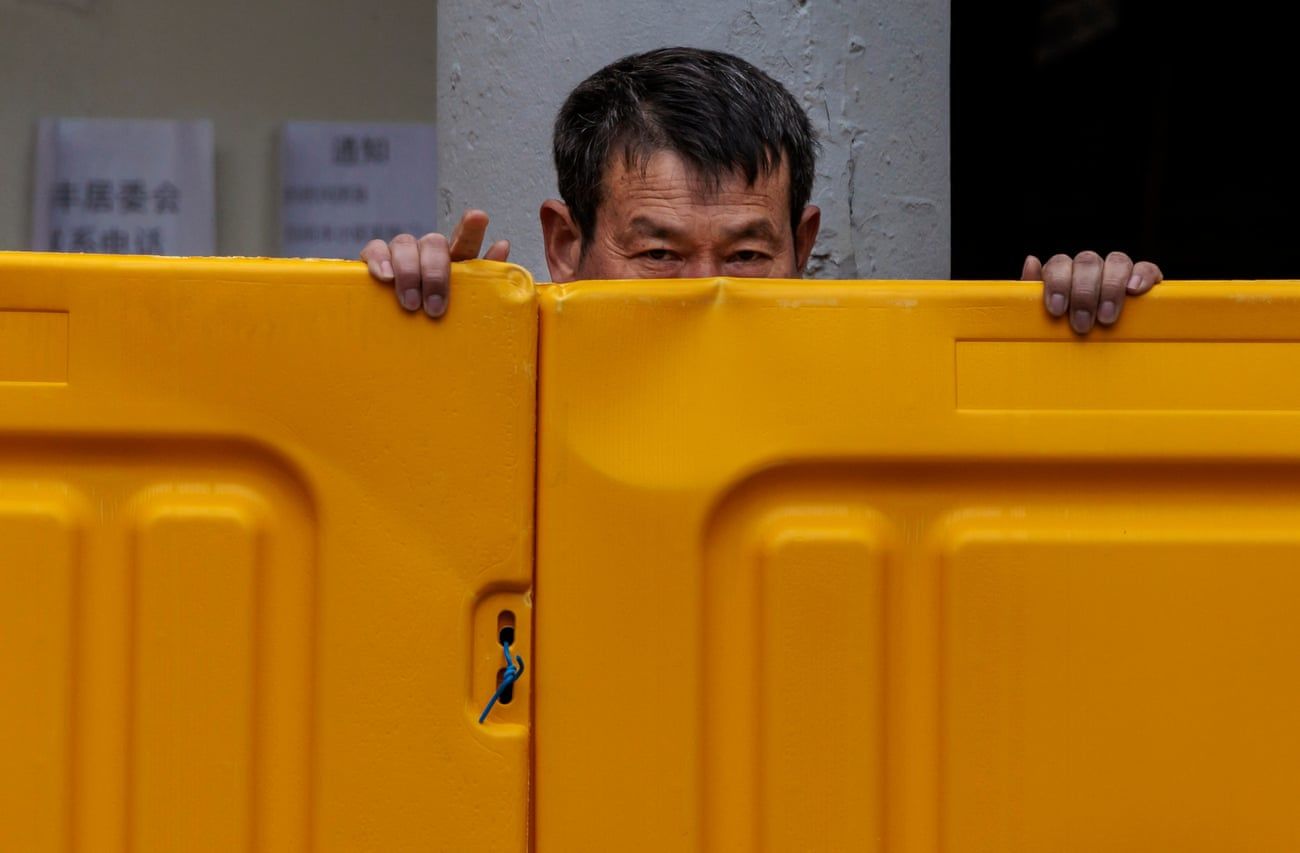 A man stands behind the fence in the compound under quarantine in Puxi.

For Jia, the idea of living with the virus seems remote. She just hopes her father will be sent to his cancer hospital as soon as possible. “His pain has alleviated as a result of bigger doses of painkillers in the last couple of days, but this is not a sustainable solution. He needs to see the doctor,” she said.

Since Jia revealed her father’s ordeal online last week, she said she had been receiving attention from the media. Perhaps because of the pressure, her local district authorities had called her to say they could send her father to the hospital.

“They had one requirement though,” she said. “They wanted me to take down my social media posts first. I refused. They did not manage to send my father to the cancer hospital in the end, because they are only a district-level authority, and they were unable to persuade a municipal-level institution after all.”