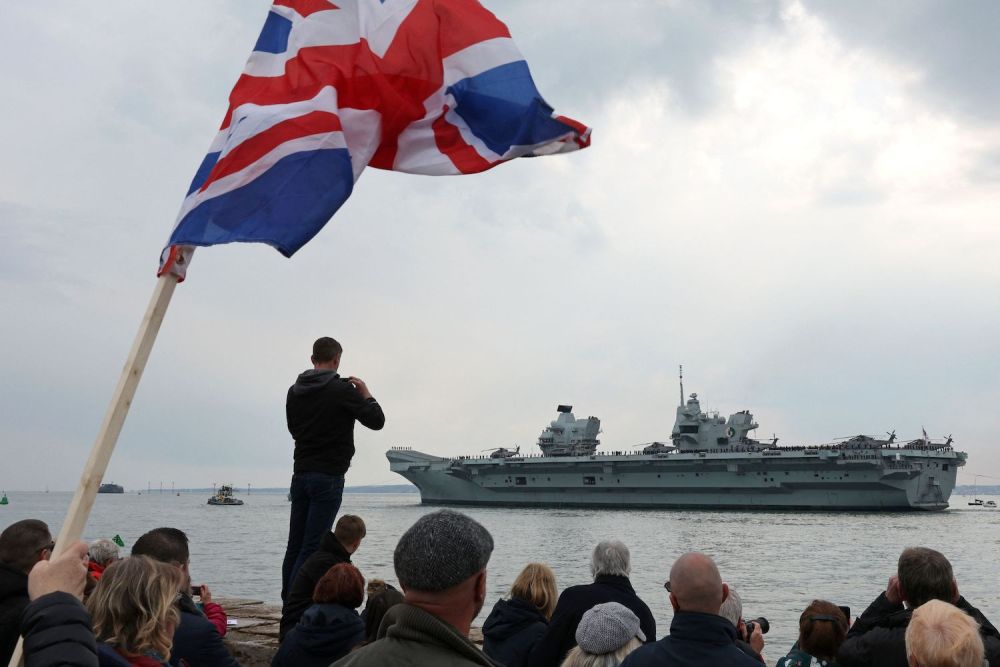 Are U.S. allies finally rallying around Washington’s more aggressive stance toward Beijing?
For more than 800 years, English naval ships have been launching from Portsmouth, bound for the world’s oceans. Last week, the Royal Navy opened a new era with the departure of a new aircraft carrier, HMS Queen Elizabeth, for the beginning of an seven-month deployment that will bring it to the Indo-Pacific, along with a strike group. There, the Royal Navy task force will participate in operations designed to ensure freedom of navigation and open seas. The reason? “We see China as being a challenge and a competitor,” said Britain’s first sea lord, Adm. Tony Radakin, during a visit with his U.S. counterpart, Adm. Mike Gilday, the chief of naval operations.

Some might wonder why the British are sticking their toes into the turbulent waters of far-away Asia—why London is suddenly so committed to upholding a “free and open Indo-Pacific,” adopting the slogan used by the Trump and Biden administrations alike. Or, even more tellingly, why so many nations even beyond the United Kingdom are increasingly vocal in their criticisms of Beijing.

The looming Chinese-U.S. confrontation—and especially the United States’ supposedly more aggressive stance—is often cited as the main threat to global peace. The danger is argued to be the result of former U.S. President Donald Trump’s attempts to overturn four decades of more cooperative U.S. policy toward China. Trump’s moves, including imposing tariffs, banning tech companies, challenging Beijing’s influence campaigns, increasing naval operations in the South China Sea, and deepening ties with Taiwan, led to warnings that Washington was turning China into an enemy and pushing the two nations closer to conflict. For example, an open letter to then-President Trump signed by more than 100 American academics and former diplomats and military officers expressed the belief that “many U.S. actions are contributing directly to the downward spiral in relations.”

The fact that the Biden administration has not only continued but in some ways intensified Trump’s policies has added to concern that the U.S. foreign-policy elite is now irrevocably committed to a confrontational approach to China. Thus, the Nation’s Michael Klare criticized Secretary of State Antony Blinken for lambasting the Chinese at his Anchorage meeting with his Chinese counterparts and stated that the U.S. Navy’s freedom of navigation operations in the South China Sea were “provocative maneuvers,” despite The Hague’s 2016 rejection of Beijing’s claims in those waters.

Were it really the case that America alone was to blame for U.S.-Chinese tensions, then one might expect to see other countries dissociate themselves from Washington’s apparently rash actions, either sitting on the sidelines or actively opposing U.S. policies. Instead, Beijing not only finds itself the target of a widening range of critics but in active disputes with a host of liberal nations.

From influence campaigns to hacking, from economic threats or coercion to the militarization of international waters, Beijing is increasingly exercising a might-makes-right foreign and security policy that is setting it against large parts of the world, independent of whatever is happening in U.S.-Chinese relations.

Perhaps the sharpest tensions are currently between Australia and China. Australia has been facing economic warfare from its biggest trading partner since it passed strict legislation starting in 2018 to block Chinese money from its domestic political system, ban Huawei from its 5G networks, and call for an international investigation into the origins of the coronavirus. Beijing has since ended economic dialogue with Canberra and either banned or put damaging tariffs on billions of dollars of Australian products, including beef, wine, wood, and lobster. In response, Australian Foreign Minister Marise Payne canceled two Belt and Road projects, and an Australian general warned of the high likelihood of armed conflict between the two countries.

Meanwhile, in the South China Sea, Philippine Foreign Secretary Teodoro Locsin Jr. told Beijing to “get the fuck out” of the waters of what Manila calls the West Philippine Sea. The highly undiplomatic chastisement came after months of Chinese pressure at Whitsun Reef, with China at one point lashing hundreds of fishing vessels together in an attempt to intimidate Manila into surrendering the reef, à la the successful 2012 takeover of Scarborough Shoal. Beijing has largely ignored the 2016 Hague Permanent Court of Arbitration ruling against China’s claims in the South China Sea, continuing to send its fishing fleets and maritime forces into contested waters.

India remains on combat footing in the Himalayas, where Chinese forces regularly cross the so-called Line of Actual Control in strategic passes between Aksai Chin and Ladakh. Clashes there between forces of the two nuclear nations in the summer of 2020 led to the deaths of at least 20 Indian soldiers and an unknown number of Chinese. Indian commanders have stated that Chinese actions are the most aggressive since the 1962 border war between the two.
#Donald Trump  #Coronavirus
Add Comment