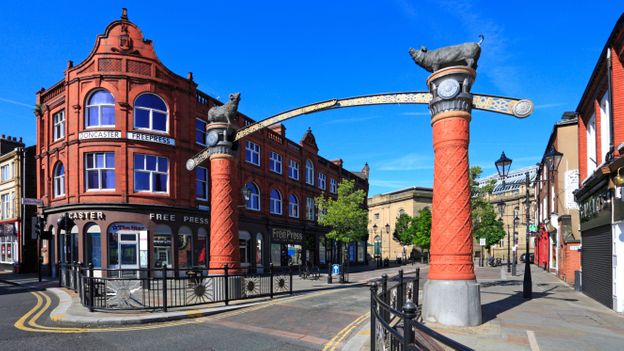 The 'Scottish' town stranded in England

Nine hundred years ago, the Yorkshire town of Doncaster was given to Scotland and never returned. Or so a quirk of history claims.

Cross Yorkshire from north to south, through the Norman-era borough of Richmond to the minster and market towns of Ripon, York, Selby and Rotherham edging the Great North Road, the ancient trackway first built by the Romans, and you'll find yourself dazzled by the past.

As romantic as it is ruinous, Richmond Castle is a history geek's dream. Fountains Abbey near Ripon can transport you to the High Middle Ages, while princely York Minster is an exquisite and triumphal monument to a town that is an emblem of English national pride. In the same walled city, you can stroll the historic street of Stonegate, where the most famous terrorist in English history was born. You might know him better as Guy Fawkes.

On the journey, you also may hear of strange curiosities, persistent legends and peculiar laws. Like the supposed and disputed ancient decree that states in York it is perfectly legal to shoot a Scotsman with a bow and arrow from the city's crenellated walls. Except on a Sunday.

But one lesser-known peculiarity is that Doncaster, another minster town and one that grew from a clay and gravel Roman fort, is not, in fact, English, but Scottish.

Call it a barmy revelation or historical anomaly, but this oddity dates back to 1136 in the days of King Stephen of England, when the town was ceded to King David I of Scotland in the first Treaty of Durham. And, officially at least, it was never given back.

Or so the tale goes. 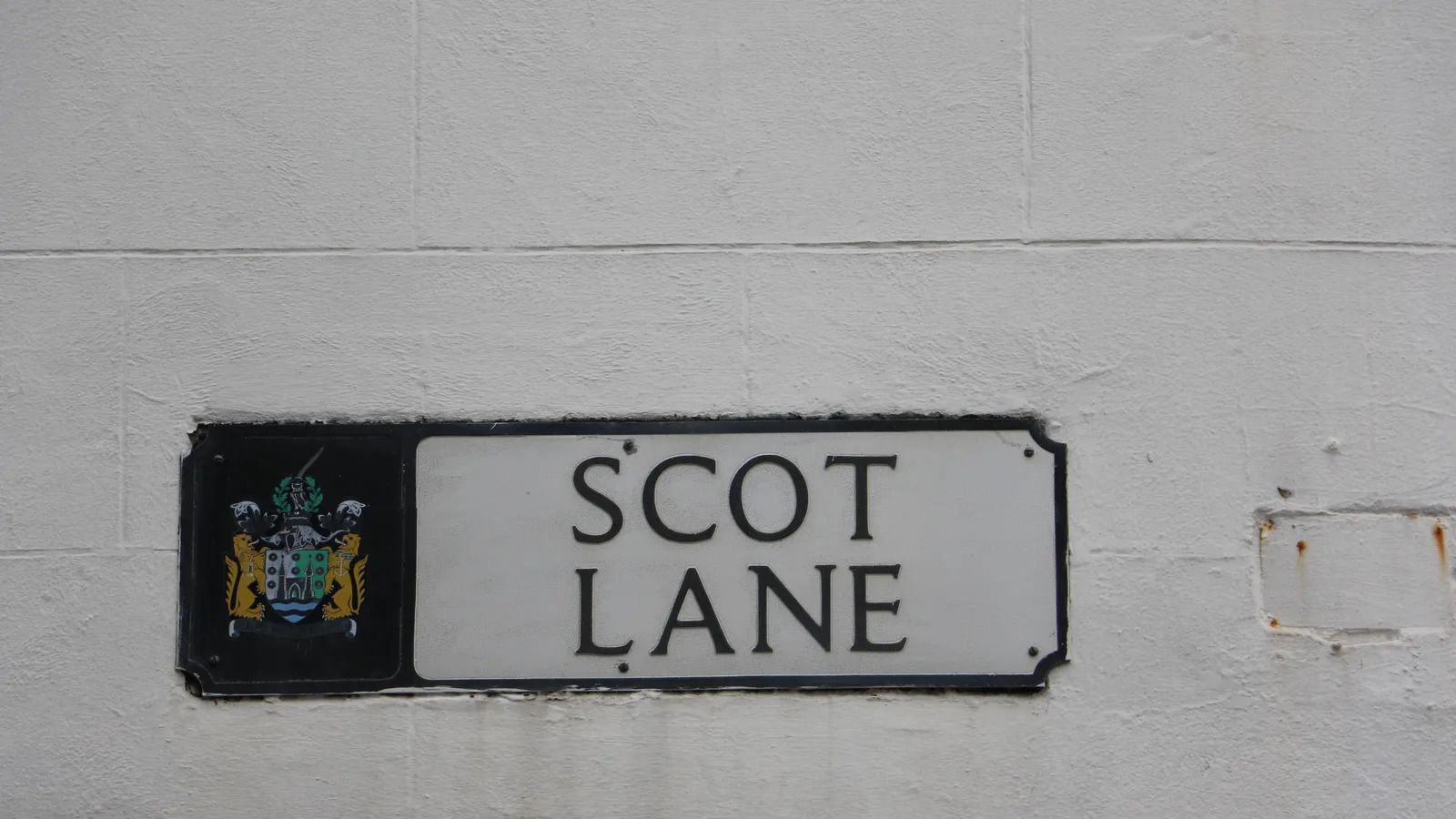 There are hints of Scotland scattered throughout Doncaster

Nearly nine centuries later, I followed the same course as the warring medieval English and Scottish kings, taking the road to Doncaster to try to make sense of this most perplexing of stories and one that remains tucked away within the academic footnotes of British history.

To begin with, I hoped Dr Charles Kelham, archivist of the city council and holder of a Scottish history PhD, might help set the record straight about so-called "Bonny Donny".

"It's a good story, isn't it?" he said when we met at the recently developed Danum Gallery, Library and Museum, the home for the city's heritage occupying what was once the Doncaster School for Girls. "It's peculiar, ostensibly, and it does stir people up, especially when talk of Scottish independence comes around. But there is a certain amount of truth in it."

The Danum enables plenty of reflection on the town's history and, inside, the museum exposes Doncaster's heart and bones, showing its story to be one linked to railways, horse racing (the town is home to the St Leger, the oldest class horse race in Britain), mining and Roman occupation.

On the other hand, there is little mention of the town's supposed Scottish ownership. In fact, the oldest document in the museum's 50,000-piece collection is the Royal Borough Charter of English king Richard I, dated 22 May 1194 and handwritten in Latin on sheepskin. Used since medieval times, charters grant rights and privileges to towns, boroughs and cities and this was the first proof that Doncaster was officially English by the turn of the 13th Century.

"There's no getting away from the fact that between 1136 and 1156 the manor of Doncaster was in the hands of the Scottish crown," said Dr Kelham, matter-of-factly. "Unfortunately, the borough records only go back to the 12th Century — and, sadly, the Scottish charter is lost."

Despite all the dynastic complexities, irrational impulses and duplicitous tendencies of the monarchs of the time, it was also true that, on a war path, King David I seized pockets of northern England during several attempted takeovers. Likewise, it was true that, to prevent further military incursions, David was given Doncaster as a sweetener, as well as being bribed with parts of Cumberland and Lancashire, and that his son and heir, Prince Henry of Scotland, is credited with making Doncaster a Scottish borough. In time, it was also true that David continued his warmongering in northern England — breaking the terms of the original treaty — and Henry II of England, the successor to King Stephen, regained control of Doncaster some 21 years later in 1157, after both David and Henry died in the early 1150s. That's all to say that Doncaster was still officially Scottish even though it was retaken by the English.

Confused? You’d have every right to be. 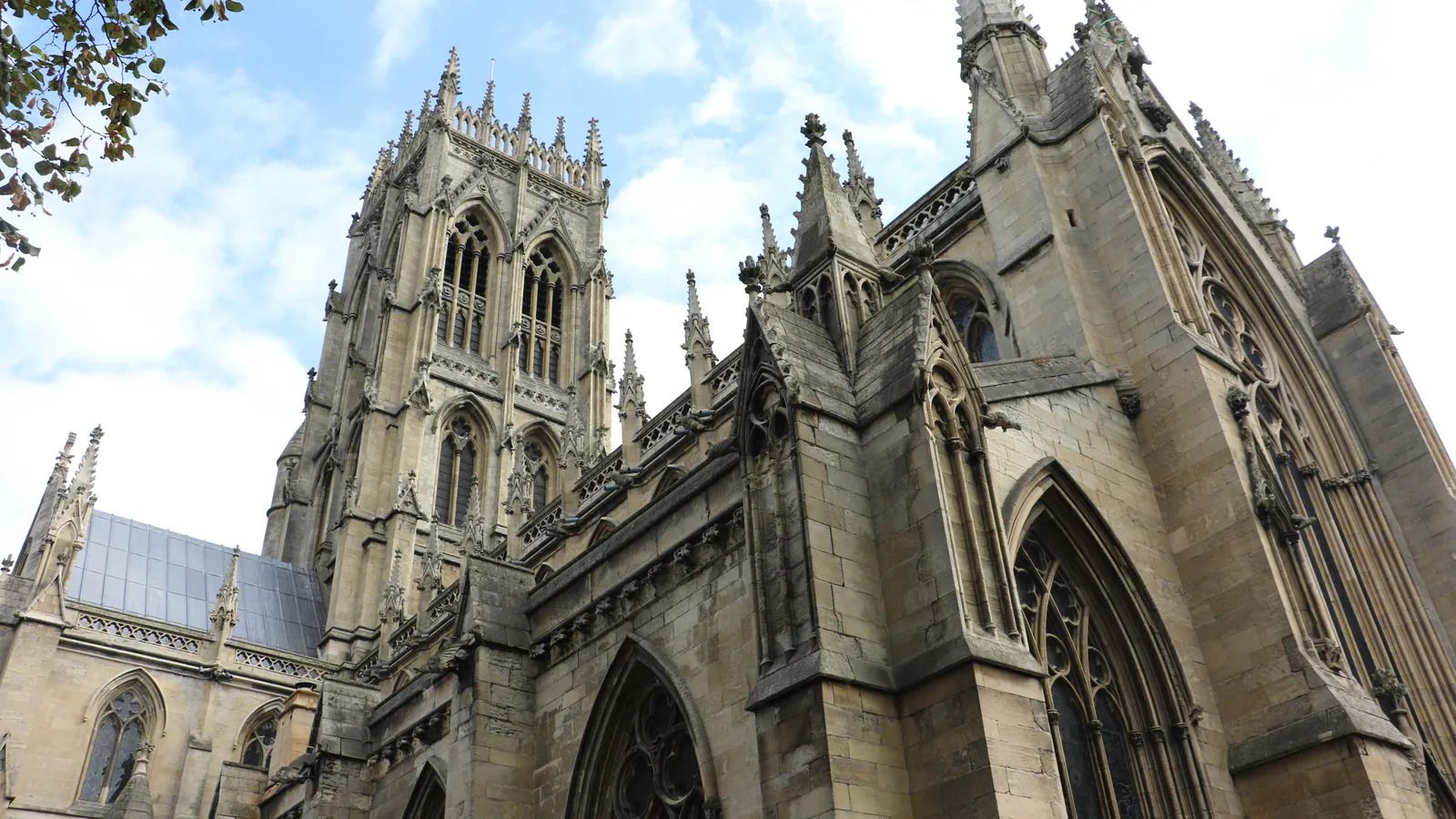 Doncaster is a minster town, like Ripon, York, Selby and Rotherham

Another problem, Dr Kelham informed me, was that Doncaster's 18th-Century agricultural prosperity meant few relics from the past remain. "It's especially tricky to find anything related to the Middle Ages as the town effectively did away with its history," he said. "The timber-framed buildings were regenerated in a Georgian style, so it changed the town's character and explains why it's so very different to York, for instance."

Often bypassed by visitors for this far more popular northern city, Doncaster remains a delight to wander. Other English towns have the same Victorian-era train station, interconnected shopping precincts and inner-city industrial units, but there are certain draws here that place it on a level with other handsome Yorkshire towns like Harrogate and Ripon.

There are the golden ivory stonework spires of gothic Doncaster Minster, designed by Victorian Gothic architect George Gilbert Scott. The beautifully embellished halls of the adorned Corn Exchange and iron-clad Wool Market. And beyond those, Downton Abbey-style Brodsworth Hall, unaltered since the 1860s and one of many English country house treasure boxes with a darker colonial history connected to a slaveholding past.

But there are also several sites in Doncaster with a palpable Scottish connection, and, at times, it feels as if there are flashbulb memories of minor histories at virtually every intersection.

This is where the Flying Scotsman, the world record-holding steam locomotive, was built in 1923 at the Doncaster Railway Works and where its engineer, Edinburgh-born Sir Nigel Gresley, now has a public square named in his honour.

To the city's south-west, standing high above a curve of the River Don, is imagination-sparking Conisbrough Castle. But for the used car dealerships that cluster around the limestone hill, the bedraggled ruin from the 11th-Century could be in remote Aberdeenshire or on Loch Ness. It is evocative and medieval like Dunnottar, turreted and crumbling like Urquhart.

In fact, it feels so Scottish that it inspired Scottish historical novelist Sir Walter Scott's swashbuckling adventure Ivanhoe, where is it recast as Coningsburgh Castle.

"In that pleasant district of Merry England which is watered by the river Don, there extended in ancient times a large forest… and the pleasant town of Doncaster," wrote Scott, and these words are stencilled high on the entrance hall wall inside the Danum, currently Doncaster's best portal to the mid-11th Century. 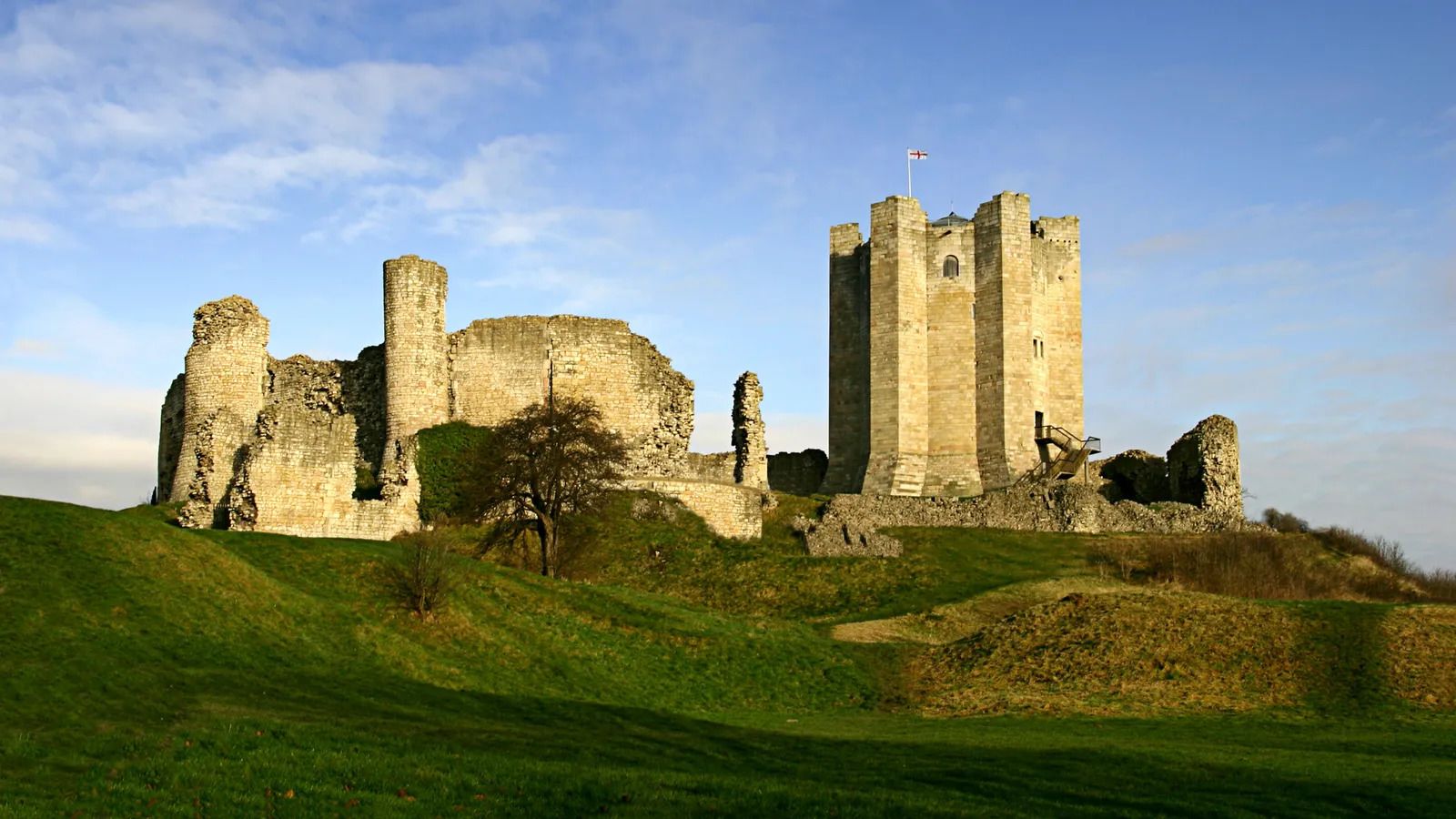 Now in ruins, Conisbrough Castle was the inspiration for the novel Ivanhoe

To get there, I even found myself walking down Scot Lane. I wondered if all these motifs spoke to a subconscious need to permeate the town with a hint of Scotland, even if only in subtle ways.

Before my visit to Doncaster, I also decided to canvas the sharpest minds in British medieval academia to get their views on the town's contentious backstory, reaching out to professors, academics and the National Museum of Scotland. And in reappraising the relationship between Stephen and England and David and Scotland, there appeared to be one dominant school of thought. It was a fascinating story, yes, but also one that remains mired in historical half-truths.

Quite how solid the border really was is debatable, and quite where Scotland stopped and England began, not necessarily clear

"While, technically, I guess Scotland never ceded Doncaster back to England, it had never necessarily been Scottish at any point," Dr Stephen Marritt, an expert on the reign of King Stephen from the University of Glasgow, told me. "Around this time, the Normans had really only moved into English Cumbria just before 1100 and right across the border there was, to some extent, a society with more in common with each other than the rest of England or Scotland. Quite how solid the border really was is debatable, and quite where Scotland stopped and England began, not necessarily clear."

Another take was offered by Professor Richard Oram, lecturer in medieval and environmental history at the University of Stirling.

"The David I and Henry story is a fascinating one, even if the 'Doncaster-is-still-Scottish' aspect is, sadly, nonsense," he replied by email. "All of the lands given to David and Henry by King Stephen by the Treaty of Durham were held as fiefs of the English Crown, not as annexed territories of Scotland, and were lost when David and Henry broke the treaty in 1138 (when they invaded northern England twice). And huge 'what-ifs' surround it. What would have happened if David I had captured York, which he nearly did? Or Henry II of England had honoured his promise and left the King of Scots in control of the north? So, this story is all built on a misunderstanding of the post-1138 situation."

In the train leaving Doncaster, my head was scrambled by what ifs and why nots. What I had wanted from the town was clear-cut answers, but I left instead with a cluster of complex, time-misted theories.

Which is to say the coda, of a sort, is that this persistent legend shouldn't be a footnote in history. It is more of a transition point, telling those keen to delve deeper into British history about 12th-Century England and Scotland, the nature of barons, land ownership and fiefdoms, the civil war of King Stephen's reign and the battle for northern England. And, perhaps, that might be the best way to see it.