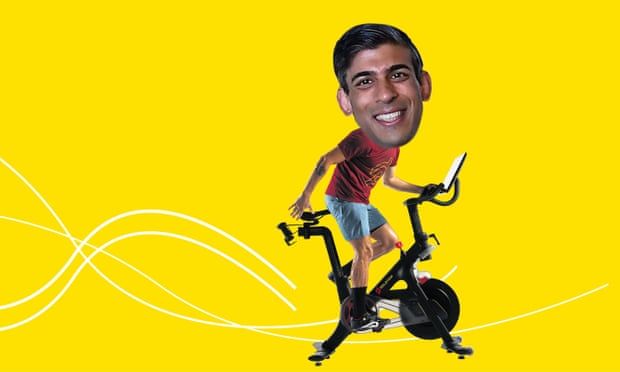 The Rishi Sunak workout: why his day begins with Britney, Peloton and blueberries

Boris Johnson is a runner (of a sort), while Dominic Raab practises karate. Now comes a surprisingly detailed account of how mornings start in No 11 Downing Street

Age: Sunak, the chancellor, is 41. He has been doing this workout since he got his Peloton last year.

Peloton? Stationary exercise bike with a digital screen. You buy the bike (from £1,750), you get a subscription (Peloton all-access membership costs £39 a month), and you’re off!

None of which will trouble the Sunak personal budget? Well, no. Sunak’s wife, Akshata Murty, is richer than the Queen. But this is about health, not wealth.

Go on, then. How does the Rishi Sunak workout go? He says that being chancellor has messed with his regime, but, when he can, he’s up at 6am and on the bike. He told the 20 Minute VC podcast his favourite instructor is Cody Rigsby.

Cody Rigsby? A 33-year-old New York dancer, who describes himself, to his 760,000 Instagram followers, as an “opinionated homosexual”. With Cody “you do have to listen to a lot of Britney”, said Sunak. “But you know, no bad thing in trying to get you motivated, I guess”.

Cody’s a Britney Spears fan? He has been known to get his clients to picture themselves as the singer in her Toxic video, striding through lasers, wearing a red wig.

I’m trying to picture Sunak doing that, in a red wig … Struggling, to be honest. Try with a red briefcase; is that easier? And he’s been trying to diversify. Try different instructors, such as Leanne Hainsby, who comes recommended by Sunak’s daughters. “But Cody is my go-to,” he said. Loyally.

Anything else in the Sunak healthy lifestyle we need to know about? After his workout, he’ll normally breakfast on Greek yoghurt, but because he observes an intermittent fasting diet, he can occasionally splurge on something sugary like …

Gregg’s for the elite? Kinda. Then at the weekend anything goes, and breakfast chez Sunak involves waffles, pancakes, with bacon, berries – blue and straw.

And how does The Rishi Sunak workout compare with other senior government fitness regimes? The prime minister runs, sort of, sometimes with Dilyn the dog. As well as cycling, generally in the wrong place.

Waffles? Yes, plenty. Michael Gove runs, too, in his own special way, inspired by Forrest Gump and Mr Bean. Dominic Raab, master of the dark arts, is also master of a martial one: a karate black belt. And the Priti Patel workout is a kind of super-fun game: she chases you, right out of the country.