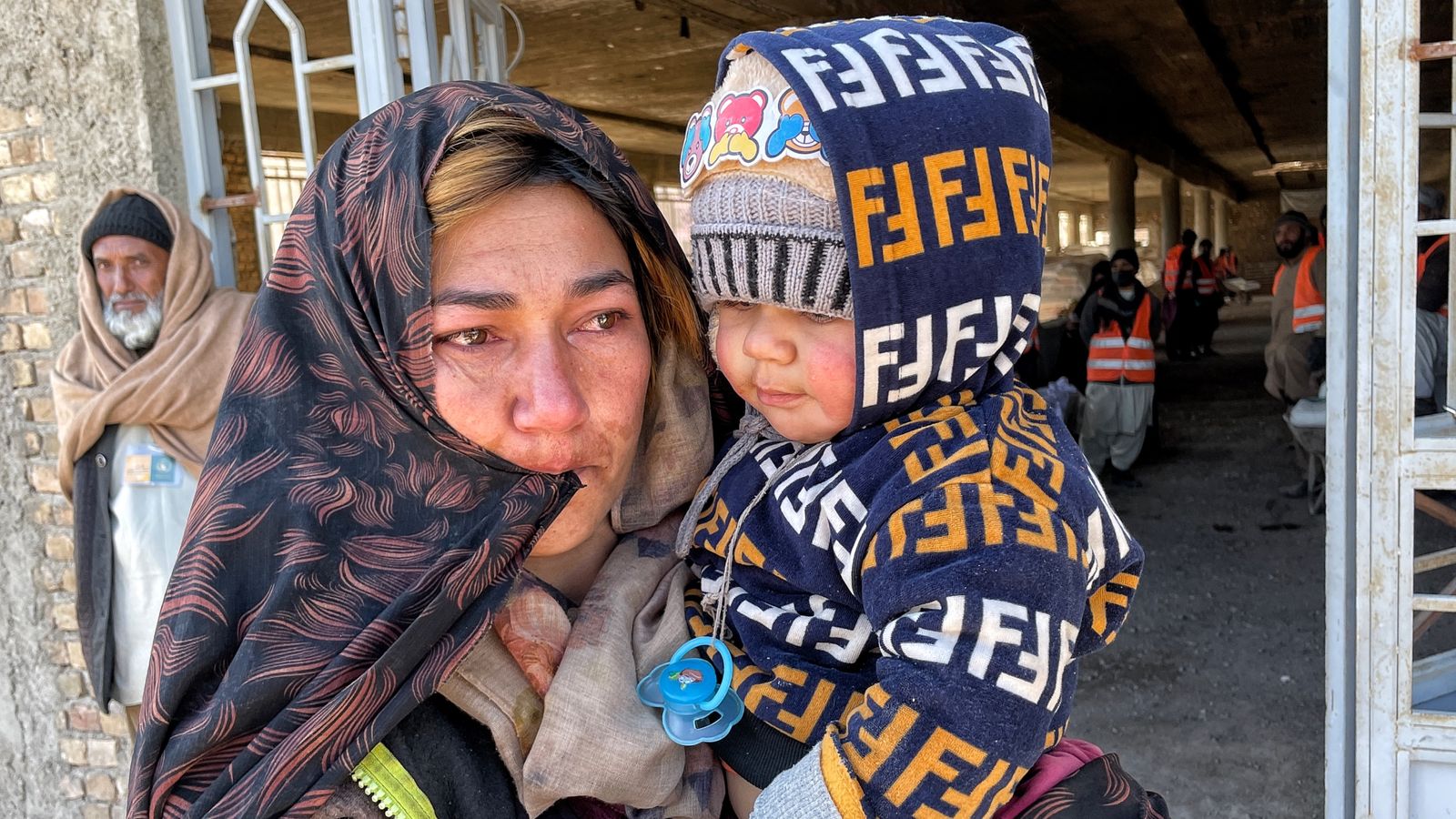 The results of 20 years war crimes against humanity in Afghanistan: Parents sell children and kidneys to feed starving families

After the withdrawal of Western forces from Afghanistan last year, the Taliban regime took over but has not received international recognition. Afghans are now resorting to desperate measures to feed themselves as aid struggles to reach them.

In our first few days in Herat, we've met whole families who've sold their kidneys so they can eat.

In one case, three brothers and their two sisters told us they flogged their organs for around £1,150 a piece to buy food for the rest of the family.

We've sat with a mother grieving over her toddler who starved to death. We've heard multiple parents tell us how they're now resorting to selling their children. 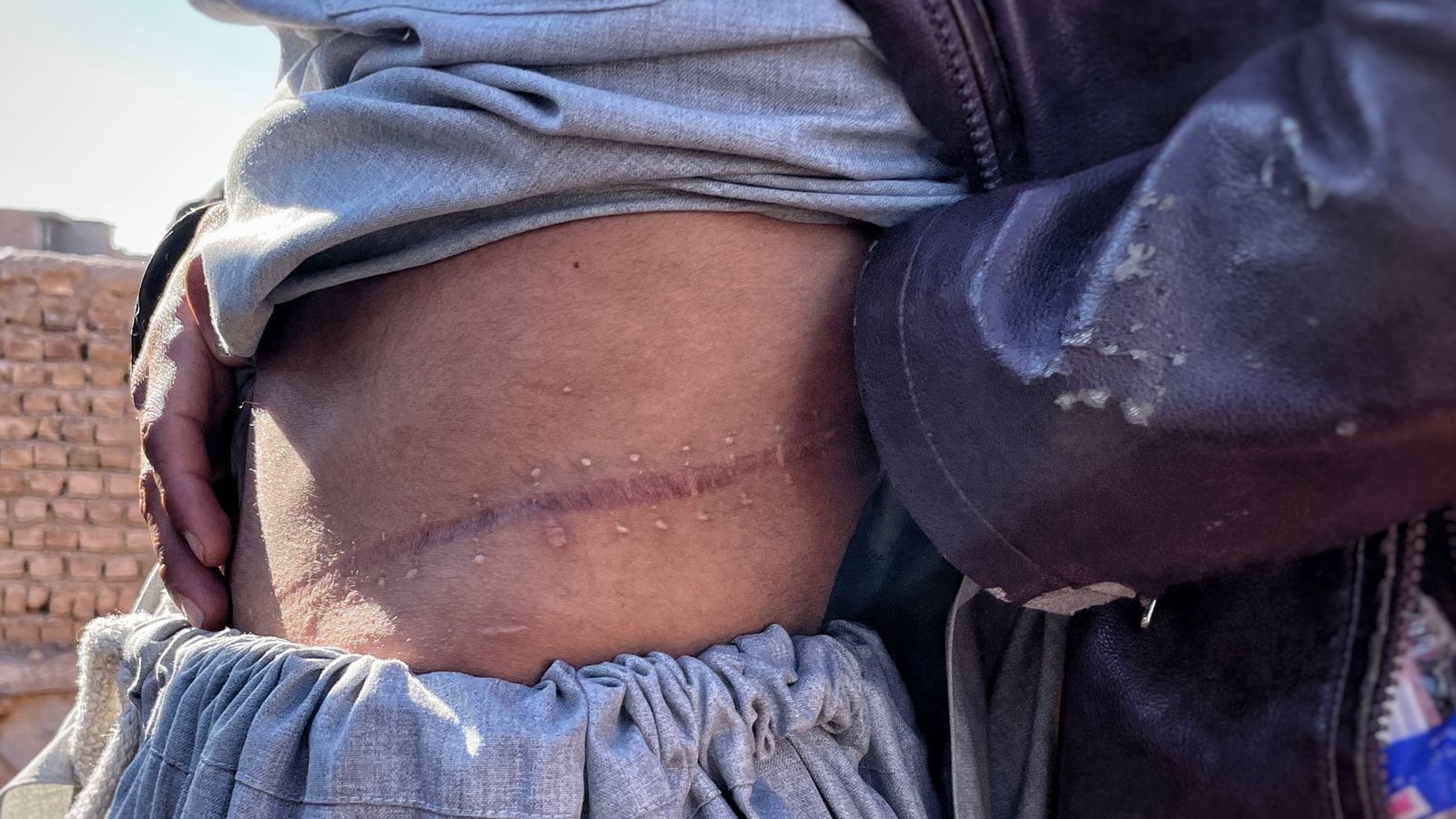 A close up of one man's kidney operation scar. 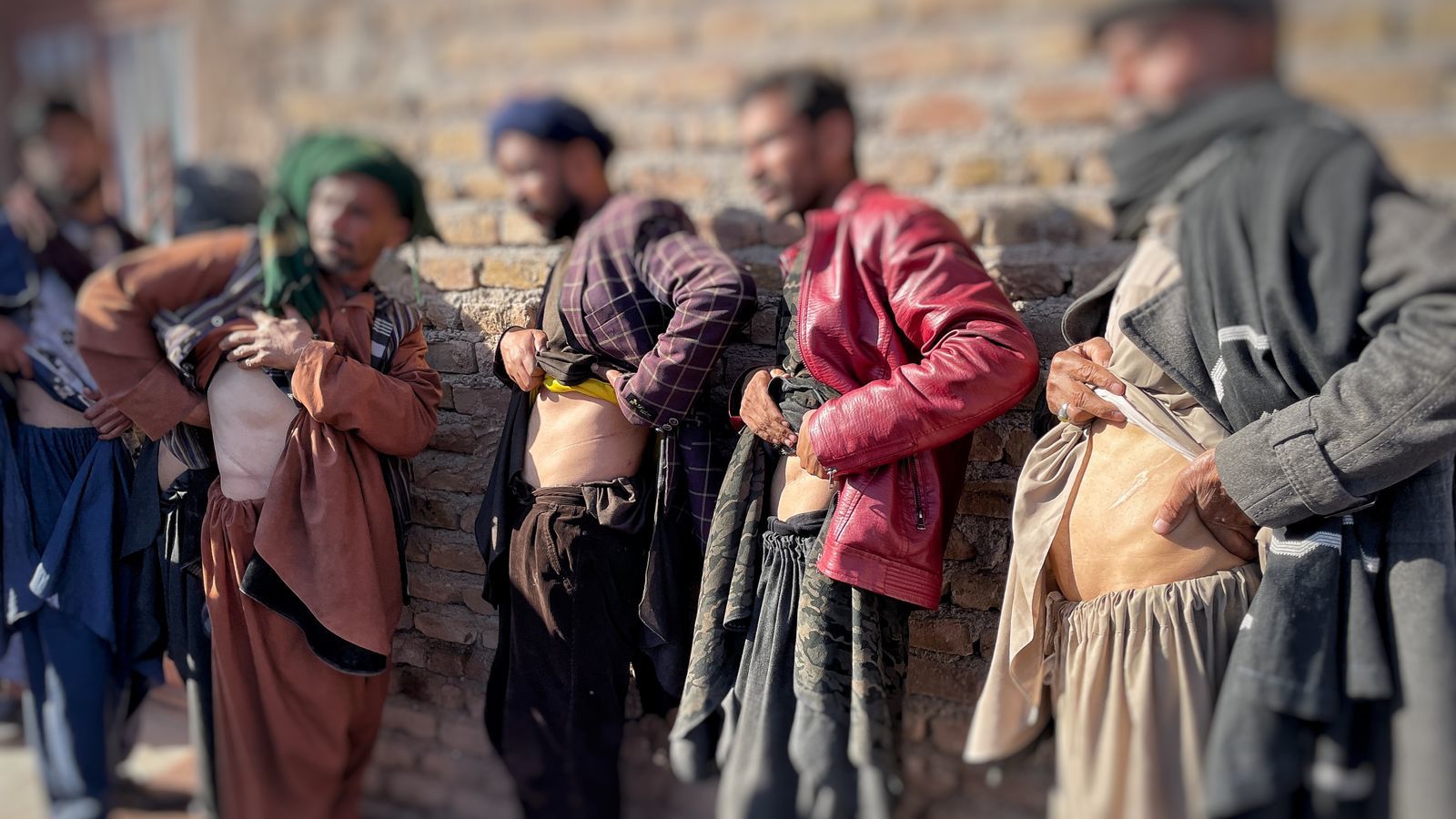 And we've spoken to emotional doctors who tell us they can't afford even the dressings for infected wounds nor the basic tools to do life-saving operations.

This is Afghanistan post-pull out for foreign troops. This is the country in which a coalition of nations spent 20 years, shelling out billions of dollars to "rebuild it".

This is the nation where so many lives were sacrificed - thousands - both foreign troops and ordinary Afghans. 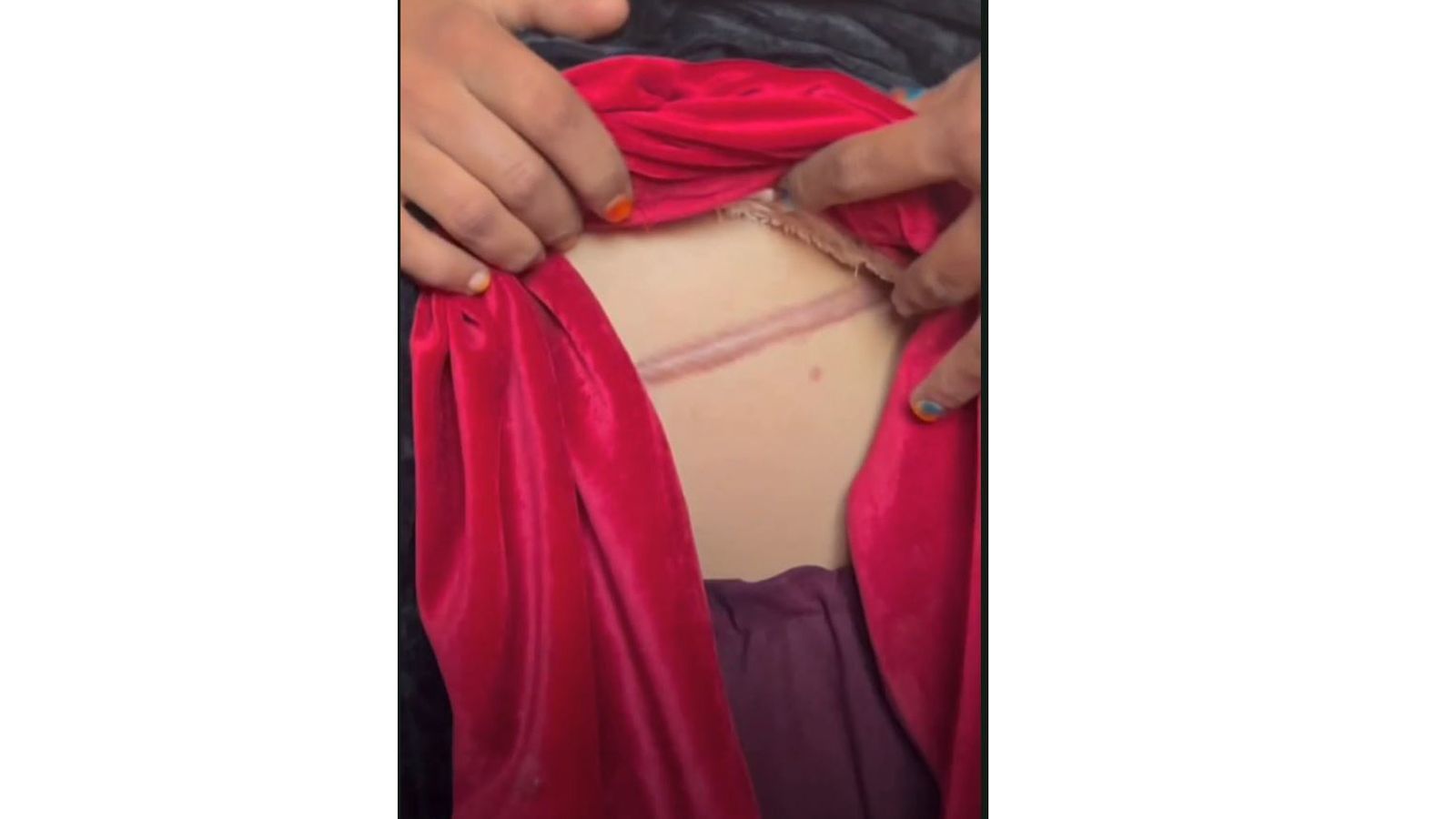 One woman shows the scar from surgery to remove a kidney

This is the part of the world which the United Nations now says is fast becoming the centre of the globe's worst humanitarian disaster.

Afghanistan was poor and in difficulties before the chaotic withdrawal of foreign troops last August.

Now, with the Taliban in power and the rest of the world still not officially recognising the legitimacy of their government, it's the Afghan people who're having to resort to ever more extreme measures to survive.

The desperation in communities

In a small village community outside Herat, we saw the desperation and desolation of poverty.

We're concealing the exact location of the village and protecting the identities of all the villagers who spoke to us for their own safety. Our arrival along with the village elder prompted streams of people to come out of their mud houses and tents.

Within minutes, old women were thrusting medical documents into our hands pleading with us for help while mothers clutching babies begged us for food. 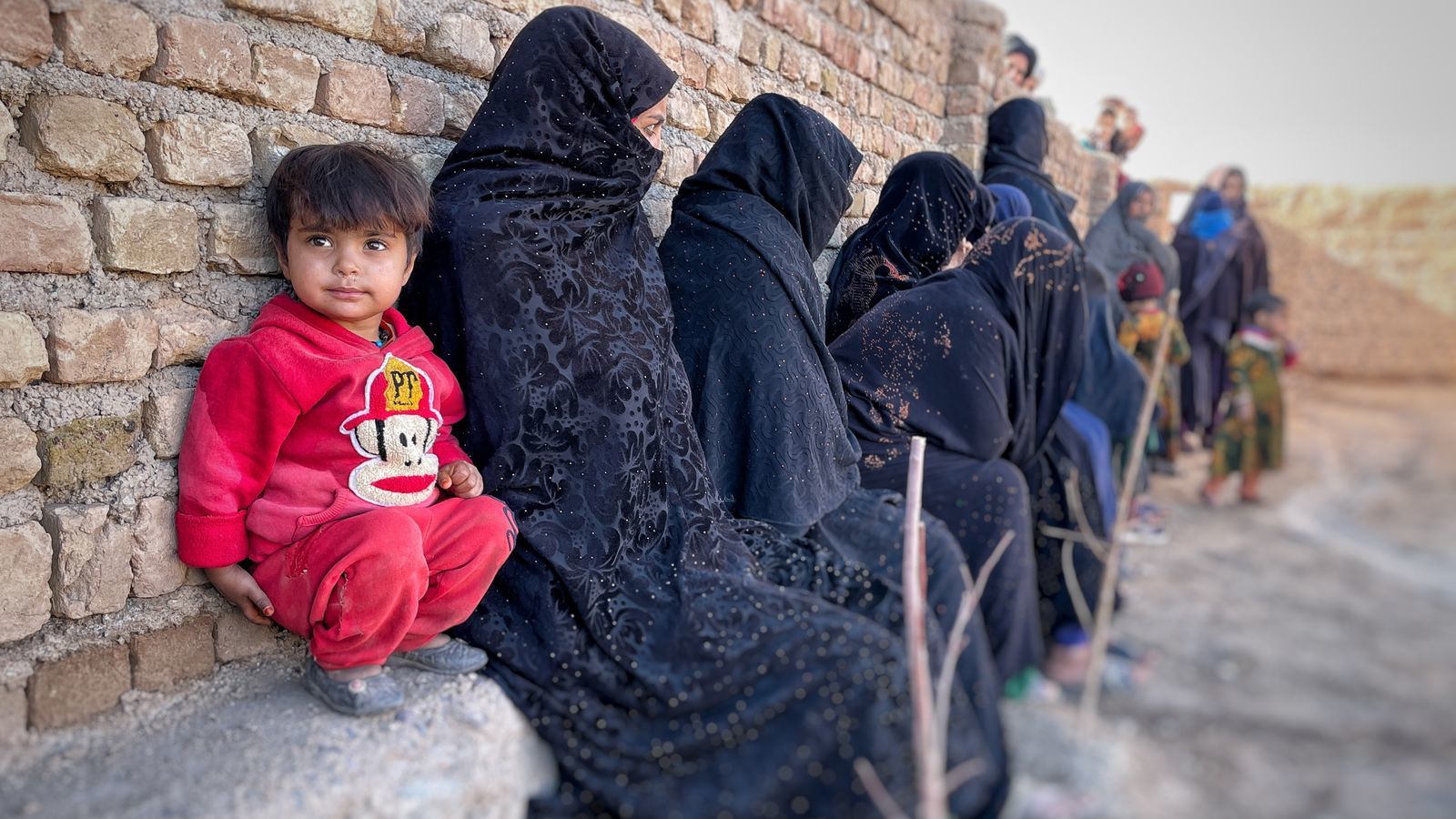 The humanitarian situation is getting truly desperate for millions of Afghans.

Rows of people of varying ages and with a variety of chronic diseases and disabilities were lined up for us to see - each one with a relative urging us to somehow deliver some hope and relief to them.

This area seems to us utterly barren, with no water or shrubbery for miles around. In many cases the only currency these families have is their organs - and with so many having already resorted to selling them, it's now their young who're being put on the market.

We spoke to a mother and father who've both sold their kidneys.

All they'd got left to sell now was one of their eight children - so they were thinking the unthinkable. The 25-year-old mother told us: "About six months ago, my three-year-old son died of hunger. I can't see them all lose their lives... at least this way, someone else will feed them." 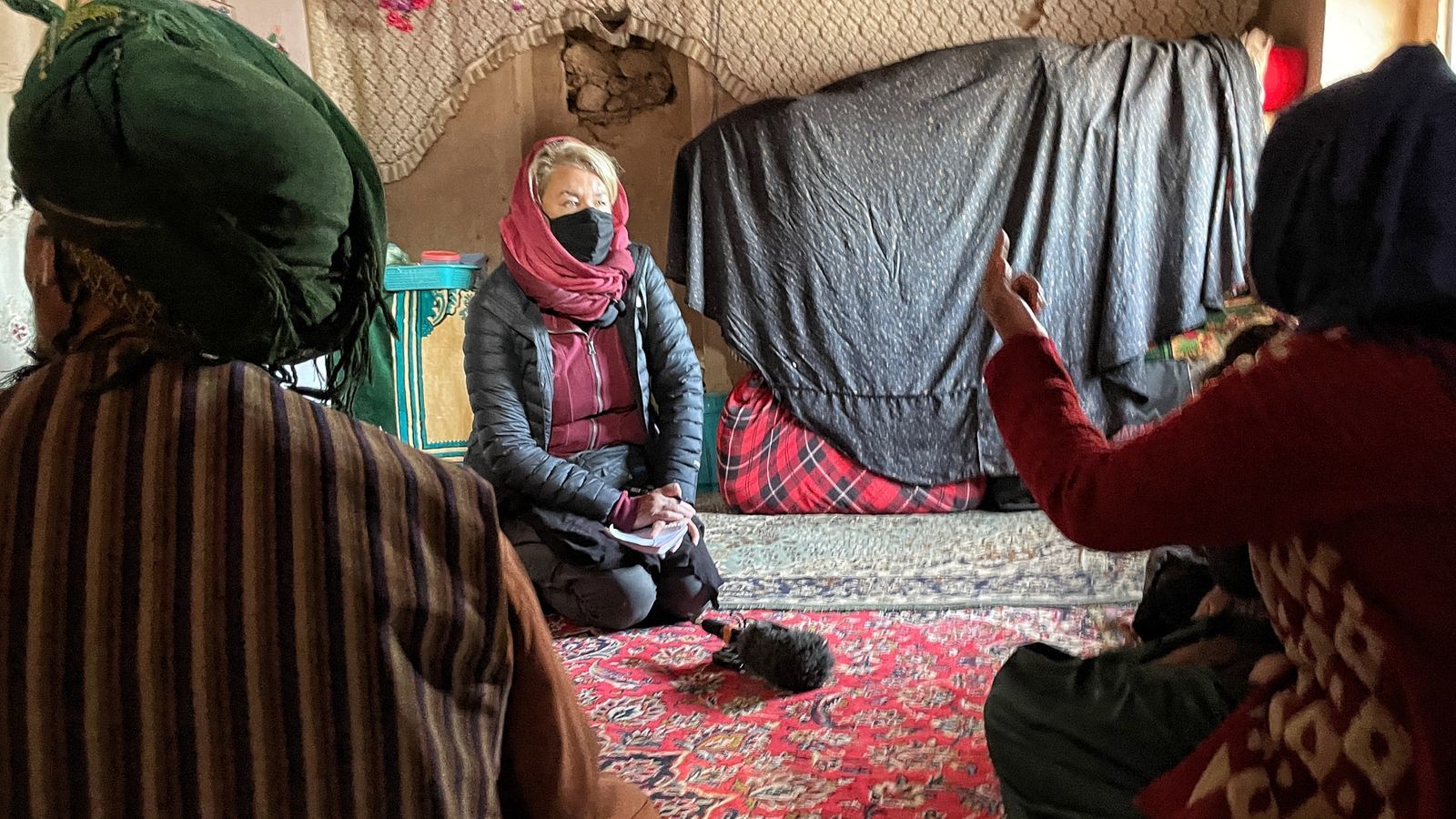 Alex Crawford talks to mother and father who have already sold their kidneys and are now thinking of selling a child because their situation is so desperate.

Her voice was breaking with emotion as she told us. Her husband told us he hadn't yet decided which child to sell but such was their desperation he would sell the child off for less than the price of his kidney.

Taliban say it is a 'myth'

The Taliban says this is all a Western myth, dreamed up by evil, dishonest Western media to discredit them.

They also say all girls in the country are in education, that schools and universities are all open and they're not rounding up female activists or carrying out vendettas against those who worked with the foreign troops once stationed here for two decades. 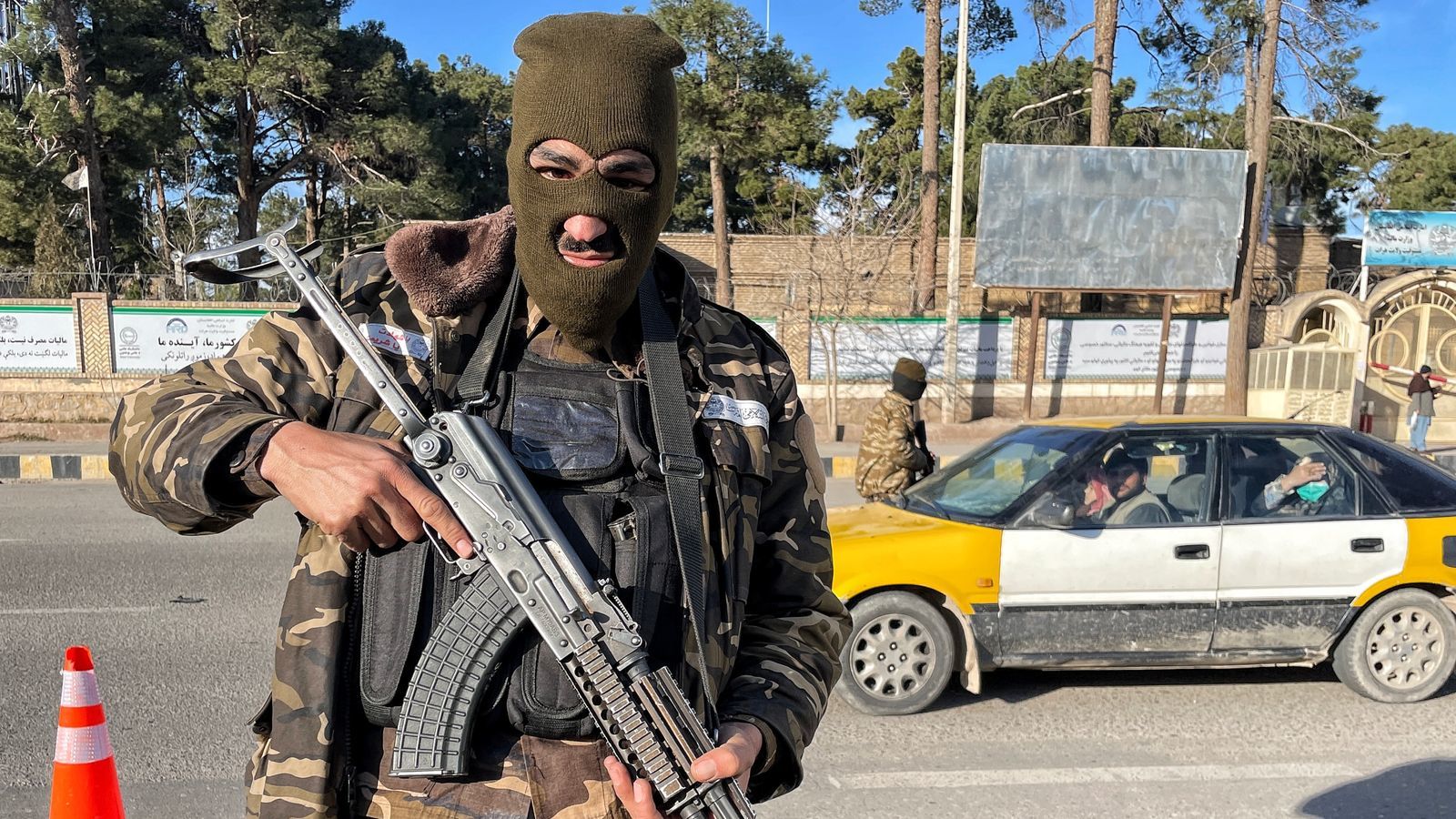 Taliban at a checkpoint.

The Taliban appear to have "alternative facts" to what many others are living through on the ground in Afghanistan.

The rapid withdrawal of foreign troops in August saw the Taliban sweep into power. The international community imposed sanctions and billions of dollars-worth of assets were frozen in overseas bank accounts, mostly American.

It's meant the economy has virtually collapsed with few jobs and very little hard currency available for ordinary Afghans.

The lack of worldwide recognition of the Taliban government has meant a country which was previously almost wholly dependent on foreign aid has seen that all but dry up.

And respect for women's' rights has repeatedly been cited by global donors as a condition for restoring that aid.

But the dilemma for the international community is trying to balance the pressure exerted on the Taliban to respect human rights, against the obvious and deepening suffering of the Afghan people.

The little aid which is seeping in is not nearly adequate for the millions who need it.

Hospitals run out of treatments

So, in the Herat Regional Hospital in Herat City, we found doctors like Dr Mohammad Aqel Halimee emotional and tearful over not even having enough dressings to bandage his young patients in the children's ward of the hospital's burns unit. 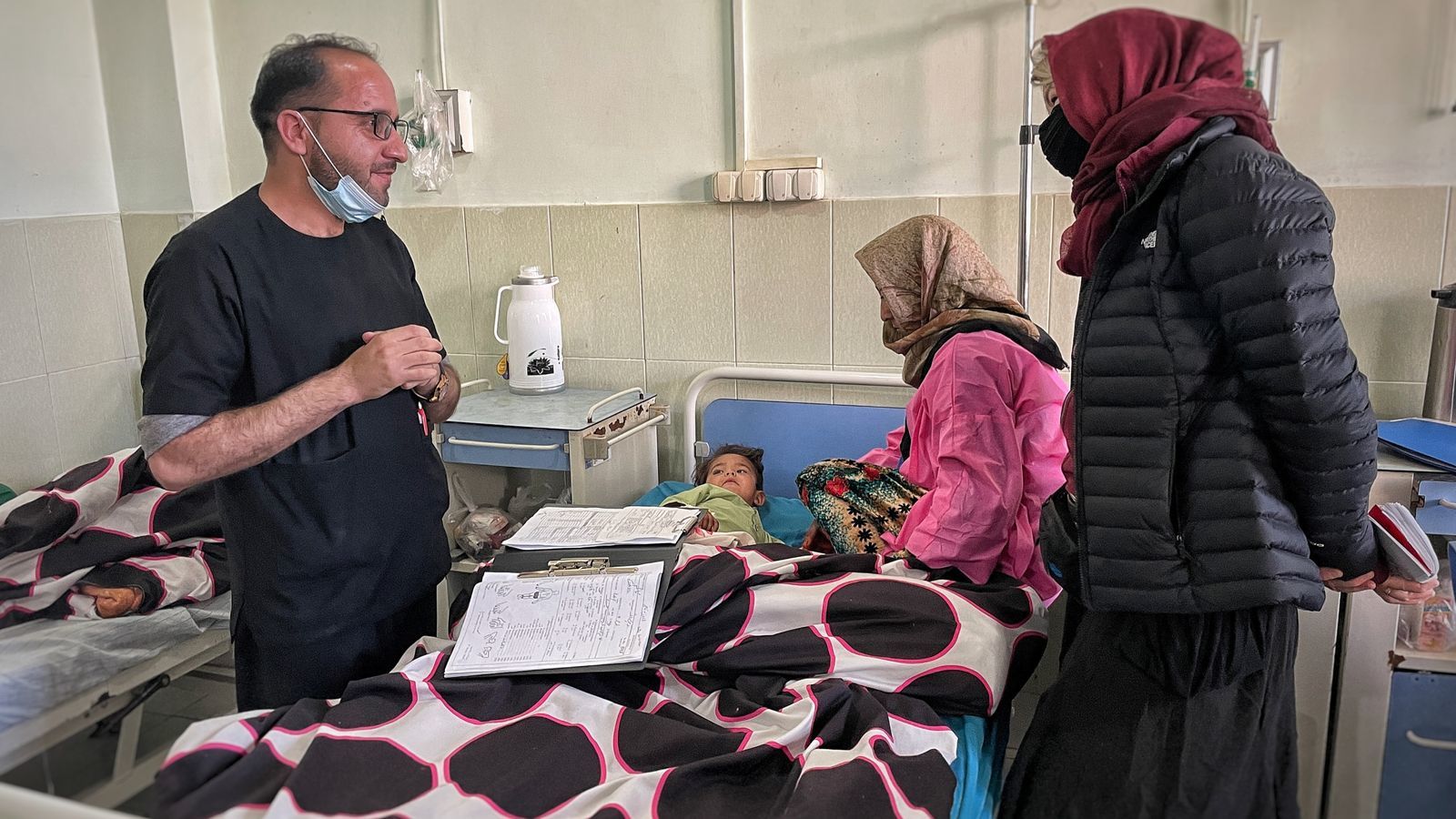 Many have badly infected injuries caused by deep burns from open fires which families use to try to keep warm in mid-winter.

But with most parents unable to pay for the medicines or bandages, never mind expensive surgeries, their children are often sent home to die.

Dr Aqel said the medics suffer badly from the emotional toll taken on them. 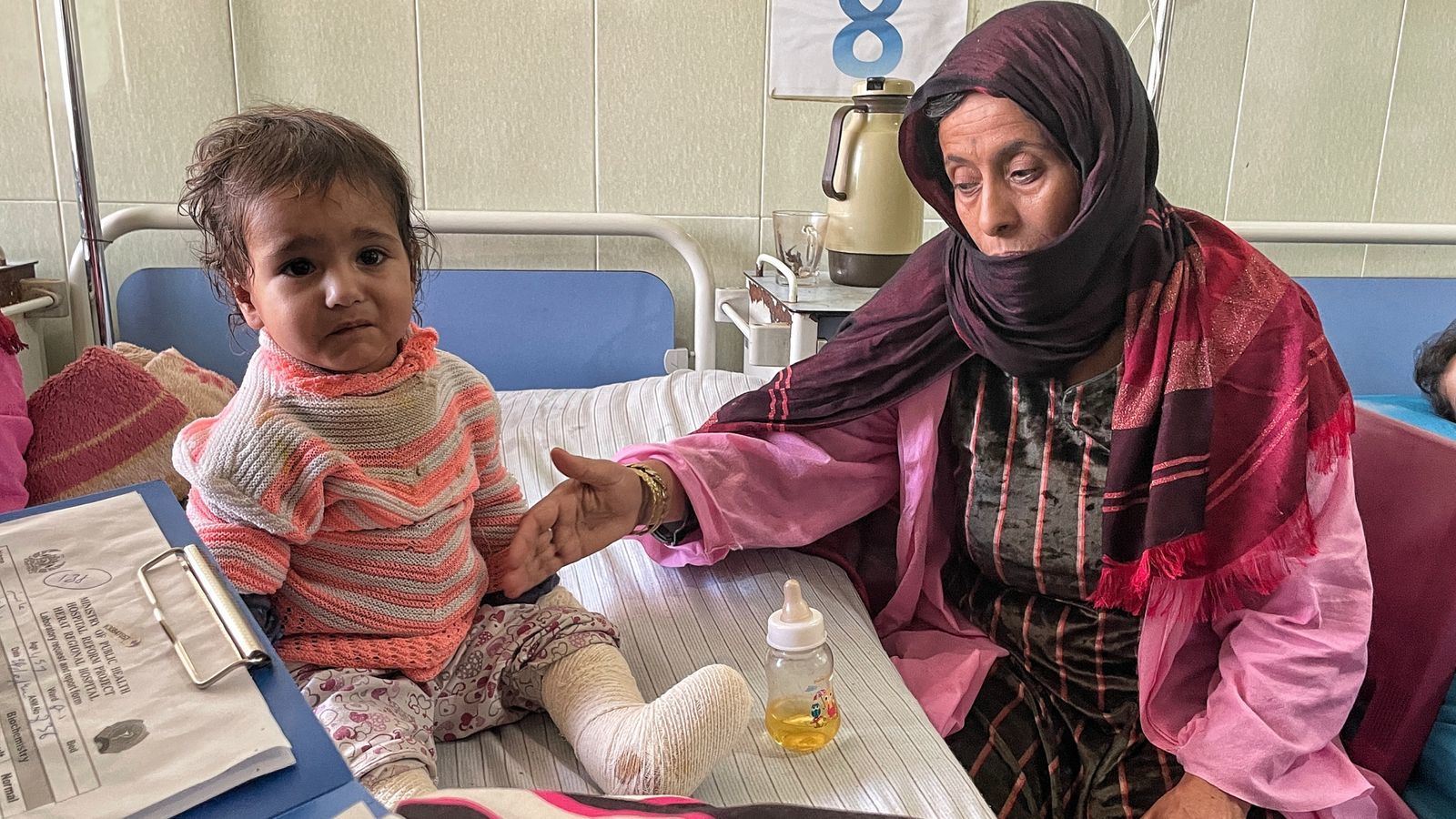 A girl called Aisha at the burns unit of Herat hospital, who is at risk of dying if she cannot get medical supplies.

Many kidney buyers from across border

In the village community on the outskirts of Herat city, I was allowed into a room to see a group of women who'd all sold their kidneys.

In this highly conservative society, they wouldn't even show their faces in public, never mind their bare midriffs - but they allowed me to film them so long as their faces weren't shown.

Many of them were still teenagers or in their early twenties and already had multiple children. I noticed a number of them were pregnant again.

But there's a lucrative kidney trade in this area with the region's proximity to the Iranian border and many of the buyers are from across the border - and this extreme poverty has driven more Afghans onto the operating tables to try to wipe out debts and provide food for their families. 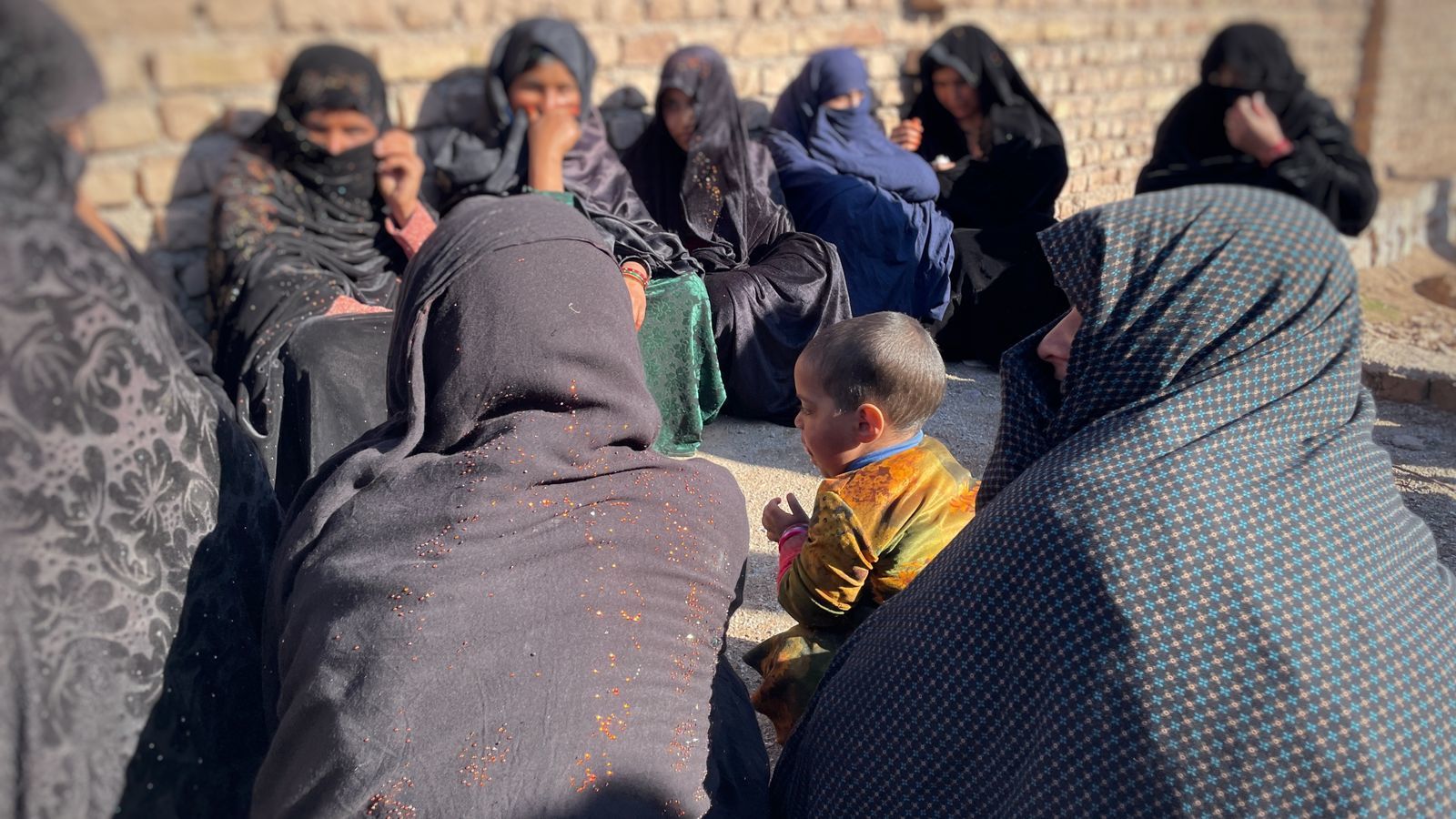 A group of women from the same village who have all sold a kidney for money.

Since the Taliban came into power, there's apparently been a clamping down on kidney transplants but our investigations seem to indicate this has just sent the trade deeper underground.

Many were nervous about talking to us about it because of fears over repercussions from the Taliban who are attempting to portray a certain image to the outside world.

'We have no choice'

One teenage mother told us she'd been operated on about a month ago.

The angry, red weal of her scar seemed to back this up.

"We have no choice," she said, "We do this to feed our children."

The village elder did his best to try to persuade the couple not to sell any of their children, a number of whom were sitting with us listening to this discussion.

And then he turned to us.

"I urge the world, please don't leave us alone," he said. "Stop this tragedy of people selling their children or part of their bodies. Afghanistan needs help."