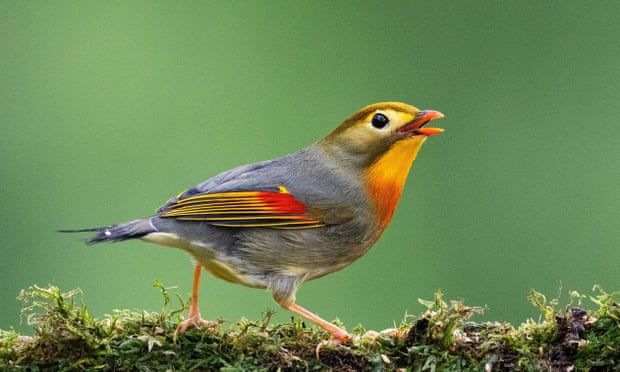 ‘The next parakeet’: Britain’s dawn chorus at risk from Asian songbird

A brightly coloured subtropical songbird from Asia could colonise Britain’s gardens and change the dawn chorus for ever, a new paper warns.

The highly invasive red-billed leiothrix could threaten native bird populations, particularly competing with garden birds such as the robin and blackbird, researchers say. Early signs suggest this little bird – olive green with a bright red beak and yellow throat – may already be establishing itself in gardens and woodlands in southern parts of the country.

The main cluster of sightings is around Wiltshire and Somerset, with a handful of reports coming from farther afield in south Wales, Merseyside and Kent, according to a new paper published in the journal Ibis. Also known as pekin robins in the caged bird trade, it is likely these populations have escaped from captivity, but it is not yet known if they are breeding.

The red-billed leiothrix’s European range has doubled in two decades, with populations now established in Italy, Spain, Portugal and France. As the climate crisis escalates, the climate of southern Britain is increasingly favourable to them. “This could be the next ring-necked parakeet – it’ll be a change people notice,” warned lead author Richard Broughton from the UK Centre for Ecology and Hydrology, who said they could become a familiar sight on garden bird tables. 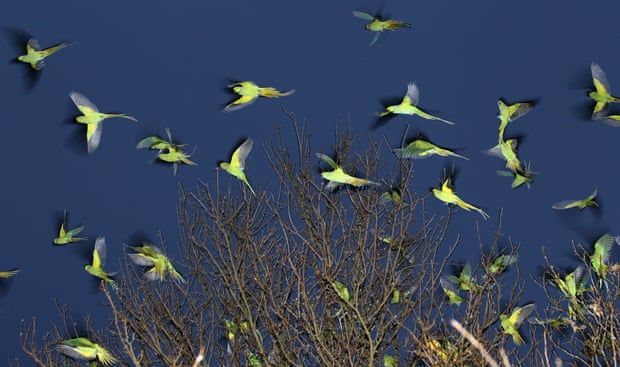 There were 16 records of wild red-billed leiothrixes in southern Britain between 2019 and 2022, with 10 of those coming from the cluster, according to the paper. Researchers found records by searching social media and Google images. Broughton said: “There will be many more which we have not heard about, probably because people haven’t reported them, or they haven’t noticed them. So this is likely to be an underestimate. Picking up this cluster of records just from social media is alarming.”

Despite having a loud and beautiful song (they are also known as the Japanese nightingale), red-billed leothrix populations are elusive and usually go unnoticed for years before they are discovered, and then tend to dramatically increase in number, research from Europe suggests. Broughton said: “All of a sudden these populations of birds can explode to become very common. In some woods in parts of the continent they are the most common woodland bird after about 20 years. They become dominant over everything.” 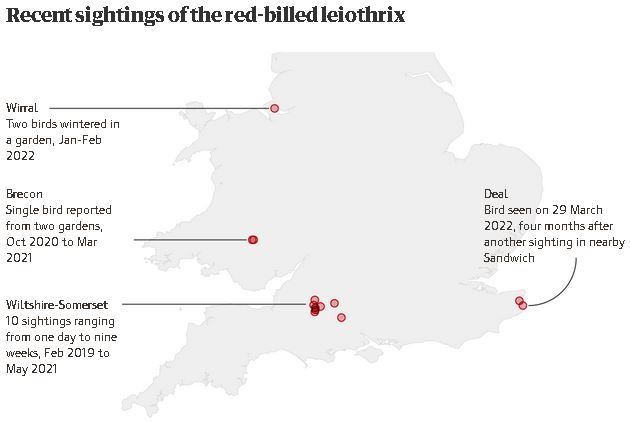 The red-billed leiothrix has similar lifestyle, singing, nesting and feeding habits to robins, blackbirds and blackcaps, meaning it poses the greatest threats to these birds. They appear to like peanuts, sunflower hearts, suet blocks, apple and fat balls, and have been seen taking food from bird tables and hanging feeders.

Unlike robins and blackbirds, which are territorial, red-billed leiothrixes nest communally so they can breed in high densities, becoming extremely populous in small areas. They also have a loud song which means they could dominate soundscapes, with researchers warning “its loud and frequent song could significantly alter the soundscape of Britain’s dawn chorus”.

The 15cm-long bird’s native range is in south-east Asia, spanning the Himalayas in India and Nepal, over much of China, Myanmar and Vietnam. Its preferred habitat is humid forests, dense thickets and scrublands. Red-billed leiothrixes became established in Europe at the end of the 20th century and are now common in more than 37 different regions. 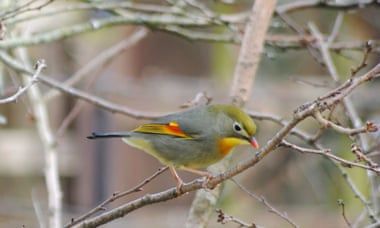 For more than a century, these popular caged birds were brought into the UK until there was an import ban in 2005. They still exist in captivity but are not abundant. Attempts to release the bird into the wild between 1900 and 1939 were unsuccessful. There have been other wild sightings of the bird but no indications they were getting established.

As well as the warming climate, the increase in people feeding birds in their gardens is also likely to have helped them make it through winter. Broughton said: “I have mixed feelings about this bird getting established. It’s a beautiful bird, and it has a beautiful song, but we don’t know what effect it’s going to have before it’s too late. Non-native species are never a good thing, sometimes they’re neutral, but they’re never positive.”

He said it could be virtually impossible to remove them, but encouraged people to report possible sightings to iRecord and the British Trust for Ornithology’s BirdTrack to help researchers detect and publicise the whereabouts of this new species.

Tom Stewart from BTO said species introduced beyond their natural ranges result in increased competition, habitat change, predation, hybridisation and disease. He said: “Careful monitoring of red-billed leiothrix numbers in the UK will be key to predicting how this new arrival might affect our native ecosystems – we need to gather data on all species over long timescales if we are to understand the ways their populations interact.

“Climate change and other impacts of human behaviour have made it easier for some species to colonise new areas, so understanding these will also play an important role.”