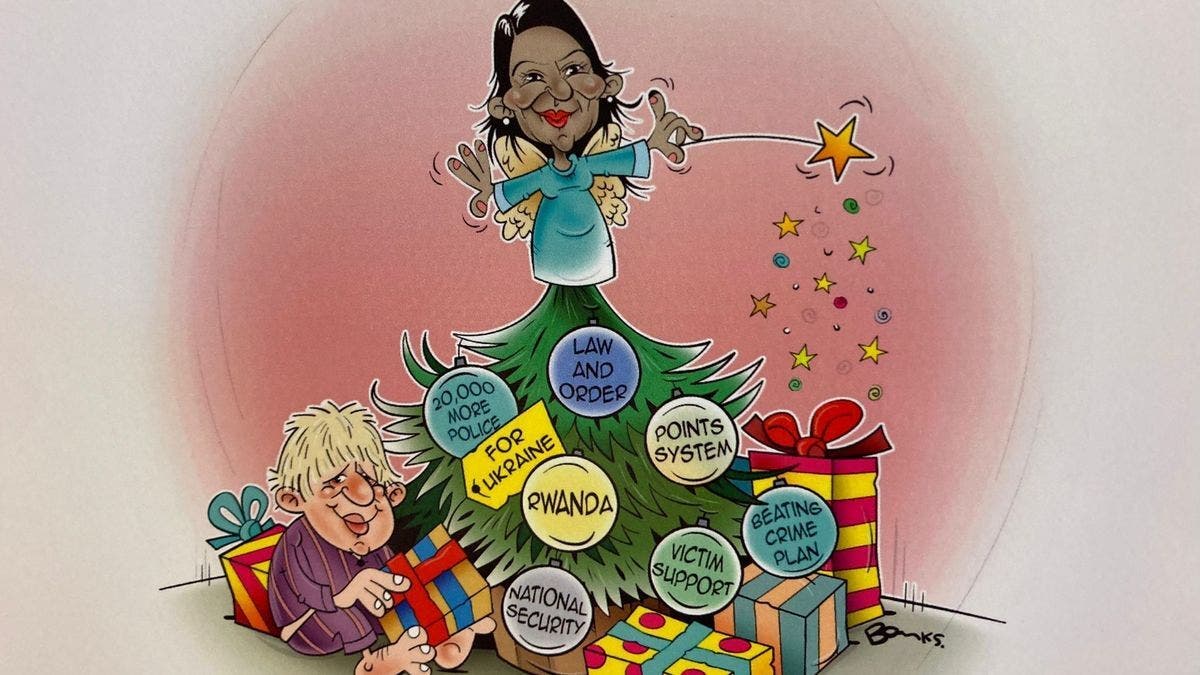 The kickback of her life: Priti Patel criticised over Rwanda deportations Christmas card, missing the point that she celebrate her personal rewards from the deal

A Christmas card that appears to be from Priti Patel and depicts her as a cartoon fairy celebrating Rwanda deportations has been slammed for lacking “basic human decency”.
The card shows a caricature of a barefoot Boris Johnson sitting at the bottom of the decorated tree as the former Home Secretary waves a wand over baubles inscribed with phrases such as "Rwanda", “law and order”, “beating crime plan” and "national security”.

A second design circulating Parliament shows a pile of presents decorated with gift tags including "expanded taser use”, “stop and search" and "immigration plan".

A Labour source said: “On Priti Patel’s watch just one in every 100 suspected sex offenders faced justice while she completely lost control of the asylum system.

“The gift the Tories could give this Christmas is finally getting a grip on the chaos they’ve forced onto the country.”

The cards have been handed to some staff and journalists working in Parliament.

Lib Dem MP Alistair Carmichael said: "We have seen Priti Patel’s lack of basic human decency time and time again - why should we expect anything less at Christmas time?"

“This is the Christmas card of someone who read the nativity story and thought King Herod had the right idea.

“If Priti Patel had been around, Mary, Joseph and Jesus would have been on their way to Rwanda before the three wise men could arrive.”

Ms Patel was Home Secretary from July 2019 until September 2022 when she was replaced by Suella Braverman.
Her controversial Rwanda plan

, announced by the government in April, intended to deport some asylum seekers who crossed the Channel into Britain to the central African country to claim asylum there instead.

It faced a legal challenge, but the High Court on Monday ruled that the policy was lawful.

However the Home Office was criticised for not properly considering the asylum cases of people it planned to deport.

The plan has also been condemned by MPs on both sides of the house and Church of England bishops, who described it as "immoral".

The cards are separate to the one designed by a child from Ms Patel's Whitam constituency.

The Tory MP has run a competition to design her official Christmas card with local primary schools every year since 2010 and this year it was won by a 10-year-old from the Essex town.
#Boris Johnson  #Priti Patel  #Johnson
Add Comment