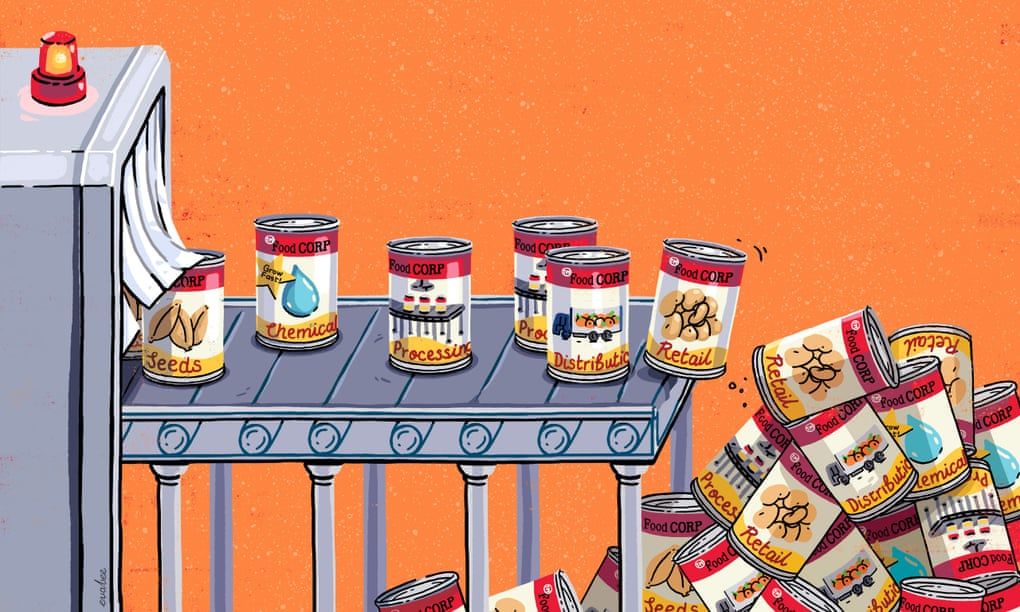 Massive food producers hold too much power – and the regulators scarcely understand what is happening. Sound familiar?
For the past few years, scientists have been frantically sounding an alarm that governments refuse to hear: the global food system is beginning to look like the global financial system in the run-up to 2008.

While financial collapse would have been devastating to human welfare, food system collapse doesn’t bear thinking about. Yet the evidence that something is going badly wrong has been escalating rapidly. The current surge in food prices looks like the latest sign of systemic instability.

Many people assume that the food crisis was caused by a combination of the pandemic and the invasion of Ukraine. While these are important factors, they aggravate an underlying problem. For years, it looked as if hunger was heading for extinction. The number of undernourished people fell from 811 million in 2005 to 607 million in 2014. But in 2015, the trend began to turn. Hunger has been rising ever since: to 650 million in 2019, and back to 811 million in 2020. This year is likely to be much worse.

Now brace yourself for the really bad news: this has happened at a time of great abundance. Global food production has been rising steadily for more than half a century, comfortably beating population growth. Last year, the global wheat harvest was bigger than ever. Astoundingly, the number of undernourished people began to rise just as world food prices began to fall. In 2014, when fewer people were hungry than at any time since, the global food price index stood at 115 points. In 2015, it fell to 93, and remained below 100 until 2021.

Only in the past two years has it surged. The rise in food prices is now a major driver of inflation, which reached 9% in the UK last month. Food is becoming unaffordable even to many people in rich nations. The impact in poorer countries is much worse.

So what has been going on? Well, global food, like global finance, is a complex system, that develops spontaneously from billions of interactions. Complex systems have counterintuitive properties. They are resilient under certain conditions, as their self-organising properties stabilise them. But as stress escalates, these same properties start transmitting shocks through the network. Beyond a certain point, a small disturbance can tip the entire system over its critical threshold, whereupon it collapses, suddenly and unstoppably.

We now know enough about systems to predict whether they might be resilient or fragile. Scientists represent complex systems as a mesh of nodes and links. The nodes are like the knots in an old-fashioned net; the links are the strings that connect them. In the food system, the nodes include the corporations trading grain, seed and farm chemicals, the major exporters and importers and the ports through which food passes. The links are their commercial and institutional relationships.

If the nodes behave in a variety of ways, and their links to each other are weak, the system is likely to be resilient. If certain nodes become dominant, start to behave in similar ways and are strongly connected, the system is likely to be fragile. In the approach to the 2008 crisis, the big banks developed similar strategies and similar ways of managing risk, as they pursued the same sources of profit. They became strongly linked to each other in ways that regulators scarcely understood. When Lehman Brothers failed, it threatened to pull everyone down.

So here’s what sends cold fear through those who study the global food system. In recent years, just as in finance during the 2000s, key nodes in the food system have swollen, their links have become stronger, business strategies have converged and synchronised, and the features that might impede systemic collapse (“redundancy”, “modularity”, “circuit breakers” and “backup systems”) have been stripped away, exposing the system to “globally contagious” shocks.

On one estimate, just four corporations control 90% of the global grain trade. The same corporations have been buying into seed, chemicals, processing, packing, distribution and retail. In the course of 18 years, the number of trade connections between the exporters and importers of wheat and rice doubled. Nations are now polarising into super-importers and super-exporters. Much of this trade passes through vulnerable chokepoints, such as the Turkish Straits (now obstructed by Russia’s invasion of Ukraine), the Suez and Panama canals and the Straits of Hormuz, Bab-el-Mandeb and Malacca.

One of the fastest cultural shifts in human history is the convergence towards a “Global Standard Diet”. While our food has become locally more diverse, globally it has become less diverse. Just four crops – wheat, rice, maize and soy – account for almost 60% of the calories grown by farmers. Their production is now highly concentrated in a handful of nations, including Russia and Ukraine. The Global Standard Diet is grown by the Global Standard Farm, supplied by the same corporations with the same packages of seed, chemicals and machinery, and vulnerable to the same environmental shocks.
Advertisement

The food industry is becoming tightly coupled to the financial sector, increasing what scientists call the “network density” of the system, making it more susceptible to cascading failure. Around the world, trade barriers have come down and roads and ports upgraded, streamlining the global network. You might imagine that this smooth system would enhance food security. But it has allowed companies to shed the costs of warehousing and inventories, switching from stocks to flows. Mostly, this just-in-time strategy works. But if deliveries are interrupted or there’s a rapid surge in demand, shelves can suddenly empty.

A paper in Nature Sustainability reports that in the food system, “shock frequency has increased through time on land and sea at a global scale”. In researching my book Regenesis, I came to realise that it’s this escalating series of contagious shocks, exacerbated by financial speculation, that has been driving global hunger.

Now the global food system must survive not only its internal frailties, but also environmental and political disruptions that might interact with each other. To give a current example, in mid-April, the Indian government suggested that it could make up the shortfall in global food exports caused by Russia’s invasion of Ukraine. Just a month later, it banned exports of wheat, after crops shrivelled in a devastating heatwave.

We urgently need to diversify global food production, both geographically and in terms of crops and farming techniques. We need to break the grip of massive corporations and financial speculators. We need to create backup systems, producing food by entirely different means. We need to introduce spare capacity into a system threatened by its own efficiencies.

If so many can go hungry at a time of unprecedented bounty, the consequences of the major crop failure that environmental breakdown could cause defy imagination. The system has to change.
Add Comment