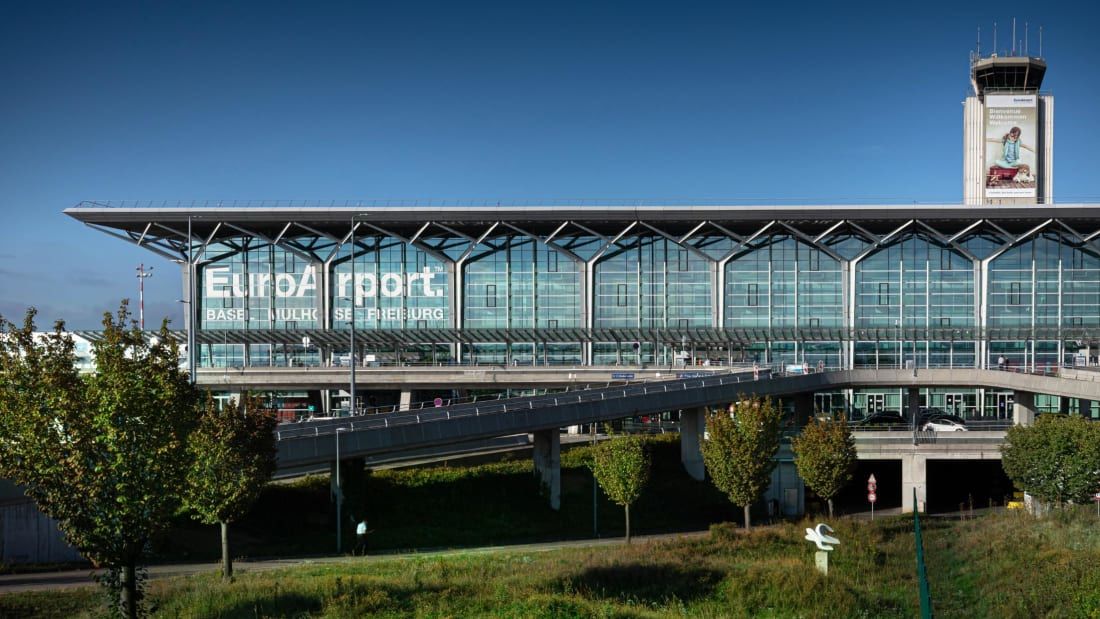 The airports that cross international borders

Those braving international travel in the Covid era are faced with navigating an ever-shifting maze of rules and restrictions.

If you want to avoid getting stranded for two weeks, you'd better check your documents are in order before crossing any international border. Even more so if your destination is one of a handful of airports in which you risk straying into the wrong country if you aren't careful when getting off the plane.

The following airports, or at least parts of them, are managed by more than one country, giving a whole new layer to the phrase "international" airport.

Euroairport Basel-Mulhouse-Freiburg (pictured top) is, unusually, an airport conceived from scratch as a bi-national facility.

Located right next to the spot where the borders of France, Switzerland and Germany meet, as its name indicates, Euroairport serves three different cities: Basel (Switzerland), Mulhouse (France) and Freiburg (Germany). Of these, Basel is the largest of the three and also the closest to the airport, something that is reflected in its IATA code, BSL.

Although the airport lies entirely on French territory, Switzerland enjoys some extraterritorial rights thanks to a special bilateral treaty which makes Euroairport, to many effects and purposes, a Swiss airport as well as a French one. Since the 1980s, German authorities have also been represented at some of the airport's governance organs.

In practical terms this means there is a French and a Swiss sector, with the divide cutting right through the middle of the terminal. Each sector has its own border and customs checkpoints, staffed by officers from the respective countries.

The airport, though, remains in French sovereign territory and French police forces are in charge of overall security.

The entry of Switzerland into the European Union's Schengen visa area softened this divide and, since 2008, it's been possible to walk unimpeded between the two sectors land-side.

Most services in the terminal are available in either their French or Swiss versions depending on which part of the facility you find yourself in.

Shops and cafés in the French sector trade in euros, while their counterparts across the hall take Swiss francs (prices and brands available also match those of their respective countries). And although rarely in use nowadays, phone booths and postboxes reflected, for many years, this national divide as well.

Switzerland-bound travelers can reach Basel through a special road which runs through French territory but is free of border checkpoints because it'd covered by the provisions of a bilateral treaty that allows Swiss urban buses to reach the terminal.

These arrangements were recently put to the test when France and Switzerland implemented different Covid-related entry requirements. At some points during the pandemic, travelers coming into France, for example, were expected to undergo a test, whereas Switzerland did not require tests but mandated quarantines. The matter was solved by physically segregating Swiss-bound travelers for the duration of these measures. 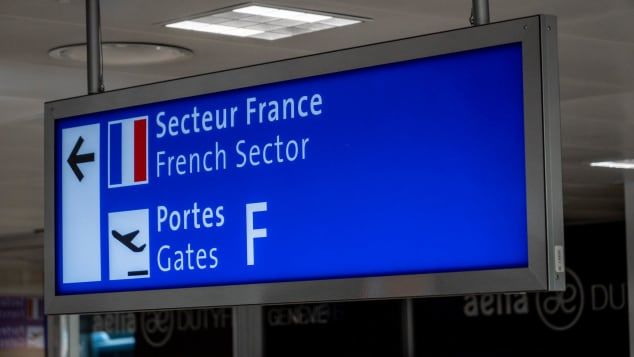 Geneva Aiport is on Swiss soil but also has a French sector.

Geneva Airport, also known informally by its old name Cointrin, is entirely on Swiss soil, but only just. The edge of its runway skims the French border. The sharp right-angle turns that the border takes along the airport's perimeter are, in fact, not random.

When in the 1950s Swiss authorities wanted to extend the airport's runway the only feasible option was to do so over French territory.

The matter was sorted by the signing of an international treaty by which France and Switzerland exchanged plots of territory of equivalent size. The Swiss could extend the runway and, in exchange, granted France the use of a section of the airport.

The so-called "French sector," which is linked to the French "mainland" through a dedicated road, allows French travelers to board flights to Paris and a handful of other French destinations without having to go through Swiss customs.

Although the entirety of the facility remains Swiss sovereign territory, businesses in the French sector trade in euros and apply French sales tax.

Since Switzerland is part of the Schengen area, but not of the EU customs union, French customs operate at the terminal as well.

A joint committee with high-level representatives from both sides of the border meets at least once per year to deal with any matters pertaining to these international arrangements.

"The French sector at the moment is limited to four boarding gates, which can be a bit of a constraint sometimes.

"Switzerland's entry into Schengen has opened up new possibilities; for example, we are studying the possibility of moving from a physical conception of the French sector to one based on the operational needs of the airport at each given time," Gael Poget, director of international and governmental affairs at Geneva Airport, tells CNN Travel. 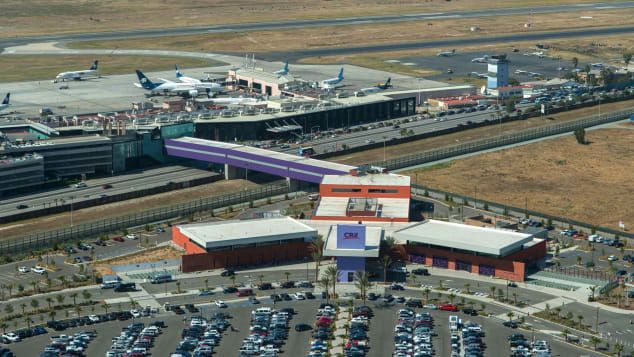 The Cross Border Xpress allows people to cross the US-Mexico border through a pedestrian overpass.

The wall running along large sections of the US-Mexico border has received media coverage aplenty. What is less known, though, is that at one particular point you can walk over it -- provided you have a boarding pass.

Since 2016, the $120 million Cross Border Xpress (CBX) terminal has linked the Otay Mesa district of San Diego, California, to the main terminal at Tijuana International Airport through an elevated pedestrian overpass.

The CBX makes it possible for travelers to check in for their flights on US soil, then walk over the border to the boarding gate in Mexico. Ticket prices start at $16 one-way to cross the bridge, which in 2019 registered nearly 3 million transits. 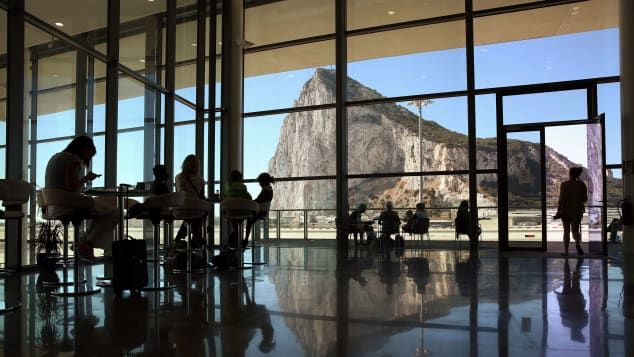 While the previous airports in this list are examples of international cooperation, Gibraltar remains a far more contentious case, given the ongoing sovereignty dispute between the UK and Spain over this British Overseas Territory.

Gibraltar's airport was built right before World War II at the edge of Gibraltar's isthmus, just meters away from the Spanish border and on land that Spain claims was not included in the Treaty of Utrecht, by which the Rock was ceded to Britain.

In 2006, during a temporary thaw in relations centered around the Cordoba Agreement, the UK and Spain agreed that Gibraltar's new airport terminal would be accessible through the Spanish side and there was even some talk about the possibility of a joint venture company to operate some services at the terminal.

None of these initiatives came to fruition though. Only the British part of the terminal was completed (it became operational in 2012), so travelers coming from Spain have to go over the main border crossing adjacent to the terminal to access the airport.

The dispute also affects Gibraltar's airspace, whose inclusion in the proposed European Single Sky initiative remains blocked by Spain. Direct flights between Gibraltar and Spanish airports are possible, though, subject to agreement between the UK and Spain. Spain's flag carrier, Iberia, operated a route from Gibraltar to Madrid for a couple of years, but it was discontinued in 2008.

"The current situation vis-à-vis Brexit and the United Kingdom's exit from the European Union now may effectively make the Cordoba Agreement null and void as other options are being explored between Gibraltar, the UK, Spain and the EU, but these negotiations are currently at a very early stage," a source at the airport tells CNN Travel.

US airports on the Canadian border

The northern border of the United States is also straddled by several airport facilities.

When, in 1846, the US and Britain finally settled on the 49th parallel for the border between the US and Canada, they could not possibly anticipate the future needs of the yet-to-be-born aviation industry.

The world's longest stretch of border running uninterrupted in a straight line cuts through the grounds of six different airfields as it makes its way from the Great Lakes to the Pacific.

To be fair, the "airport" label is a bit of a reach here, since most of those airfields are little more than an unpaved runway in the middle of the prairies. Yet, they are still ports of entry that are subject to the formalities of cross-border travel.

Let's see where they are, from west to east.

Having only four permanent residents (according to 2020 US Census data) has not prevented the small outpost of Laurier, Washington, from boasting its very own "international" airport.

The fact that the tip of its gravel runway extends 500 feet into Canadian territory pretty much ensures that a good portion of the 800 movements registered at Avey Field is an international flight.

Both US and Canada customs facilities are located adjacent to the runway.

This is one of a string of airports whose unpaved runways sit, literally, on the border line.

Owned and operated by the state of Montana, Del Bonita/Whetstone International Airport is also accessible from the Canadian side as well.

There is a customs point at the western edge of the airfield.

Here's another runway running exactly along the border line. The Coronach/Scobey Border Station airfield must not be mistaken with the nearby Scobey 9S2 airport, which is a few miles further south and boasts a paved runway.

This airport is classified as an official port of entry by Canada, although the grand total of 10 operations it handled in the whole of 2019 surely doesn't give much work to the staff at the adjacent border post.

Aircraft can access the non-paved runway at the Coutts/Ross airfield from both the US and Canada sides, since the border bisects it right through the middle.

Traffic here is also minimal, with less than a dozen movements per year (as per 2019 data). 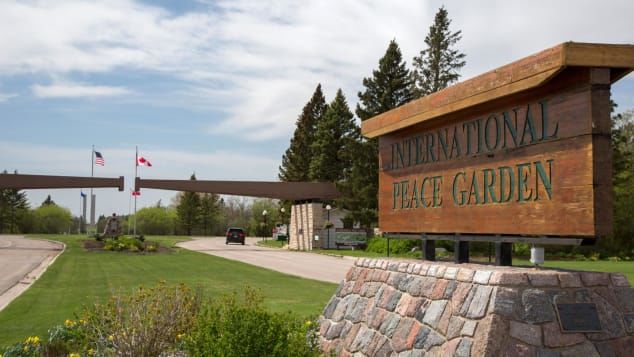 Aptly named after a nearby park which was established in 1932 to celebrate the friendship between Canada and the US, most of International Peace Garden

Airport, including the runway and main facilities, is on US soil.

However, part of the apron stretches onto the Canadian side of the border, making it possible for aircraft to also operate to and from Canada. 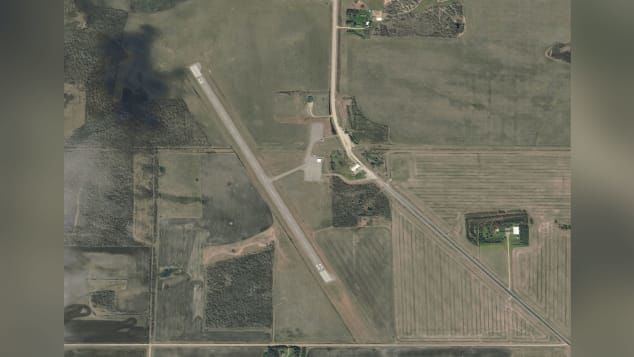 Piney-Pinecreek's double-barrelled name alludes to the airport's joint use by the towns of Pinecreek, Minnesota, and Piney, Manitoba.

Unlike its neighboring airports, this one has a paved runway which used to stop just short of the border. It was the need in the 1970s to extend the runway to accommodate larger craft that led the airport to creep northwards (the southern perimeter was already delimited by an existing road), becoming, in the process, a binational airport.