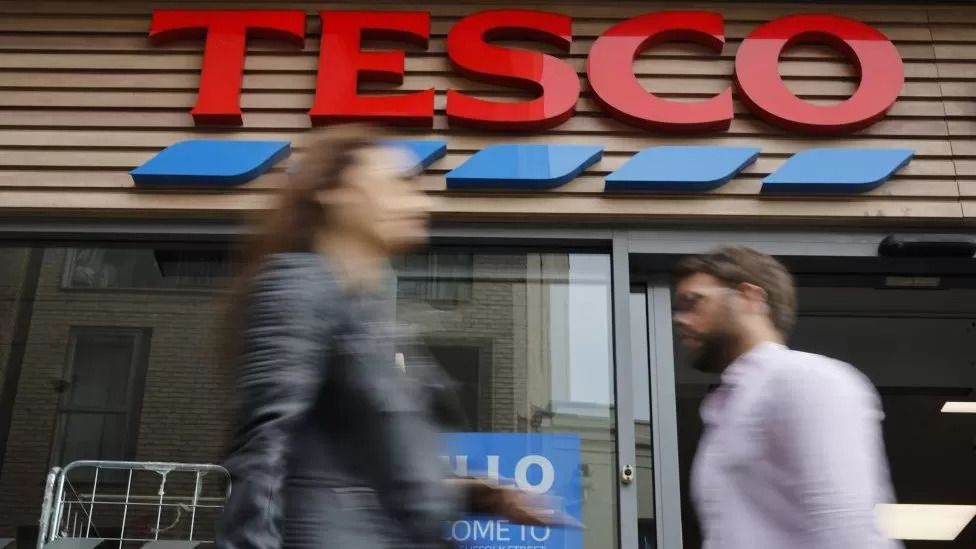 The UK's largest supermarket chain said customers are looking for ways to make their money go further, including switching from branded products and cutting back on eating out.

It came as Tesco reported a fall in profits and warned full-year earnings would be at the lower end of guidance.

It also announced a further boost to pay for UK workers.

The cost of living is increasing at its fastest rate in nearly 40 years, driven by the rising cost of food and energy.

It is eating into household budgets, with prices rising faster than wages.

Tesco said consumers were already spending less as shopping habits normalised after the pandemic, but they are cutting back even more now because of inflation.

The supermarket giant said operating profits in its retail division fell by 10% in the six months to the end of August. However, sales across the whole group excluding its fuel business increased by more than 3% .

The retailer now expects annual underlying retail earnings of between £2.4bn and £2.5bn, which is at the lower end of previous guidance.

Tesco boss Ken Murphy said customers were trying to "make their money go further, whether they are switching from branded products, between categories or cutting back on eating out".

"As we look to the second half [of the year], cost inflation remains significant, and it is too early to predict how customers will adapt to ongoing changes in the market," he added.

"We know our customers are facing a tough time and watching every penny to make ends meet."

Tesco faces mounting competition from discounters such as Aldi, which became the fourth-largest UK supermarket for the first time in September as shoppers looked to make savings.

In its update, Tesco said it would lock in the prices of more than 1,000 everyday products until next year to help consumers cope with rising costs.

It also announced that its shop staff in the UK are set to receive another pay rise, their second this year.

Rival chains Morrisons, Sainsbury's and Asda have also hiked pay for their store workers this year, as UK supermarkets battle for staff amidst increasing competition in the sector.

Matt Britzman, equity analyst at Hargreaves Lansdown, said Tesco was under pressure from competitors as shoppers felt the pinch.

"Supermarkets are no strangers to dealing with cost-of-living pressures, there's been an all-out price war in the industry for some years now," he said.

"Amongst the larger players, Tesco's arguably been one of the standout businesses in the battle against low-cost outfits [such as Aldi and Lidl] but pressures on consumer spending can only build for so long before something must give."