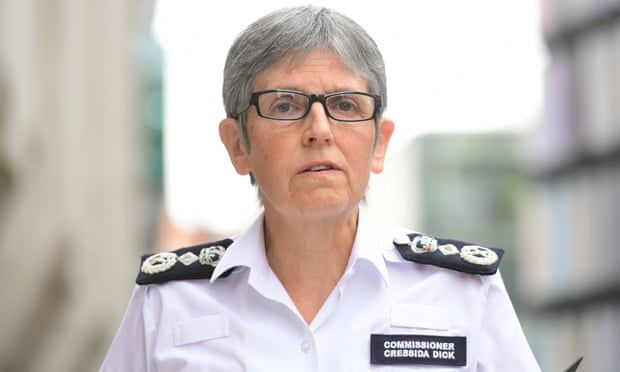 Cressida Dick calls for more action to stop online radicalisation and questions push towards end-to-end encryption
The UK most senior police officer has accused technology firms of failing to identify, monitor and report the activity of terrorists, in a plea for improved access to social media platforms.

Her comments follow calls last week by the home secretary, Priti Patel, for social media companies to take the protection of the public as seriously as their profit margins.

Addressing the International Institute for Counter-Terrorism’s 20th annual summit in Israel, Dick said tech firms were not doing enough to stop the radicalisation of vulnerable people.

“The tech companies and social media platforms have become much better at working alongside law enforcement and governments to help protect people against a huge range of online threats, and I pay tribute to them for that.

“But there is still more they can and must do. They have the power and resources to make a real difference … They are not doing enough to protect people against the harm that takes place on their platforms.”

Dick cited the use of end-to-end encryption to keep messages secret as an example of law enforcement being hampered.

End-to-end encryption is a privacy feature that makes it impossible for anyone except the sender and recipient to read messages sent online.

“Police colleagues here in the UK have spoken at length about end-to-end encryption becoming ubiquitous across the world’s most popular social media platforms.

“This is just one example of how this wonderful capability that we all have now to communicate in different ways is also not only damaging to society but preventing law enforcement agencies the world over from protecting their citizens.

“How are we supposed to protect children from online sexual exploitation? Or defend ourselves against the next terrorist threat if we don’t even have the power to have evidence held on servers outside our jurisdiction?”

“How we react to challenges posed by supranational organisations will be pivotal to tackling the terrorist threat, and whether that means new regulations and regulatory bodies, or greater collaboration from those who have the power to change things, we cannot allow the status quo to continue.”

Some groups aimed to radicalise young or vulnerable people online to carry out less complicated attacks using knives or vehicles rather than higher-risk bomb plots, she said.

“In the past, perhaps recruiting children or those with mental ill-health would have been an unacceptable risk when trying to execute a complex bomb plot.

“But when you’re simply trying to push vulnerable people over the edge towards crude, direct action such as a random knife attack, the opposite is true,” she said.

The debate over end-to-end encryption has raged for years, but has intensified in recent months amid plans by media giants, including Facebook, to introduce further measures to ensure privacy.

A Facebook spokesperson said last week: “Child exploitation has no place on our platforms and Facebook will continue to lead the industry in developing new ways to prevent, detect and respond to abuse.

“End-to-end encryption is already the leading security technology used by many services to keep people safe from hackers and criminals. Its full rollout on our messaging services is a long-term project and we are building strong safety measures into our plans.”
#Priti Patel  #Facebook
Add Comment