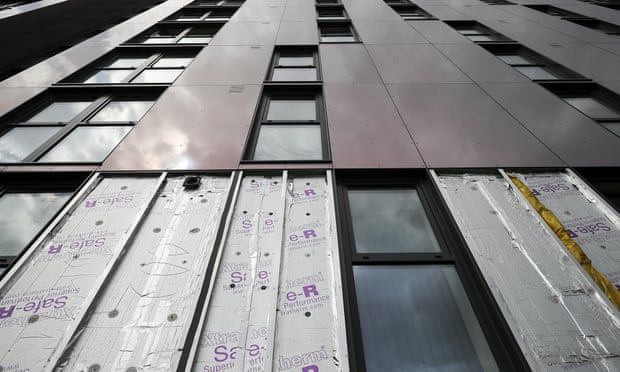 In comments that struck a less bullish tone about his previously stated ambition to make the construction industry and developers pay, he conceded that the “government has to share some of that responsibility as well” and that the “taxpayer is the backstop”.

Gove had said he wanted freeholders, developers and product manufacturers to pay £4bn to help fix combustible cladding on all tower blocks above 11m, after the government already committed £5.1bn.

But the secretary of state for levelling up, housing and communities told a Commons select committee: “The chancellor will probably shiver to hear me say it, but we have a responsibility here. But what we want to do is to make sure that with the taxpayer having already committed a significant amount, those who do have a direct stake in ownership do so.”

He was speaking after last week’s promise to effectively ban developers and product manufacturers that do not help fix the cladding scandal from trading. He promised to limit leaseholders bills for non-cladding costs to no more than £15,000 in London and £10,000 elsewhere.

But the Home Builders Federation industry group have told him they believe they are only responsible for a small fraction of the £4bn he is seeking and have complained they are being targeted “because, as UK-headquartered businesses, it is a simpler proposition than pursuing overseas developers, influential property sector interests and foreign product manufacturers”.

Gove said to the MPs: “Some of the most egregious transgressors are companies based outside the UK so there are practical difficulties in pursuing them in the way that we would want to. Some of the things we have been trying to do with Kingspan, Arconic and these other companies is trying to demonstrate to them that they can’t evade these responsibilities.”

Gove was also unable to promise than public funds to build new social housing would not be raided. His appearance came as the public inquiry into the Grenfell Tower disaster begins to examine the role of the government and affiliated organisations in setting rules that allowed combustible materials to be used.

On Monday the inquiry heard from Debbie Smith, managing director of BRE Global, formerly the government’s Building Research Establishment, who said that in 2002 she told the government that after test fails, aluminium composite panels with a polyethylene core (used on Grenfell and at least 481 other high-rise residential buildings in England) should never be used on a tall building.

Speaking just hours later Gove said: “It was clear that there was a collective failure to ensure that appropriate safety rules were followed and that information was shared in an appropriate way … Government has to share some of that responsibility.”

Gove also said he will look at soaring insurance premiums, an issue raised by the broadcaster and journalist Jeremy Clarkson, who owns an affected flat, in his column in this weekend’s Sunday Times.
Add Comment