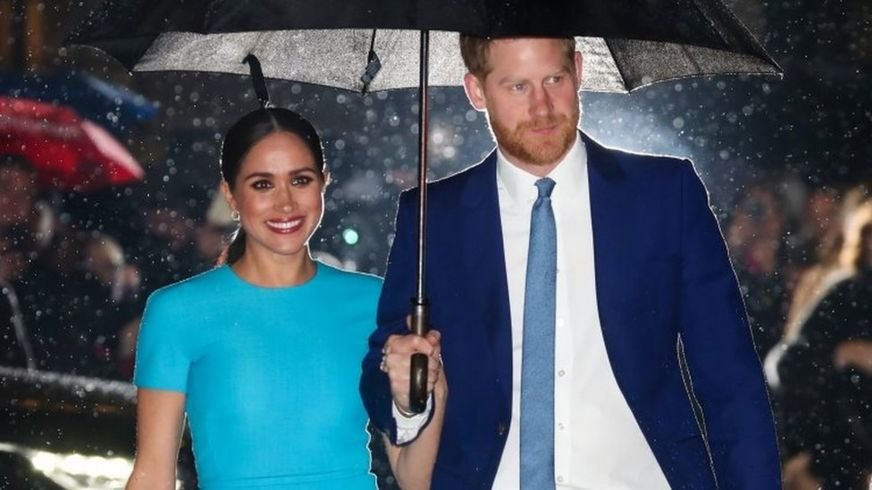 Harry and Meghan 'did not contribute' to new book Finding Freedom

The Duke and Duchess of Sussex have denied contributing to a new book about their life in the Royal Family.
The book, Finding Freedom - which is being serialised in the Times - has claimed the Sussexes and Cambridges were barely speaking by March.

It also says friends of Prince Harry and Meghan referred to some Palace officials as "vipers".

A spokesman for the Sussexes, who now live in California, said they had not been interviewed for the book.

A statement said: "The Duke and Duchess of Sussex were not interviewed and did not contribute to Finding Freedom.

"This book is based on the authors' own experiences as members of the royal press corps and their own independent reporting."

The book's authors, Omid Scobie and Carolyn Durand, describe a culture of increasing tension between the Sussexes and other members of the Royal Family.

They say the Sussexes felt their complaints were not taken seriously and believed other royal households were leaking stories about them to the press.

"There were just a handful of people working at the palace they could trust," the authors write.

"A friend of the couple's referred to the old guard as 'the vipers'.

"Meanwhile, a frustrated palace staffer described the Sussexes' team as 'the squeaky third wheel' of the palace."

The duke and duchess are now based in Los Angeles, California, having stepped back as senior royals earlier this year.

For their last public appearance as working members of the Royal Family, they joined the Queen and other senior royals at the Commonwealth Day service at Westminster Abbey on 9 March.

They have since begun their new life of personal independence in the US, pursuing charity projects.

Earlier this month, Meghan delivered a speech to a gender equality summit, while the duke and duchess also spoke to young people about equal rights during the Queen's Commonwealth Trust weekly video call.

Meanwhile, the Sussexes have launched legal action in the US after drones were allegedly used to take pictures of their infant son Archie.

The move marked the latest example of the Sussexes actions against what they have previously described as "invasive" tabloid media.

Meghan is also suing the publisher of the Mail on Sunday and Mail Online for breach of privacy and copyright infringement. The publisher denies her claims.
Add Comment