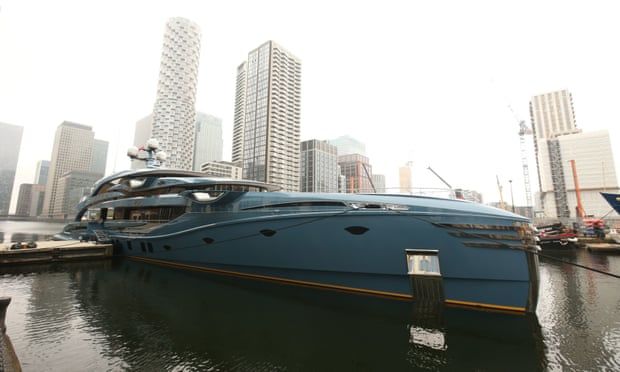 The vessel, known as Phi, is subject to the first detention of a superyacht in UK waters, the National Crime Agency (NCA) said, and its owner was “deliberately well hidden”. The company to which the ship is registered is based in the islands of Saint Kitts and Nevis and it carried Maltese flags to hide its origins, the NCA said.

The law does not require proof or suspicion the owner is closely tied to the Putin regime, merely they are a Russian national, sources told the Guardian, and the owner is understood not to be an individual facing sanctions.

Guy Booth, a New Zealander based in Brighton, is captain of Phi and has posted several pictures of the vessel on his Instagram feed.

Booth, an experienced superyacht seaman, was appointed as “owner’s representative” and “build captain” to oversee the construction of the yacht in 2019, according to his LinkedIn profile. Booth did not respond to requests for comment on the identity of the owner.

Booth has previously said the owner proposed “thousands of crazy ideas” for what he wanted from the yacht , including a “penthouse” apartment on the upper deck.

“From the early days, it was fairly clear that this owner’s vision would take a unique combination of some extraordinary skills,” Booth said in 2020. “The owner knew that he wanted a deep, intelligent and thought-provoking core concept, that reflects elements of several great personal interests.”

In November, Booth posted a photo of the yacht with the caption “MY Phi just started the first day of trials” when the boat completed its first openwater tests in the North Sea.

The yacht was designed by the Dutch superyacht designer Cor D Rover, which has previously said: “Rather than just building a large yacht on a so-called shipyard ‘platform’ to enjoy the pleasures of being at sea, the owner of Phi wanted to build a yacht with a profound underlying story, a deep-rooted knowledge that runs through all aspects of the yacht, from her exterior appearance all the way to internal experience.”

The yacht was in London for a World Superyacht Awards judging panel event that took place on Monday at the five-star Bulgari Hotel in Knightsbridge. It had been planning to depart at noon on Tuesday.

Officers from the NCA’s “combating kleptocracy cell” served the detention notice after identifying the owner with support from the Border Force maritime intelligence bureau and passing the information to the transport secretary, Grant Shapps. 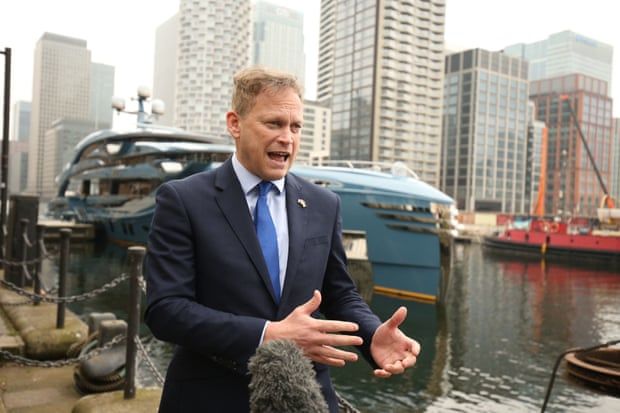 Grant Shapps standing in front of the superyacht in Canary Wharf.

At 58.5 metres long, Phi is the third biggest yacht built by the prestigious shipbuilders Royal Huisman and includes what the builders call an “infinite wine cellar” and patented fresh-water swimming pool.

Shapps, said impounding the vessel had “turned an icon of Russia’s power and wealth into a clear and stark warning to Putin and his cronies … Detaining the Phi, proves, yet again, that we can and will take the strongest possible action against those seeking to benefit from Russian connections,” he said.

Phi – named after the 21st letter of the Greek alphabet, used to symbolise the golden ratio – made its maiden voyage last year after being built in the Netherlands.

Shapps said: “Now the ship is being held, it won’t be going anywhere … it’s just another indication that we will not stand by whilst Putin’s cronies are allowed to sail around the world in these kinds of yachts and people in Ukraine are suffering. When you see what he’s doing to Ukraine, when you see what he’s doing to people’s lives, it can’t be right to have a yacht like this here in London, able to just sail away and that is why we’ve impounded it, and denied it the ability to go anywhere right now, and it’s another indication of how seriously we take these matters.”

The prime minister’s official spokesperson said: “For the first time ever in UK waters we have detained a Russian super-yacht, the £38m Phi. The Department for Transport (DfT) has worked closely with the National Crime Agency and Border Force maritime investigation bureau to intercept this superyacht. We will continue to take robust action against anyone benefiting from Russian links.”

The Department for Transport said it was looking at a number of other vessels and hoped its “strong stance sends an example to international partners”.

Up to 12 guests are accommodated onboard Phi, and it also has accommodation for 11 crew, including the captain, according to Super Yacht Times. The vessel was last sold in 2018.