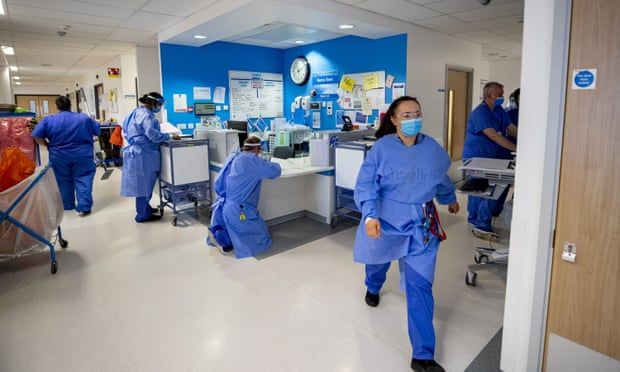 Burnout from two years of battling Covid pandemic has created flood of departures and public concern, says survey
A record number of more than 400 workers in England have left the NHS every week to restore their work-life balance over the last year, according to a new analysis of the workforce crisis hitting the health service.

The flood of departures comes with staff complaining of burnout and cases of post-traumatic stress disorder following two years of battling the Covid pandemic. There are now concerns that the exodus is impacting the quality of care, with more than a quarter of adults saying they or an immediate family member had received poor care as a result of the workforce problems.

The findings emerged in an assessment of the health service compiled by John Hall, a former strategy director at the Department of Health and Social Care, for the Engage Britain charity. Concerns over the state of the workforce came top of its list as it investigated the public’s attitude towards health and social care services, which remain under pressure in the wake of the pandemic.

“The workforce crisis in the NHS has clearly penetrated the public consciousness,” Hall writes. “The UK has long had significantly lower numbers of doctors and nurses per capita than comparable systems … More recently, the impact of working conditions is showing an increasing impact on the ability of the NHS to retain staff. Around 50 in every 10,000 staff working in hospital and community health services in June 2021 left the service within the next three months, citing work-life balance as the reason. This was a new record.”

Analysis of NHS Digital figures found that at least 400 staff a week in England are leaving to improve their work-life balance. It comes alongside evidence of high turnover among social care workers. Recent estimates show more than a third (34%) of care workers left their roles in 2020-21.

Earlier this month, former health secretary Jeremy Hunt told the government it had “missed an opportunity” to alleviate the workforce crisis in the NHS and social care, after rejecting the Commons health select committee’s recommendation to overhaul workforce planning. Staff shortages were the main driver of worker burnout, he said

Engage Britain gathered a panel of people from across the country to identify attitudes and concerns towards health and social care services. Patient treatment, support for mental health issues and preventative healthcare were among the main issues identified.

Care work and nursing were named as some of our most undervalued professions, with 69% saying more NHS staff are needed.

One senior occupational therapist, speaking anonymously to the project, said she decided to pay for an expensive operation after injuring her knee because she had seen how overwhelmed the NHS had become. “Waiting for eight weeks might become 12 weeks, or more. Living on my own, I didn’t have anyone to help me, and relying on friends just didn’t feel right. It wasn’t a difficult decision to go private. I just felt lucky I was in the position where I could choose when others can’t.

“I think people generally feel overworked and undervalued in the NHS. There are problems with recruitment and retention of staff. Some vacancies are unfilled for more than a year. The stress levels on staff in under-resourced teams is massive and it’s a major contributor to them struggling with their mental health and wellbeing. Ultimately, people make the decision to leave, or to take early retirement, or seek other careers.”

Jenny Bevan, 74, from Bath, said she was left fearful of returning to hospital after she sought treatment for a hiatus hernia in 2018. She said she felt staff shortages and other stresses on the NHS had played a major role. “The surgery went well, but afterwards I was left in the recovery room for hours. There appeared to be only one nurse and, as the day wore on, the number of patients grew and grew.

“I was anxious because my granddaughter had all my personal belongings and didn’t know where I was. But the nurse wouldn’t let her in to see me. She seemed stressed and clearly needed more help.

“When I had to go to the toilet, I was not allowed to get out of bed so I had to use a bedpan which spilled over and it was just awful. I was eventually transferred to a ward for dementia patients. I was in considerable pain but was told I’d have to wait for the doctor as the nurse wasn’t qualified to give strong painkillers.”

Julian McCrae, Engage Britain’s director, said frontline health and care workers were now “running on empty” and a plan for boosting the workforce was overdue. “NHS workers across the country have spoken to us about feeling overstretched, undervalued and struggling to get support in a chaotic system,” he said. “We can’t allow staff to burn out, while putting patients at risk of mistakes or spiralling downwards as they wait months for treatment. The government must act quickly to expand its promise of reform, based on listening to the people who use or work in the system every day. Only answers rooted in real experiences can deliver health and care that works for us all.”
#Covid
Add Comment