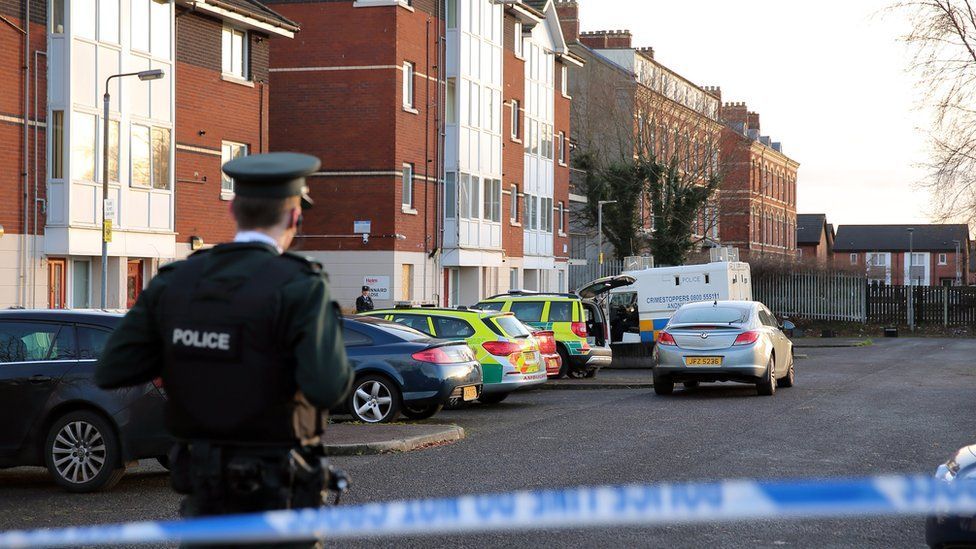 A 38-year-old man has been told he will spend a minimum of 11 years in prison for the "brutal" manslaughter of two people in north Belfast.

McBrine stabbed Ms Murray in the throat with a broken vodka bottle.

This was hours after punching her in the face and telling her: "I'm going to do you in."

At the time of the alcohol-induced double manslaughter, all three people resided in separate flats in an apartment complex at Kinnaird Close in the Antrim Road area of north Belfast.

The trio had been drinking on 22 December and 23 December.

The last time Ms Murray was seen alive was when she was captured on an internal CCTV system entering her flat at 10:45 on the morning of 23 December.

McBrine was seen exiting her flat wearing blood-stained clothing at 12:12 and the alarm was raised half an hour later when a neighbour discovered the lifeless bodies of Ms Murray and Mr Dutton in her flat.

McBrine, who appeared for the sentence hearing at Belfast Crown Court via videolink, was handed two life sentences.

He was initially charged with murder, but pleas to manslaughter on the grounds of diminished responsibility were accepted.

Mr Justice O'Hara imposed concurrent life sentences on McBrine and told him that he will serve a minimum of 11 years in prison before he is considered eligible for release.

The judge said alcohol had "blighted the lives" of both the victims and McBrine.

Reading family statements, he noted that Ms Murray's father said "the fact that she succumbed to addiction is not what defines her, instead, she will be remembered as a caring and loving daughter, sister, cousin and niece".

Mr Dutton's family had also expressed "similar feelings about losing him, especially in such a brutal way".

In a statement on Wednesday, the Police Service of Northern Ireland (PSNI) said the incident in north Belfast had been a "very brutal and sustained attack in which two innocent victims were stabbed multiple times".

"My thoughts today are with those families, and I know that the sentence imposed will never ease their pain and sorrow."