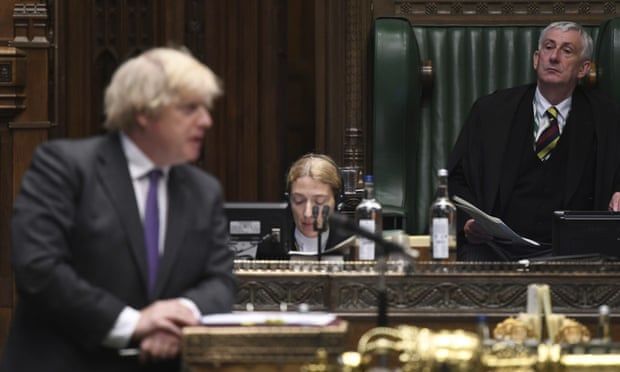 Hoyle invited the prime minister to his office on Tuesday afternoon for a half-an-hour sit down after launching into a furious attack on Johnson the day before, claiming he had been “misled” about the timing of Monday’s announcement.

It means Johnson is likely to escape a public rebuke from Hoyle before prime minister’s questions on Wednesday, a further reprieve for the prime minister given the vast majority of Tory MPs are expected to support pushing the final stage of the roadmap from 21 June to 19 July.

A formal vote has to be held to extend the regulations due to expire on 30 June. The motion is expected to pass despite a vocal minority of Conservative backbenchers voicing their opposition in advance. Labour has agreed to reluctantly back the delay though claiming Johnson is to blame for allowing the Delta variant to spread faster by not putting India on the red list earlier.

Johnson faced fury for the handling of his announcement at the start of this week, making it in a press conference at 6pm instead of parliament. Some Tories were incandescent, given the ministerial code, which the prime minister signed and wrote a foreword to, makes clear: “The most important announcements of government policy should be made, in the first instance, in parliament.”

Hoyle complained on Monday that ministers were “once again … running roughshod over MPs”. Other Conservative backbenchers voiced their anger, with Sir Edward Leigh saying he was “astonished” at the government’s behaviour, and Peter Bone suggesting ministers were “probably in contempt of parliament”.

In a bid to calm tensions, Hoyle requested a meeting with Johnson, said to have been “cordial”. A spokesperson for the Speaker said: “It was a positive meeting in which they agreed the importance of keeping parliament and the public informed when decisions are taken. They agreed that announcements would be made at the same time.”

Tory sources predicted a rebellion of about 30 MPs – including some who could just abstain – but said there was a widespread distrust of Johnson’s pledge that 19 July would be the end of all restrictions.

One former minister said he would back the government “very reluctantly” and insisted his support would only be assured for one last push.

One MP who intends to vote against the government said there were significant reasons to doubt that all restrictions would be lifted by 19 July. “There are still curbs on normal life that are set to continue – test and trace still forces you to isolate even if you’ve had two vaccinations, mask-wearing looks like it will be the norm for the foreseeable,” the MP said.

Mark Harper, who chairs the Covid Recovery Group, echoed similar concerns. “Some of us, I’m afraid, are a bit worried that we’re not going to actually move forward on the 19 July,” he said. “Ultimately we’ve reduced the risk of this disease hugely by our fantastic vaccination programme, and, as the government says, we’ve got to learn to live with it, but the problem is every time we get to that point, ministers seem to not actually want to live with it and keep restrictions in place.”
#Covid  #Boris Johnson
Add Comment