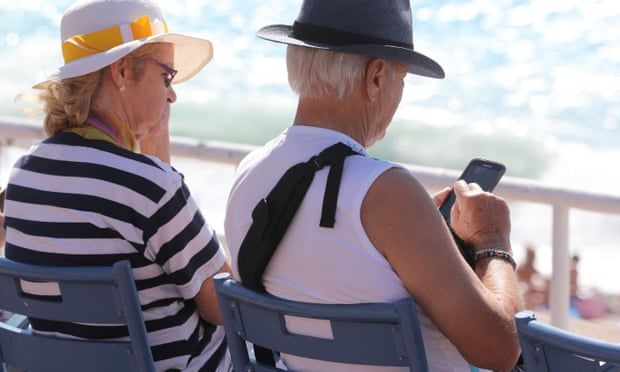 Smartphone is now ‘the place where we live’, anthropologists say

A UCL study has found people around the world feel the same about their devices as they do about their homes
Smartphone users have become “human snails carrying our homes in our pockets”, with a tendency to ignore friends and family in favour of their device, according to a landmark study.

A team of anthropologists from UCL spent more than a year documenting smartphone use in nine countries around the world, from Ireland to Cameroon, and found that far from being trivial toys, people felt the same way about their devices as they did about their homes.

“The smartphone is no longer just a device that we use, it’s become the place where we live,” said Prof Daniel Miller, who led the study. “The flip side of that for human relationships is that at any point, whether over a meal, a meeting or other shared activity, a person we’re with can just disappear, having ‘gone home’ to their smartphone.”

This phenomenon was leading to the “death of proximity” when it comes to face-to-face interaction, he said.

“This behaviour, and the frustration, disappointment or even offence it can cause, is what we’re calling the ‘death of proximity’. We are learning to live with the jeopardy that even when we are physically together, we can be socially, emotionally or professionally alone.”

If there’s one specific cause for that transformation, the researchers suggest it may be chat apps such as WhatsApp, which they call the “heart of the smartphone”. “For many users across most regions, a single app now represents the most important thing that the smartphone does for them” – LINE in Japan, for instance, WeChat in China, and WhatsApp in Brazil.

“These apps are the platforms where siblings come together to take care of elderly parents, proud parents send out endless photographs of their babies, and migrants reconnect with families; they are the means by which you can still be a grandparent even if living in another country.”

Unlike many explorations of smartphone use, the study specifically focused on older adults, “those who consider themselves neither young nor elderly”.

“At first an emphasis upon older people may appear strange because we have become so used to concentrating upon youth, once thought the natural users of smartphones,” the researchers wrote, “however, a focus upon older people has helped to extract the study of smartphones from any specific demographic niche so that they may be considered as the possession of humanity as a whole.”

Even with that distinct focus, the researchers find that around the world smartphones are basic necessities. “The smartphone is perhaps the first object to challenge the house itself (and possibly also the workplace) in terms of the amount of time we dwell in it while awake,” they conclude, coining the term “transportal home” to describe the effect. “We are always ‘at home’ in our smartphone. We have become human snails carrying our home in our pockets.”

The researchers also describe how this “home” can be far from being a place of respite, with work communications and social media both having the potential to encroach.

They observe: “In other ways, the smartphone may reduce the prior experience of home as a refuge. Employees may now be expected to remain in contact with their work, for instance, even after leaving the workplace. A child bullied by other pupils at school now finds little or no respite through coming back to her or his home.”

But Miller cautioned against an overly negative view. “The smartphone is helping us create and recreate a vast range of helpful behaviours, from re-establishing extended families to creating new spaces for healthcare and political debate,” he said. It is only by looking at the vastly different uses and contexts that we can fully understand the consequences of smartphones for people’s lives around the world.”
Add Comment