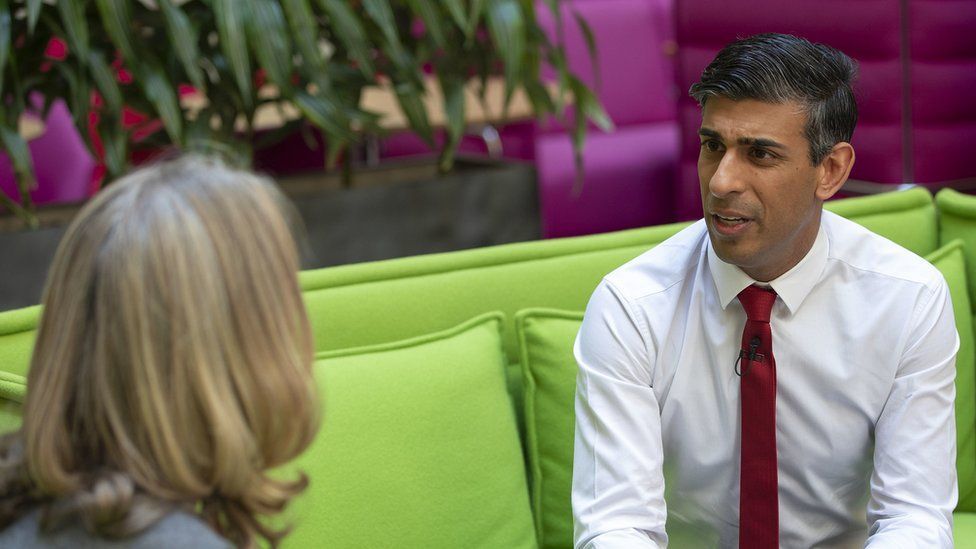 Chancellor Rishi Sunak has said it would be "silly" to provide more support to tackle rising energy bills now, before knowing what will happen to prices in the autumn.

Households faced a 54% hike in energy costs this month, along with record-high inflation hitting their pockets.

Opposition parties have called for an emergency budget from the government to focus on the cost-of-living crisis.

But Mr Sunak said he wanted to see what happened with energy prices first.

He pledged the government would look again at more support in the autumn, when the price cap - which rose by 54% in April - is expected to go up again.

Labour's shadow economic secretary to the Treasury, Tulip Siddiq, said the remark showed how "out of touch" the chancellor was, as people were "already feeling the cost of living crisis".

The cap is the maximum price suppliers in England, Wales and Scotland can charge households for energy, and it is reviewed every six months.

Energy prices have been rising worldwide, driven by squeeze on natural gas supplies made worse by the war in Ukraine.

The chancellor made the remarks during a Q&A session with online forum Mumsnet.

During the 25-minute interview, he was asked by one disabled user - who relies on life-saving equipment at home - whether the government would offer more support to cover energy bills.

Mr Sunak listed policies the government had already announced for households, including the £150 council tax rebate to go towards bills, and said it amounted to £9bn.

He said: "Now I know people are anxious about this and wondering if they are going to go up even more, and I have always been clear from the beginning we will see what happens.

"And depending on what happens to bills then, of course, if we need to act and provide support for people, we will.

"But it would be silly to do that now or last month or the month before when we don't know exactly what the situation in the autumn will be," the chancellor added.

"So I'd say we'll see where we are with that if we need to do more."

But Labour's Ms Siddiq said it was "time to act", adding: "Families are already feeling the cost of living crisis, hit by record rises in energy prices, record high petrol prices and staggeringly steep hikes in the cost of food and essentials.

"With the chancellor heaping them with the biggest tax burden in 70 years on top of that, people are paying more and getting less."

Mr Sunak's remarks come a day after ministers gathered to pitch ideas on how to tackle the cost of living without spending any additional taxpayers' money.

During the cabinet meeting in No 10, Boris Johnson is said to have proposed reducing childcare costs by easing the rules governing how many children one adult can look after.

But Lib Dem leader Sir Ed Davey said the meeting showed the PM was "completely out of ideas during the most profound crisis in decades".

Sir Ed echoed Labour and the SNP's call for an emergency budget, including a cut in VAT, and backed opposition plans for a windfall tax on the profits of the oil and gas companies.

The interview was carried out shortly before Mr Sunak was cleared by the prime minister's independent ethics adviser of breaching the ministerial code over his family's financial interests.

Lord Geidt investigated whether he followed the rules and declared any potential conflicts of interest, after it emerged his wife had held non-dom tax status and he had held a US green card.

The adviser found all the interests above were declared by the Chancellor in 2018 and all - with the exception of his US green card - were re-declared at later dates.