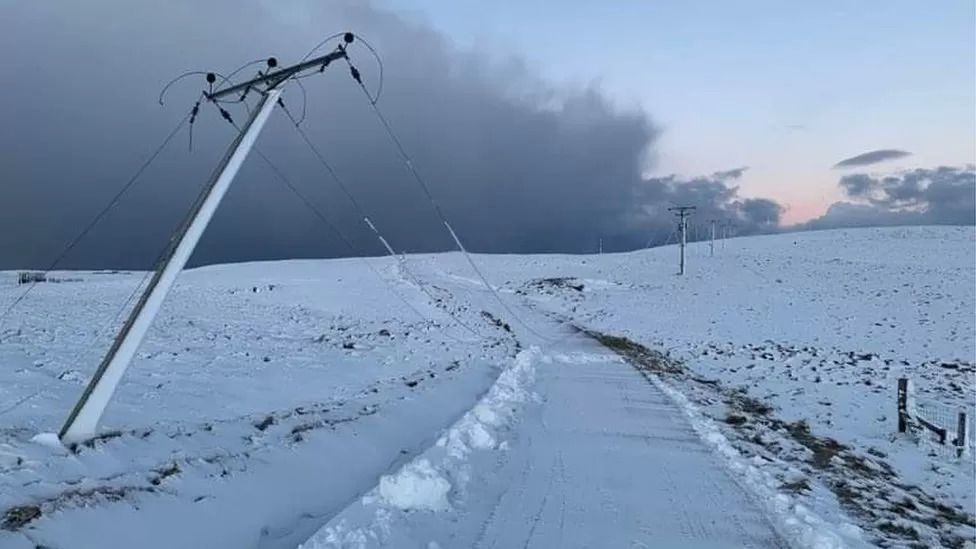 The power cuts in Shetland have been declared a major incident.

SSEN Distribution is working to restore supplies to about 2,800 homes but Keith Brown, lead minister for resilience, said it was clear that many properties would face days without power.

Sumburgh airport has now reopened and is working with transport operators to maximise capacity.

The Met Office has extended a yellow warning for snow and ice for northern Scotland until 12:00 on Friday.

It covers the north and north-east of Scotland, Shetland, Orkney and the Western Isles.

Tuesday night saw a low of -17.3C recorded in Braemar in Aberdeenshire, breaking a record for the year of -15.7C set in the same village on Monday.

Mr Brown urged residents in Shetland to stay at home and check on neighbours, family and friends.

He said he had chaired a Scottish government resilience room with multi-agency partners to make sure every effort was being made to restore power to households.

The power cuts have been caused by "line icing", where snow and ice sticks to overhead power lines, weighing them down and causing them to break.

SSEN Distribution said local teams described conditions as the worst they had seen in 20 years. 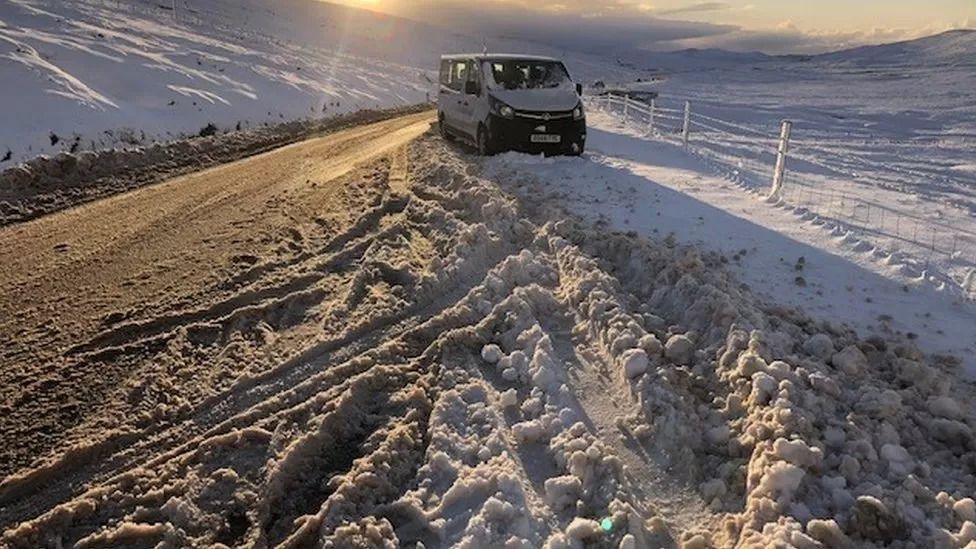 SSEN Distribution is working to restore supplies to about 2,800 homes
The company has mobilised additional support from the mainland, with about 70 staff members of staff travelling to Shetland.

"While all efforts are focused on restoring customer supplies as soon as possible, full restoration remains likely to extend to the end of this week," the firm said.

"It's white everywhere, it's still snowing, the roads are like a couple of inches of snow and ice, it's crazy," she said.

She added that she was quite well prepared with a gas stove, candles and head torches but would not be able to go anywhere.

Meanwhile, the body of a woman has been found in Shetland following a search involving a coastguard helicopter and rescue teams from Hillswick, Lerwick and Sumburgh..

Police Scotland confirmed that the body was recovered near an outbuilding in the Ollaberry area.

It is not yet known if the death is related to the weather conditions. 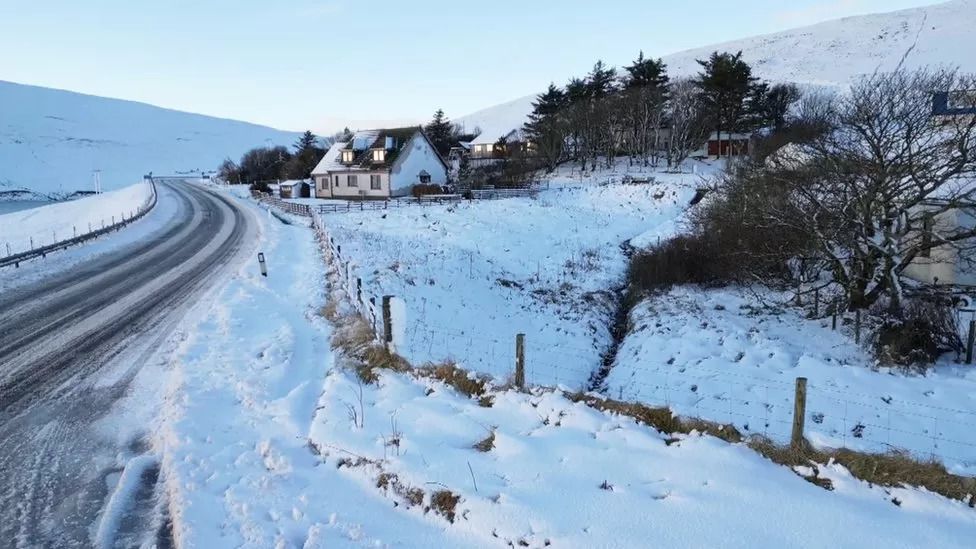 Mr Brown urged residents to stay at home and check on neighbours, family and friends

More SSEN engineers are expected to arrive early on Wednesday morning and will continue supplying Shetland with staff and equipment.

As of 17:30, the firm had restored power to 1,000 properties in Unst, Gutcher and parts of Yell by repairing the main 33 kilovolt network.

About 2,800 customers remain without power in Voe, Whalsay, Brae, Yell and the West Mainland.

Mr Brown said: "Our utmost priority must be to ensure that people, especially the most vulnerable, are safe and warm.

"SSEN have contacted all priority customers and Shetland Islands Council has identified vulnerable people who may need extra support.

"It is also considering how buildings such as community centres could be used to provide respite centres if needed." 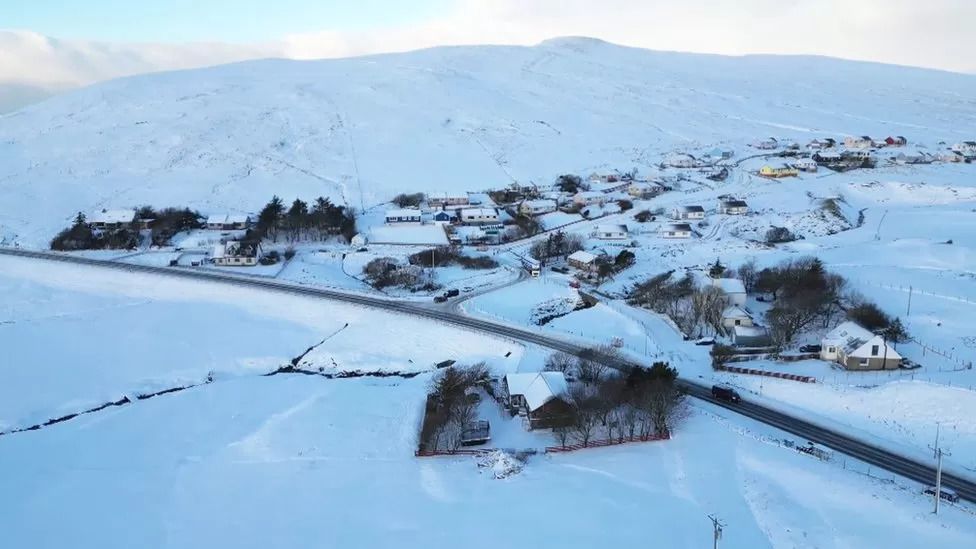 He also urged people to stay at home, find ways to stay warm and check in on neighbours, family and friends, while listening to local radio or following social media for updates.

Mark Macdonald, head of region at SSEN Distribution, said damage to the network was "considerable" and "particularly extensive" across the west of mainland Shetland.

He added: "We'd like to thank NorthLink Ferries and Loganair for their ongoing support in getting our engineers to the islands as quickly as possible.

"I'd like to reassure customers we're working to restore supplies as quickly as possible, liaising closely with our resilience partners to support the joint welfare effort." 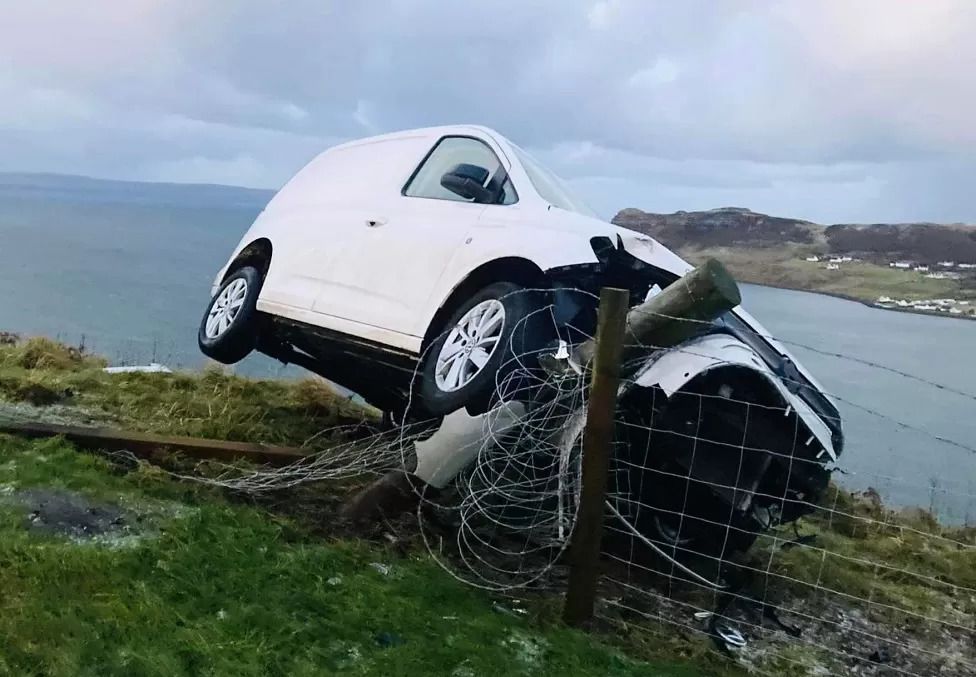 Customers in a vulnerable position should get in touch on the power cut helpline. A further update is expected will be provided mid-morning on Wednesday.

All schools on Shetland will remain closed on Wednesday due to the uncertainty over travel and power.

Heavy snow has also caused chaos on the islands' roads, where about 40 vehicles were stuck on a hill at Weisdale on Monday.

Coastguard rescue teams were called in to help the stranded motorists, and it took seven hours to clear.

Shetland author Ann Cleeves has tweeted that she lost her laptop "in the blizzard" on Monday.

She has offered a reward, saying there is half a novel saved on the computer.

Some schools were shut in Highland, Moray and Dumfries and Galloway on Tuesday due to the effects of the weather.

Police in Dumfries and Galloway warned young people not to play on the ice, after receiving multiple calls from the public.

Snow caused disruption to travel on the A9 near Inverness, and in Skye one driver had a lucky escape after his van came off the road near Uig.

A newly erected fence stopped his vehicle from going down a steep slope.