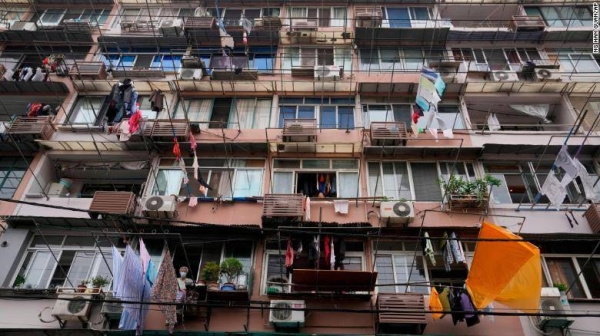 Shanghai neighborhoods return to lockdown a day after restrictions eased

Multiple neighborhoods in Shanghai were placed back under lockdown only a day after city-wide restrictions were lifted, as China's stringent zero-Covid strategy continues to haunt the financial hub.
Shanghai lifted its two-month lockdown on Wednesday, allowing most of its 25 million residents to leave their communities. But nearly 2 million people were still confined to their homes in areas designated as "high risk" by the government.

At a news conference Thursday, Shanghai officials said seven new Covid cases were detected in the city's Jing'an and Pudong districts, resulting in four neighborhoods being swiftly sealed off and designated as "medium-risk areas" -- meaning residents will be confined to their homes for 14 days.

Their 26 close contacts and 106 secondary contacts had been placed in government quarantine, and more than 470,000 people had been tested, according to officials.

The reversion to lockdown is the latest reminder that despite the easing of restrictions, the government's zero-Covid policy -- comprised of mass testing, extensive quarantine and snap lockdowns -- will continue to dominate everyday life.

While Shanghai's businesses and shops were allowed to reopen and subway and buses resumed services, residents still need a negative Covid test taken within 72 hours to use public transport and enter public spaces.

The sense of joy and relief from the lifting of the lockdown among residents soon turned into mounting frustration as long lines formed at testing sites across the city throughout Wednesday and Thursday.

Some stretched for hundreds of meters in the blazing summer heat, and others lasted late into the night, according to videos posted by residents on social media. A testing site put up a notice warning residents the wait could take four and a half hours.

Shanghai officials on Thursday acknowledged and apologized for the long wait, citing a lack of resources and facilities -- despite authorities having built more than 10,000 testing sites and trained thousands of workers to swab throats.

Some of the testing sites had not been put into operation, while others only opened for a short period of time in the day and were understaffed, officials said, vowing to improve the situation.

Many residents are still haunted by fears of a renewed lockdown. On Thursday morning, crowds were filmed fleeing from the International Finance Center mall in the Lujiazui financial district after it suddenly stopped people from entering or exiting — a common practice at venues where positive cases are found, according to videos circulating on social media.

The mall later issued a notice saying it had reopened at 12.30 p.m. after carrying out a full disinfection, without confirming whether there had been a positive Covid case at the site.

Shanghai's poorly managed lockdown led to widespread food shortages and lack of access to medical care, causing an outpouring of anger and frustration among residents. But China's leader Xi Jinping has vowed to carry on with the zero-Covid policy, even as the rest of the world learns to live with the virus and move on from the pandemic.

On Thursday, the People's Daily -- the Chinese Communist Party mouthpiece -- declared on its front page that "the battle to safeguard Shanghai has achieved major phased achievements" under the leadership of Xi.

"Shanghai is actively exploring new mechanisms for normalized prevention and control in the mega-city, and accelerating the return of economic and social development to the normal track," it said.
#Covid
Add Comment