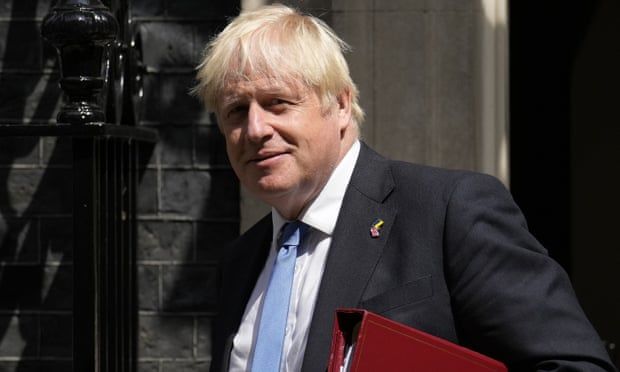 The authors of the petition have said addresses and membership numbers provided by the signatories are undergoing stringent checks and that Conservative campaign headquarters (CCHQ) has not yet received the vast majority of the signatories.

The website Conservative Post, which organised the petition, said it was being overseen by a team of experienced professionals.

The petition is being championed by the Tory donor Peter Cruddas and the former MEP David Campbell Bannerman, who said on Tuesday the campaign had nearly 14,000 signatures.

However, the Guardian understands CCHQ has sampled a few hundred names asking for Johnson’s reinstatement and the majority were not party members. Organisers say CCHQ is yet to receive the bulk of the names and that its sampling would not be representative.

The petition on the Conservative Post website claims it has “racked up more than 10,000 member signatures in just a week” and that signatories are “required to enter proof of membership in order to sign the petition, which is then immediately sent to the Conservative party chairmen Ben Elliot and Rt Hon Andrew Stephenson MP.”

That statement is expected to be revised and the petition will be forwarded in full at a later stage in the leadership contest.

The poll has led supporters of Johnson to claim that one in 10 Conservative members support his reinstatement as prime minister or for his name to be put on the ballot paper – and suggestions of a potential members’ revolt against the two candidates, Rishi Sunak and Liz Truss.

But internally, senior figures said so far the party had received about 300 messages with the text from the petition. Names were checked and fewer than half had come from people with active Conservative party memberships.

The party is likely to receive significantly more names when the final petition is submitted, but while the petition has space to input a Conservative membership number and address, a false or random number can be put in its place.

The petition’s authors say they have systems in place to catch any false information and have been liaising with CCHQ to verify the numbers are correct. Membership number information is held only by CCHQ.

Online, a number of social media accounts have filled in the petition with false information – including under the names of the Russian president, Vladimir Putin, and the foreign minister, Sergei Lavrov. The petition’s organisers said all fake names had been caught and IP addresses for each signatory had been checked.

Lord Cruddas has said the petition represents the will of the membership – in echoes of the way the former Labour leader Jeremy Corbyn won the members’ vote a second time after attempts by MPs to depose him. Many of those signing have written long comments expressing distress at Johnson’s defenestration.

Cruddas has claimed Johnson “does not want to resign” and “wished that he could carry on” as prime minister, comments he has said were made to him by the prime minister over lunch at Chequers on Friday.

“The membership are very upset about what has happened to our elected leader and we demand our say,” he said, announcing the petition.

“This is nonsense and all part of the coup to get rid of Boris. We’ve had hackers and now this. They’re all trying to undermine democracy and now they’re trying to cast doubt on our petition. Thank you to all the members who have signed and continued to sign. The truth will come out and all will be verified.”

A No 10 spokesperson said: “The prime minister has resigned as party leader and set out his intention to stand down as PM when the new leader is in place.”

Campbell-Bannerman said there were more 12,000 people who had filled in forms that would be sent by email to CCHQ. “As with all polls there are some done out of malice or for humour, but that seems a very small proportion,” he said.
#Boris Johnson  #Johnson
Add Comment