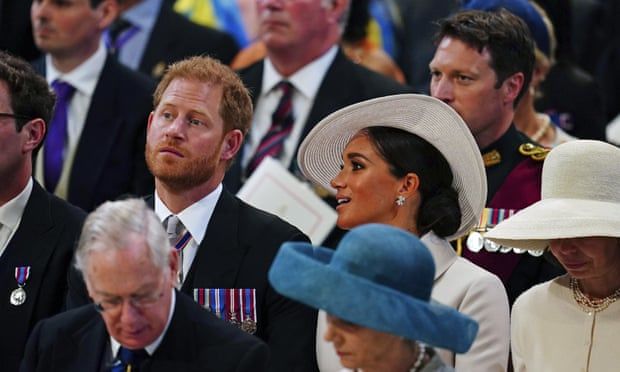 At thanksgiving service, US-based couple were separated from the most senior royals by an aisle

The Duke and Duchess of Sussex’s return to Britain has, so far, been extremely low-key. Invited by the Queen to join the family for the platinum jubilee celebrations, the couple were never going to be on the balcony for the official flypast after trooping the colour. They were, however, invited to watch the ceremony, along with other members of the royal family, from offices overlooking Horse Guards Parade.

But for the endeavours of long-lens photographers who managed to capture through the window grainy shots of the two briefly larking around with the young children of Zara and Mike Tindall, there was little evidence they were even present.

St Paul’s Cathedral was always going to be the event for their first public engagement with other family members since they quit royal duties and the UK. It could have had echoes of the last time Harry and Meghan were seen with William and Kate, when the couples barely acknowledged each other at the Commonwealth Day service in March 2020.

But aides appeared to have averted any such comparison by seating the Sussexes far away from the Cambridges – and, indeed, from the Prince of Wales and Duchess of Cornwall. Their place on the second row, behind the Wessexes and separated from the most senior royals by an aisle, was indicative of their reduced official status as non-working royals, despite Harry’s bloodline.

Neither did the couple attend a reception at the Guildhall after the service of thanksgiving.

Staying at Frogmore Cottage, Windsor, their first marital home, they are a stone’s throw from the Queen at Windsor Castle.

There is speculation that Harry and Meghan could choose to have their daughter Lilibet, who turns one on Saturday, christened while at Windsor.