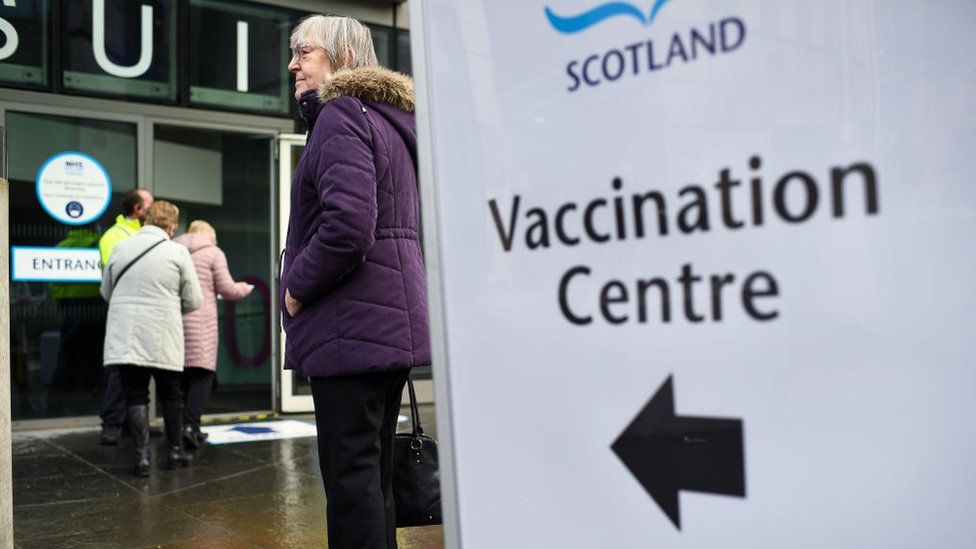 People in Scotland have been asked to limit socialising to three households at a time in the run-up to Christmas amid concerns over the Omicron variant.

First Minister Nicola Sturgeon said the advice would not apply on Christmas Day and that plans should not be cancelled.

But she said people should reduce their social contacts with other households "as far as possible".

Shops and hospitality venues will also be told to bring back physical distancing and screens.

Ms Sturgeon said that Scotland is facing a "likely tsunami" of new infections of Covid-19 in the weeks ahead, with a "very significant" impact on health services.

She said: "Before and immediately after Christmas, please minimise your social mixing with other households as much as you can.

"However, if you do plan on socialising - either at home or in indoor public places - we are asking that you limit the number of households represented in your group to a maximum of three. And make sure you test before you go."

The first minister stressed that she was not asking anyone to cancel their Christmas plans, and that places of worship would remain open.

But she said that people should try to keep their festive celebrations "as small as your family circumstances allow" despite the new guidance not applying on Christmas Eve, Christmas Day or Boxing Day.

The guidelines on social mixing will not be legally enforceable, but Ms Sturgeon warned: "Although it is guidance, please do not think of it as optional."

The first minister outlined a series of measures aimed at reducing virus transmission.

*  physical distancing and the use of protective screens inside hospitality venues

*  a legal requirement for employers to enable staff to work from home where possible.

However, schools are to remain open, with Ms Sturgeon saying it was a "key aim to ensure that schools stay open if at all possible to minimise further disruption to education". 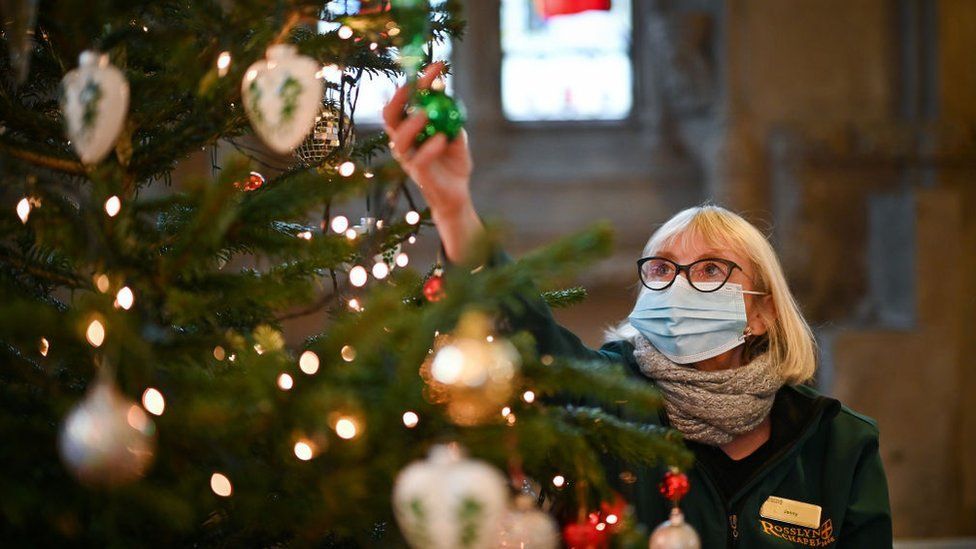 The Scottish government will provide £100m of funding to help businesses in hospitality and food supply chains which have been hit by advice to cancel work Christmas parties.

And ministers are working to identify new mass vaccination centres as part of a push to offer a booster jab to all adults by the end of the month.

Shortly before Ms Sturgeon started speaking, the UK Treasury said it would make extra funding available to devolved governments to accelerate the vaccine rollout and tackle the virus.

An additional 100 military personnel have also been made available to accelerate the vaccine rollout in Scotland, bringing the total number to 221.

The Omicron variant is believed to be spreading very rapidly in Scotland, with the number of cases doubling every two to three days.

The heavily-mutated variant is expected to overtake Delta as the dominant form of the virus this week, with the latest data suggesting it accounts for 27.5% of new cases.

The number of people in hospital has dropped by 20 to 541, but the figure now includes two confirmed Omicron cases.

Ms Sturgeon said that even if the new strain proves milder than Delta, the fact it spreads much faster could still put "significant" pressure on health services.

The Scottish Chambers of Commerce said there would be "disappointment" among firms about the announcement, saying the £100m of funding announced "will not go anywhere near far enough to cover the financial losses being incurred".

And CBI Scotland said the government "must show the same urgency in addressing the economic consequences of Omicron", saying "urgent clarity" was needed on what physical distancing and crowd control requirements would mean in practice.

This package of new rules for businesses and strong guidance to all of us to cut back on social contact is the toughest anywhere in the UK.

Nicola Sturgeon argues that however unwelcome, it is necessary to help slow down the spread of Omicron while booster vaccines are speeded up.

Unlike the political row over Plan B for England, these new measures for Scotland do not face fierce resistance from the Conservatives or other opposition parties at Holyrood.

Instead, they question the detailed arrangements for getting financial support to businesses and accelerating the delivery of Covid jags.

Ms Sturgeon said she would have tightened hospitality rules further with financial support from the Treasury.

It has now promised extra cash which the first minister disputes is new.

While rules on social distancing and other measures for retail and hospitality will be backed up by regulations, the request for reduced social mixing is not.

The first minister said that did not make it optional. But it is not without contradiction.

How, for instance, do you avoid contact with people from many households if you go to nightclubs which remain open for business?

Ms Sturgeon said the new curbs were needed to slow the spread of the virus while the booster vaccine programme is accelerated.

A target of offering appointments to all adults has been set for the end of the month, with the first minister saying the goal was to complete 80% of jabs by then and complete the others early in January.

Booster appointments will be given priority over the remainder of the flu vaccination programme, and the requirement for people to wait in a vaccine centre for 15 minutes before going home will be dropped.

Additional capacity for "drop in" jabs is to be added, while "additional venues" including new mass vaccination clinics are identified.

As well as extra funding to support businesses, the government has added £100m to the self isolation support grant fund, with an expected increase in the number of people asked to quarantine.

The UK government has confirmed that extra funding will be made available to the devolved administrations to deal with the Omicron variant.

Chancellor Rishi Sunak said: "We are working with the governments in Scotland, Wales and Northern Ireland to drive the vaccine rollout to all corners of the United Kingdom and ensure people and businesses all across the country are supported."

His proposal to make Covid passes a requirement of entering large venues such as nightclubs - which is already the case in Scotland - has angered many of his own MPs.

Despite the rebellion, the measures were passed into law as Labour supported them.