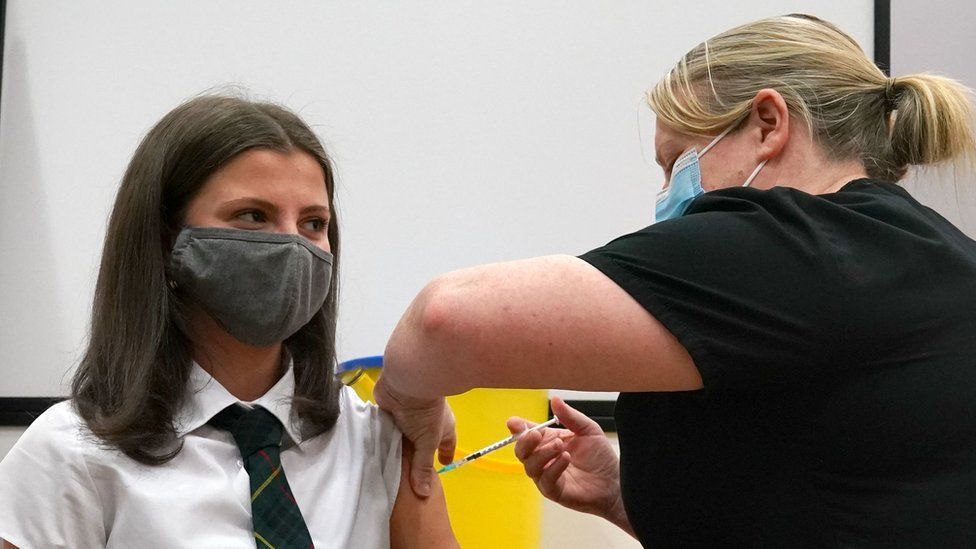 Head teachers have been sent a "consent checklist", under a fake NHS logo, along with a letter telling them to share this with parents.

But the checklist includes a series of negative claims about the risks of vaccinations to young people.

"We would appeal for those behind these fake consent forms to stop circulating them," said Julie McCulloch of the ASCL head teachers' union.

The letters sent to schools are presented as being a consent form with information to be sent to parents ahead of pupils being given Covid vaccinations.

Below an "NHS Vaccines" logo, it includes claims such as the vaccine being a risk for "strokes, blindness, deafness, clotting, miscarriages, anaphylaxis and cardiovascular disorders".

It appears from social media that some parents have already been sent the letter, after schools had been tricked into sharing them.

"Today we have a 'consent checklist' which seems almost kinda like it's designed to put kids off?," said one parent on Twitter - with a follow-up that the school had been in touch again to withdraw the letter.

Dr Jonathan Leach, NHS England medical director for Covid immunisation, told confused parents on Twitter that this was "not a legitimate NHS form".

Heads' leader Ms McCulloch said the hoax letters were causing problems for schools when they were already under pressure.

"One of these pressures is the fact that a large number of pupils have caught Covid and are absent from school - the very thing that the vaccination programme is designed to address," she said.

Covid vaccinations have been offered to 12 to 15-year-olds across the UK this term, with the aim of reducing the spread of the virus and the resulting disruption in schools.

Among those schools sent the hoax letter were those in the St John the Baptist academy trust in East Anglia.

"Our schools are doing an amazing job to continue their primary purpose of education and to keep children and staff safe. And it is shocking that we are being targeted by hoaxers, who are trying to undermine those efforts by pretending they are from the NHS," said Brian Conway, chief executive of the trust.

He said that Covid cases were rising among the younger years in secondary school, but there were few cases in the top years, "where many students have already had the jab".

Any unauthorised use of the NHS logo was taken very seriously, said a spokeswoman for the Department of Health and Social Care.

"Misinformation about the vaccine is dangerous and costs lives. We are continuing to do everything we can, working with local authorities and our NHS, to counter the spread of untruths with public information that is grounded in science and facts," said the DHSC spokeswoman.