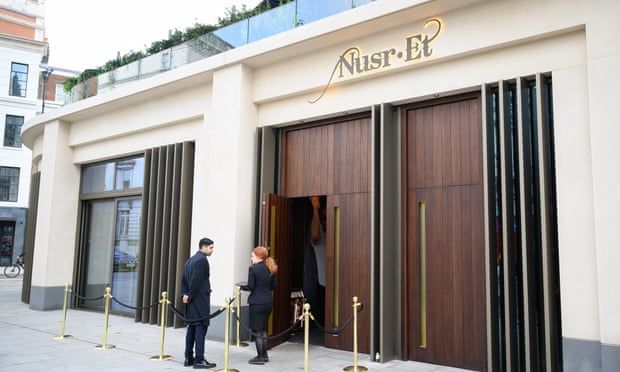 Nusret Gökçe’s ‘ludicrous’ Nusr-Et Steakhouse charges more than £600 for a tomahawk steak
The London restaurant of Salt Bae, a flamboyant, condiment-sprinkling chef, has reported £7m in sales in its first three months.

Nusr-Et Steakhouse, the outlet at the Park Tower hotel in Knightsbridge known for outrageously priced items such as tomahawk steaks wrapped in gold, also made pre-tax profits of £2.3m in the year to December having only opened its doors in late September, according to accounts filed at Companies House first reported by The National.

The company, which is controlled by Turkish conglomerate Doğuş Group, said the restaurant had “performed higher than the expected results” despite the effect of the Omicron variant of Covid-19 on the hospitality industry in the UK at the end of last year.

The results may be unsurprising as shortly after the London branch opened, a photograph of a £1,812.40 receipt for a table of six, including £1.40 cans of Red Bull at £11, went viral.

The London outpost of Salt Bae’s chain, described by Observer critic Jay Rayner as a “ludicrous restaurant”, charges more than £600 for a giant tomahawk steak and £40 for a burger, with the cheapest item on the menu, some herb-crusted fries, coming in at £9. Fans of the chain reportedly include David Beckham, Leonardo DiCaprio and the Venezuelan president, Nicolás Maduro.

Diners are attracted partly by the chance to meet Salt Bae, the Turkish butcher turned steak-monger Nusret Gökçe behind the brand, who has gained more than 40 million Instagram followers since a video of him decked out in a tight white T-shirt and dark glasses completing his elaborate steak-salting move.

The group is advertising waiting jobs at more than £15 an hour plus tips, but that remains below the cost of a plate of baklava for dessert in the restaurant.

Doğuş has more than 20 Nusr-Et restaurants around the world, nearly half of which are in Turkey, where it first launched an outlet in 2010. The conglomerate also owns the Saltbae burger chain and Cafe di Dolce patisserie.