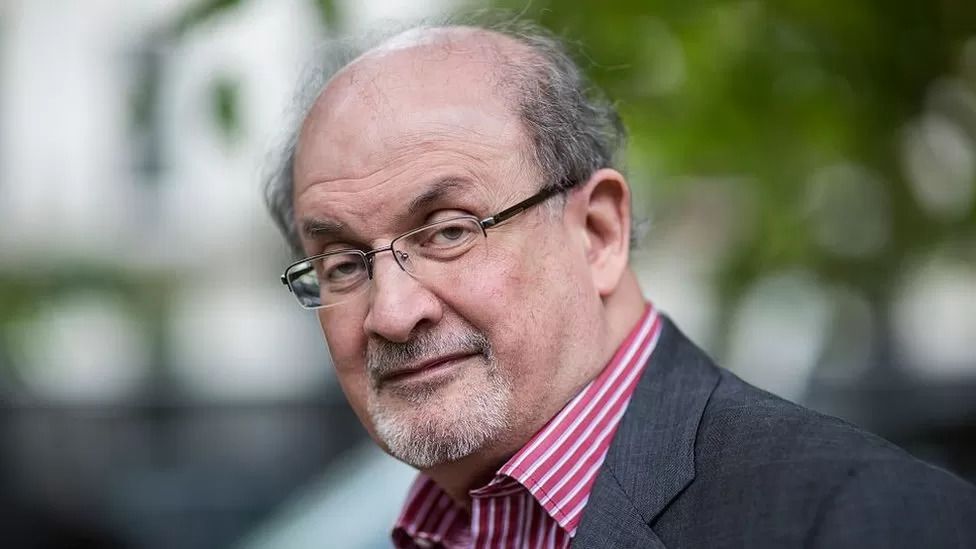 Hadi Matar has been remanded in custody without bail after pleading not guilty, said the prosecutor in Chautauqua County, New York State.

Mr Matar is accused of running onto the stage and attacking Mr Rushdie and an interviewer at the event held by a local educational centre.

The writer is in a critical condition.

Mr Rushdie, 75, has faced years of death threats for his novel The Satanic Verses, which some Muslims see as blasphemous.

Police detained Mr Matar from Fairview, New Jersey, shortly after the attack at the Chautauqua Institution.

Appearing in court on Saturday afternoon, the suspect wore a facemask and prison uniform before entering his plea of not guilty.

"This is the very early stage of what will invariably be a protracted legal process," District Attorney Jason Schmidt said in a statement.

There has been an outpouring of support for Mr Rushdie, with the attack condemned as an assault on freedom of expression.

Later on Saturday, President Joe Biden said in a statement that he was "shocked and saddened" by the "vicious attack".

Mr Rushdie had refused to be "intimidated or silenced" in his career, and stood for "essential, universal ideals", Mr Biden added.

The writer was stabbed at least 10 times - including in the face, neck and abdomen, which damaged his liver, authorities said.

He has been put on a ventilator, is unable to speak, and may lose one eye, his agent said.

The interviewer who was with Mr Rushdie, Henry Reese, suffered a minor head injury. Mr Reese is the co-founder of a non-profit organisation that provides sanctuary to writers exiled under threat of persecution.

No motive has yet been confirmed by police, who said on Friday that they wanted to examine a backpack and electronic devices found at the centre.

A review of Mr Matar's social media accounts has suggested he is sympathetic to the causes of the Islamic Revolutionary Guard Corps (IRGC), NBC News reported.

The IRGC is a major military and political force in Iran - however, no link has been definitively established.

Mr Matar was born in the US to parents who had emigrated from Lebanon, a Lebanese official told the Associated Press news agency.

Two security officials were on duty at the centre at the time of the attack - one making the subsequent arrest.

However, some of the visitors have questioned why security was not tighter for a man with a bounty of more than $3m (£2.5m) on his head.

Like other people planning to attend the author's lecture, Mr Matar had obtained a pass to enter the Chautauqua Institution grounds, the group's president said.

Indian-born novelist Mr Rushdie shot to fame with Midnight's Children in 1981, which went on to sell over one million copies in the UK alone.

But his fourth book, published in 1988 - The Satanic Verses - forced him into hiding for nearly 10 years.

The surrealist, post-modern novel sparked outrage among some Muslims, who considered its content to be blasphemous - insulting to a religion or god - and was banned in some countries.

A year after the book's release, Iran's Supreme Leader Ayatollah Khomeini called for Mr Rushdie's execution. He offered a $3m (£2.5m) reward in a fatwa - a legal decree issued by an Islamic religious leader.

The bounty over Mr Rushdie's head remains active, and although Iran's government has distanced itself from Mr Khomeini's decree, a quasi-official Iranian religious foundation added a further $500,000 to the reward in 2012.

There has been no reaction from the Iranian government to Mr Rushdie's stabbing. Iranian media described him as an apostate - someone who has abandoned or denied his faith - in their coverage.

Mr Rushdie, a British-American citizen, has become a vocal advocate for freedom of expression, defending his work on several occasions. He has also continued to write, with his next work due out in 2023.