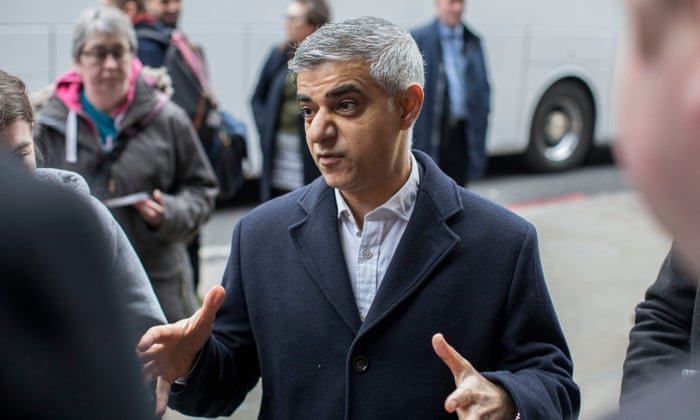 Mayor’s pledge on air pollution to form part of vision for green new deal for London
Sadiq Khan will promise to put London on a par with Scandinavian capitals by making it a carbon-neutral city by 2030 if he is re-elected as mayor of the capital later this year.

The Labour politician’s pledge to tackle air pollution forms part of his first major pitch to voters in the upcoming mayoral race, in which he will go up against Conservative, Lib Dem, Green and independent rivals.

Khan’s strategy to go carbon-neutral forms part of his vision for a “green new deal” for London, which he would roll out during a second term. This will involve a 10-point plan that will be outlined in his manifesto before the mayoral election on 7 May.

In a speech to the Fabian Society new year conference in central London on Saturday, he is expected to say the 2030 target is essential to prevent the poorest communities being affected by poor air and the thousands of premature deaths in the capital each year.

“My pledge to deliver a green new deal for the city with a target for London to be carbon-neutral by 2030 will help tackle the climate emergency and the air pollution crisis.

“Some may say that a 2030 target isn’t achievable but I say we can’t afford not to try. This is a matter of social justice because it’s the poorest communities that are being hit hardest,” said Khan, who became the first Muslim mayor of any western capital city when he was elected in 2016.

The majority of the biggest political parties in the UK have set ambitions for the country to reach net-zero emissions by particular dates that range from the 2030s through to the 2050s.

Despite Labour activists passing a commitment at their autumn party conference to work towards net-zero carbon emissions by 2030, the party ended up softening its pledge for last month’s election after pressure from trade unions and the impact it would have on industrial jobs.

The Conservatives have a policy of hitting net-zero by 2050 and the Liberal Democrats pledged a date of 2045. The Green party has pledged to go carbon-neutral by 2030.

Across Europe, three Nordic cities – Copenhagen, Oslo and Stockholm – have made firm commitments to be carbon-neutral or fossil fuel-free between 2025 and 2030.

Khan has said green commitments will be a dividing line between his campaign and his nearest rival, Conservative Shaun Bailey, who is behind him in the polls.

A survey by Queen Mary University of London’s Mile End Institute found Khan was the first preference candidate of 43% of Londoners. Bailey is on 23%.

“The election on 7 May is a two-horse race between me and the Tory candidate,” Khan told the Guardian.

To achieve a carbon-neutral status for London, he said City Hall would lead the way in implementing tougher environmental standards, moving away from fossil fuels and reducing waste.

Public transport will become greener, he said, and he will commit to trying to get billions of pounds worth of government investment. One example to help reduce emissions is retro-fitting houses to make them more energy-efficient.
Add Comment