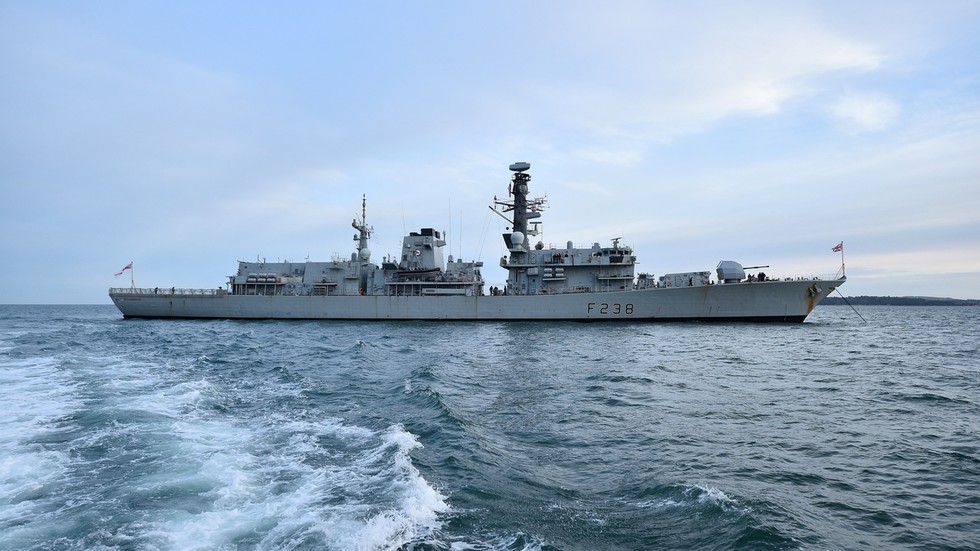 The moment a UK warship’s underwater sonar was allegedly hit is said to have been caught on camera
A towed sonar array of the Royal Navy’s HMS Northumberland was hit by a Russian submarine 13 months ago, the UK Ministry of Defence has claimed, after British media reported the incident was captured by a documentary film crew.

“In late 2020, a Russian submarine being tracked by HMS Northumberland came into contact with her towed array sonar,” a Ministry of Defence spokesman alleged, in a rare comment on UK Navy operations. The collision reportedly damaged the sonar – a large tube filled with sensitive equipment that the ship was towing underwater hundreds of meters behind it.

HMS Northumberland was scouting for the “hunter-killer” submarine in the Arctic Circle, some 200 miles north of Scotland, when it disappeared from the ship’s radar. The British MoD did not provide any details to prove it was indeed a Russian undersea vessel, and Russian authorities have not commented on the incident.

A Channel 5 crew was aboard at the time of the incident, filming a documentary series titled ‘Warship: Life at Sea’. The crew supposedly captured the incident on camera, and it was included in the documentary.

The video in question does not show anything resembling a submarine. The footage shows sailors on board HMS Northumberland as they run around and swear, all against the background noise of an alarm signal.

“Northumberland has been hit,” an offscreen narrator says, with another voice wondering out loud: “What the f*** have I just hit?” Only sea waves can be seen out of the ship’s illuminators in the documentary footage.

The sonar was badly damaged in the encounter and the ship had to interrupt its mission and return to a Scottish port to have it replaced, according to British media. The reasons for the collision were not exactly clear, and a UK Mod source told media that it was “highly unlikely” the incident was deliberate.

The video, set to dramatic music, also shows the British vessel’s commander deciding to “close in” on the submarine to supposedly let its crew know they had been found. “We are very close to the submarine. We’re probably parallel. If they were on the surface, we would definitely see faces,” a person, who appears to be a crew officer, says on the video.

The reasons for HMS Northumberland’s tracking of any submarine in the remote region were not exactly clear. The MoD limited itself to saying that “the Royal Navy regularly tracks foreign ships and submarines in order to ensure the defence of the United Kingdom.”
Add Comment