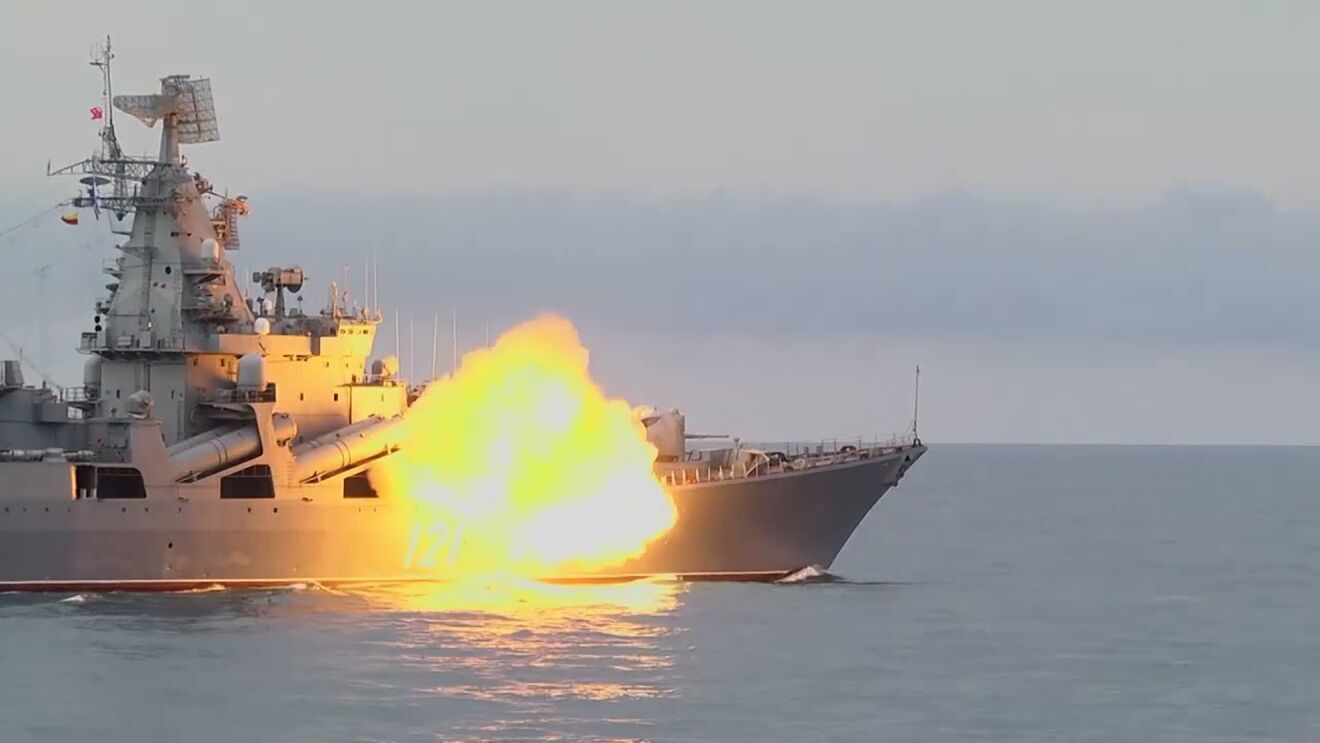 Russia’s Defence Ministry says the flagship of its Black Sea fleet sank while being towed to a port after being badly damaged.
Russian news agencies reported that the Moskva sank on Thursday, Moscow time, in a storm after being gutted by fire. The ministry previously said that the fire on the warship set off some of its weapons and forced the crew to evacuate.

Ukrainian officials said that the warship was hit by Ukrainian missiles late Wednesday off the Black Sea port of Odessa.

The warship named for the Russian capital was 60 to 65 nautical miles (110 to 120 km) south of the Ukrainian port when the fire ignited, and the vessel was still battling flames hours later while heading east, according to a Pentagon official.

The loss of the ship is a major military setback and a devastating symbolic defeat for Moscow as its troops regroup for a renewed offensive in eastern Ukraine after retreating from much of the north, including the capital.

The ship, which would typically have 500 sailors on board, could carry 16 long-range cruise missiles, and its removal from combat would greatly reduce Russia’s firepower in the Black Sea.

Now entering its eighth week, Russia’s invasion has stalled because of resistance from Ukrainian fighters bolstered by weapons and other aid sent by Western nations.

Satellite photos from Planet Labs PBC show the Moskva steaming out of the port of Sevastopol on the Crimean Peninsula on Sunday. But cloud cover on Thursday made it impossible to use satellite images to locate the ship or determine its condition.

The news of the loss of the flagship overshadowed Russian claims of advances in the southern port city of Mariupol, where they have been battling the Ukrainians since the early days of the invasion in some of the heaviest fighting of the war — at a horrific cost to civilians.

The loss of the Moskva could also delay any new, wide-ranging offensive.

Maksym Marchenko, the governor of the Odesa region, across the Black Sea to the northwest of Sevastopol, said the Ukrainians struck the ship with two Neptune missiles and caused “serious damage.”

Oleksiy Arestovych, an adviser to Ukraine’s president, then said the ship sank, calling it an event of “colossal significance.” But Yuriy Sak, an adviser to Ukraine’s defence minister, later said he was unable to confirm that the ship was sunk or even hit by Ukrainian forces. He said he was aware of the comments by other Ukrainian officials but “could neither confirm nor deny” what happened.

“If or when this is confirmed, if it is confirmed, we can only have a sigh of relief because this means that fewer missiles will reach Ukrainian cities,” he told The Associated Press.

Russia’s Defence Ministry said ammunition on board detonated as a result of a fire, without saying what caused the blaze. It said the “main missile weapons” were not damaged. In addition to the cruise missiles, the warship also had air-defence missiles and other guns.

The Neptune is an anti-ship missile that was recently developed by Ukraine and based on an earlier Soviet design. The launchers are mounted on trucks stationed near the coast, and, according to the Washington-based Centre for Strategic and International Studies, the missiles can hit targets up to 280 kilometres away. That would have put the Moskva within range, based on where the fire began.

During the first days of the war, The Moskva was reportedly the warship that called on Ukrainian soldiers stationed on Snake Island in the Black Sea to surrender in a standoff. In a widely circulated recording, the soldier responds: “Russian warship, go fuck yourself.”

The Ukrainian government recently issued a commemorative stamp of the event on Snake Island.
Add Comment