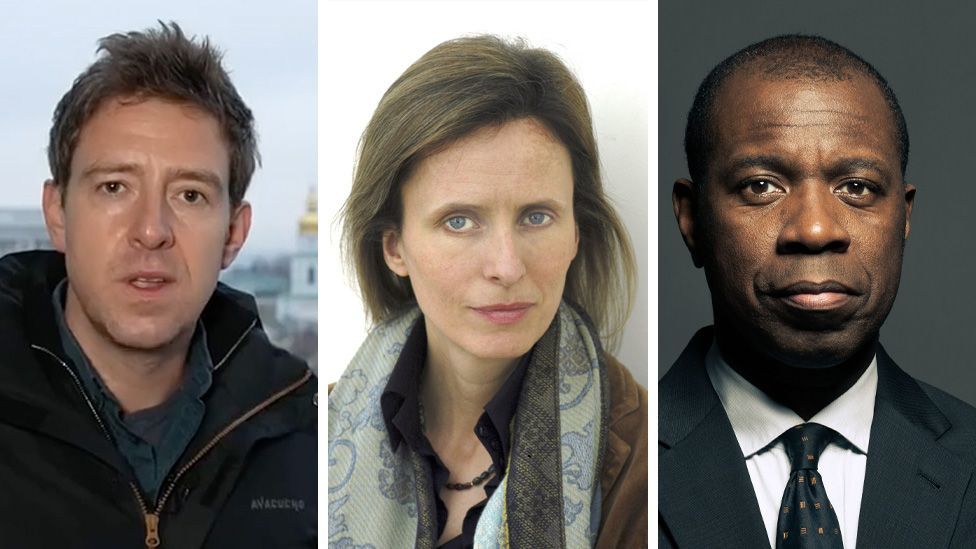 Russia-Ukraine war: Some of UK's top journalists barred from Russia

Russia has barred top UK-based journalists and defence figures as part of sanctions, in response to UK measures on Russian public figures.

The BBC's Clive Myrie, Orla Guerin, Nick Robinson and Nick Beake, who have reported from Ukraine, and Director General Tim Davie are on the list.

The BBC "will continue to report independently and fairly", a spokesperson said.

The foreign ministry in Moscow announced that work on expanding the list, which includes 29 members of the media and 20 persons "connected to the defence complex", would continue.

"The British journalists included on the list are involved in deliberate dissemination of false and one-sided information about Russia and events in Ukraine and Donbas," Russia's foreign ministry said. "With their biased assessments they also contribute to fuelling Russophobia in British society."

In her most recent piece for the BBC, Orla Guerin reported from the Ukrainian city of Lysychansk, where she said the fabric of the city was being destroyed in a deliberate scorched earth policy. Clive Myrie reported live from Kyiv as Russian troops invaded Ukraine, attempting to capture the capital in the early days of the war.

The other BBC staff on the list are diplomatic correspondent Paul Adams, who has also reported from Ukraine, and corporation chairman Richard Sharp.

Sky News chief correspondent Stuart Ramsay, who is also on the list, was wounded in a Russian ambush while reporting outside Kyiv at the same time.

Among the other high-profile journalists on the list are John Witherow, editor of The Times, Chris Evans of the Telegraph, Katharine Viner of the Guardian and Ted Verity of the Daily Mail.

Correspondents Shaun Walker and Luke Harding of the Guardian are on the list, along with presenters Sophy Ridge of Sky News and Cathy Newman of Channel 4 News, columnists Con Coughlin of the Daily Telegraph and Gideon Rachman of the FT, and Russia academic Mark Galeotti.

Shaun Walker said he was not racing to visit Russia but it was still a "very strange/sad feeling" to be on the list, after living in Russia for more than a decade.

Russia has closed down independent media outlets and criminalised reporting of anything it considers to be "false information" about its war in Ukraine. Moscow refuses to call its invasion a war, labelling it a "special military operation".

Russia has also targeted journalists and other figures it does not like with the label "foreign agent". The European Court of Human Rights ruled on Tuesday that this legislation violated the rights of those involved.

Beyond the world of journalism there are senior figures on the sanctions list in the armed forces, including Royal Navy chief Adm Sir Ben Key and Air Force chief Sir Michael Wigston. The head of Thales UK, Alex Cresswell, and several senior colleagues are barred from Russia as are a number of top figures from BAE Systems, including overall CEO Charles Woodburn.

Watch: Lysychansk has been bombarded by Russian artillery
Add Comment