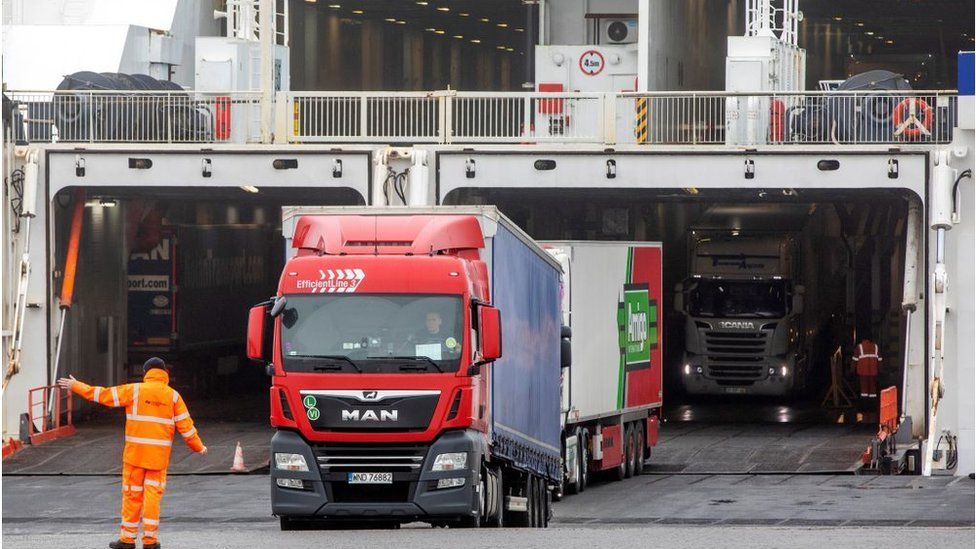 There could be further disruption to trade with the EU this year if more is not done to improve post-Brexit border arrangements, MPs have warned.

The cross-party Public Accounts Committee (PAC) said the main impact of Brexit on UK firms had been "increased costs, paperwork and border delays".

But it said things could worsen this year as new import controls come in.

The government said it continued to ensure businesses "got the support they need to trade effectively with Europe".

It comes as Jacob Rees-Mogg has been appointed minister for Brexit opportunities as part of a cabinet reshuffle. The prominent Leave campaigner will look at which EU rules may be scrapped now the UK has left the bloc.

In its report, the Public Accounts Committee (PAC) said it was concerned about what will happen when passenger traffic across the UK border returns to normal levels as the pandemic subsides.

And it described government plans to create the most effective border in the world by 2025 as "optimistic, given where things stand today".

The report says trade volumes have been suppressed by the impact of Covid-19, and wider global pressures in supply chains, since the UK left the EU customs union and single market.

But it is clear, the report adds, that leaving the EU also had an impact by increasing the bureaucratic burden on businesses.

"One of the great promises of Brexit was freeing British businesses to give them the headroom to maximise their productivity and contribution to the economy - even more desperately needed now on the long road to recovery from the pandemic," said PAC chair Meg Hillier.

"Yet the only detectable impact so far is increased costs, paperwork and border delays." 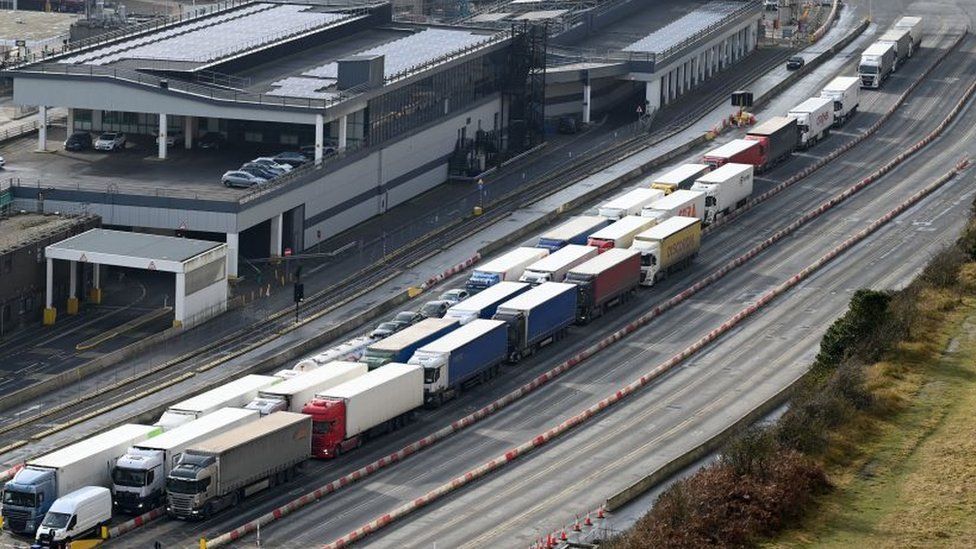 Container lorries queuing at the Port of Dover

The report says there is potential for further disruption during the course of this year as more people start travelling again, and passenger volumes at key ports like Dover increase.

New border systems have yet to be tested with traffic back at what were normal levels, before the pandemic struck.

There is also a significant risk of more delays later this year when the EU introduces biometric passport controls under its new Entry and Exit System.

The Cabinet Office told the PAC that discussions are underway with French officials about how this might work in practice at busy ports like Dover, where - says the report - "it is important that checks that apply to HGV drivers do not delay the throughput of lorries".

Another big test identified by the committee will be the phased introduction of controls on imports into the UK, which began on 1 January.

Physical checks on the import of food products are due to begin in July, and the British Port Authority told the PAC it needs greater clarity about the precise arrangements, including the percentage of products which will be checked.

The MPs also raised concern about the potential for smuggling before new border infrastructure is completed close to Dover.

Lorries arriving at the port will have to travel 60 miles to Ebbsfleet, if their consignments need to be physically checked by customs officers. That increases the risk, the committee warns, that goods could be offloaded on the way.

HM Revenue and Customs has said it will look at what surveillance might be necessary to manage that risk.

But there is a lot more the committee wants done. And it is calling for more transparency from government about the problems businesses are facing.

Meg Hillier says the PAC has repeatedly reported on Brexit preparedness, and there have been delays to promised deadlines at every stage.

"It's time the government was honest about the problems rather than overpromising," she said.

In particular, the PAC wants the government to do more to help small firms prepare for the extra burdens they are having to deal with, and to consider further support.

It says only £6.7m of the £20m offered under the SME Brexit Support Fund was paid out, because narrowly defined criteria meant many businesses missed out on funding.

It also urges the government to write to the committee, within six months, setting out the timetable for its planned programme of work on the "noteworthy ambition" to create the world's most effective border by 2025.

A government spokeswoman said: "Traders have adapted well to the introduction of full customs controls on 1 January, with minimal disruption at the border and inbound freight flowing effectively through ports.

"We are continuing to ensure that businesses get the support they need to trade effectively with Europe and seize new opportunities as we strike trade deals with the world's fastest growing markets, including one-to-one advice through the free-to-use Export Support Service."