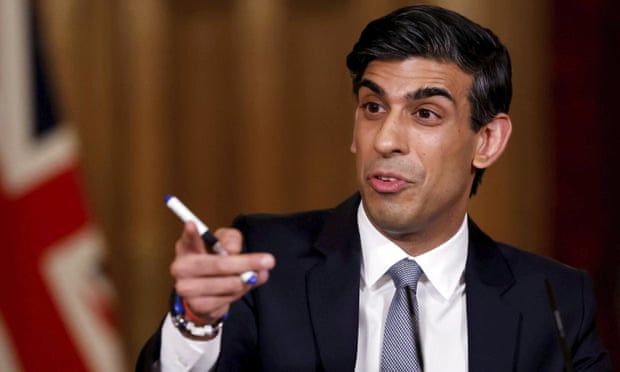 Number of workers on payrolls up by 356,000, with easing of Covid controls having impact on hiring

Rishi Sunak said Britain’s economy was bouncing back after the latest official figures showed the number of workers on payrolls surged in June by 356,000.

While the number of employees remained more than 200,000 below the level before the start of the pandemic, data from the Office for National Statistics (ONS) showed the easing of restrictions on businesses had an impact on hiring in recent months.

Evidence of an improving labour market was also provided by an increase in job vacancies to 862,000 after a rise of 241,000 between April and June. With firms struggling to find workers in some sectors, vacancies are 10% higher than they were in early 2020.

Annual pay growth in the three months ending in May stood at 7.3% – up from 5.7% in April – although the increase reflects the fact that many low-paid workers lost their jobs during pandemic-enforced lockdowns. 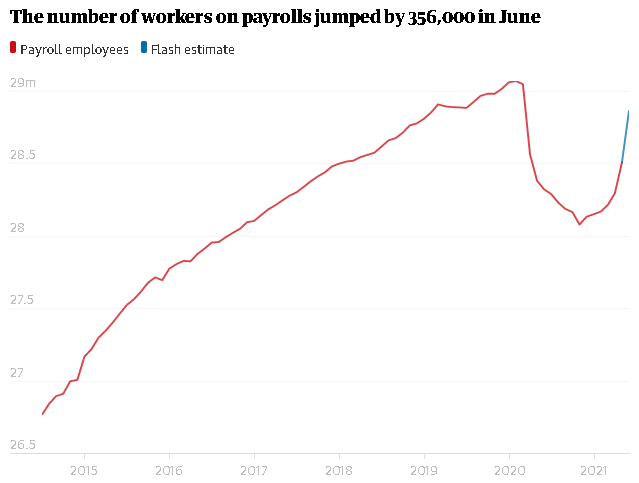 The director of economic statistics development at the ONS, Darren Morgan, said: “The labour market is continuing to recover, with the number of employees on payroll up again strongly in June. However it is still over 200,000 down on pre-pandemic levels, while a large number of workers remain on furlough.

“Our first, more detailed, local figures show that since November last year, when the number of employees reached a low point nationally, the biggest growth was seen in Leicester, while the smallest was in south Hampshire.

“The number of job vacancies continued to rise very strongly. The biggest sector driving this was hospitality, followed by wholesaling and retailing.

“As the economy gradually reopened, the unemployment rate fell in March to May. This was especially marked for younger people, who had been hardest hit by earlier lockdowns.”

The chancellor, Sunak, said: “As we approach the final stages of reopening the economy, I look forward to seeing more people back at work and the economy continuing to rebound.

“We are bouncing back – the number of employees on payrolls is at its highest level since last April and the number of people on furlough halved in the three months to May.”

The ONS calculates the health of the labour market in a number of ways, using different methodology and covering different periods.

The most timely measure – HMRC figures for payrolls – showed a rise of 356,000 in June. The Labour Force Survey showed employment up by 25,000 in the three months ending in May and the jobless rate holding steady at 4.8%.