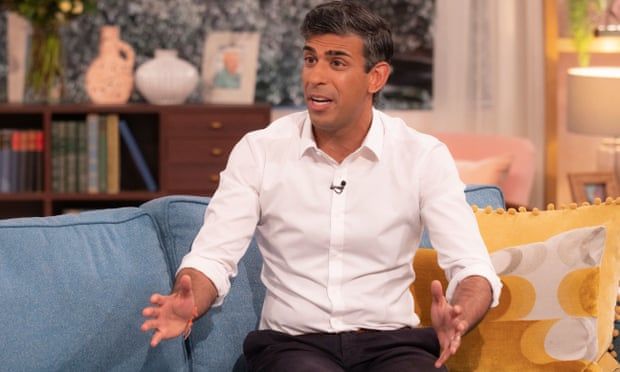 Former chancellor talks about favourite breakfast meal, which went off menu in 2020
Rishi Sunak’s habit of slightly awkward interactions with the everyday world has continued after he talked of enjoying McDonald’s breakfast wraps – an item that disappeared from the fast food chain’s UK menu nearly two-and-a-half years ago.

The former chancellor was speaking to ITV’s This Morning programme a day after he was photographed at a branch of McDonald’s, where again he appeared to struggle slightly to make a contactless card payment.

Asked by hosts Rochelle Humes and Andi Peters what he had eaten, Sunak explained that it had been about 7.30am, and so he ate a bacon roll with ketchup and pancakes.

“If I’m with my daughters then we get the wrap,” the Conservative leadership hopeful continued. “My eldest daughter – if I’m with her, it’s the wrap with hash browns and everything in it. It’s what we do.”

However, a McDonald’s spokesperson confirmed the chain stopped selling breakfast wraps in March 2020, a move made permanent with an announcement in January this year.

A source from Sunak’s campaign said he had eaten the wraps with his children when they were on the menu: “I think given he’s barely seen his kids in the last two-and-a-half years, it’s likely he hasn’t been to McDonald’s in that time.”

During his time as a minister, and especially amid the battle to succeed Boris Johnson, Sunak and his team have sought to present the wealthy former banker as someone nonetheless in touch with the concerns of voters.

A photoshoot for the budget in March, when he was still chancellor, showed Sunak at a petrol station filling up a car that later turned out to be borrowed. He was then pictured trying to pay by holding his bank card up to a barcode scanner, rather than the payment machine.

On This Morning on Thursday, Sunak received a half-mocking round of applause from within the studio after the hosts said his McDonald’s photoshoot showed him successfully paying with a card. “I’ve managed to work it out,” he joked.

However, some observers have raised questions about the image of Sunak holding a card against the contactless payment point of a McDonald’s self-order kiosk, posted to Instagram with the self-mocking caption “Nailed it.”

They pointed out that the screen showed a message saying “Thank you for your order”, which only appears some seconds after the payment has been processed, indicating an element of artifice.

Elsewhere in the This Morning interview, Sunak said Johnson’s final attempts to stay in power despite dozens of ministerial resignations had been “a bit odd”.

Asked if Johnson had taken too long to resign, he said: “In the end it went on for a couple of days – it was a bit odd.”

Sunak confirmed that his efforts to contact Johnson after resigning as chancellor had been rebuffed.

Asked if the prime minister now talked to him, Sunak said: “No, no. I’ve reached out to him but understandably he’s not replied.”
#Boris Johnson  #Johnson
Add Comment