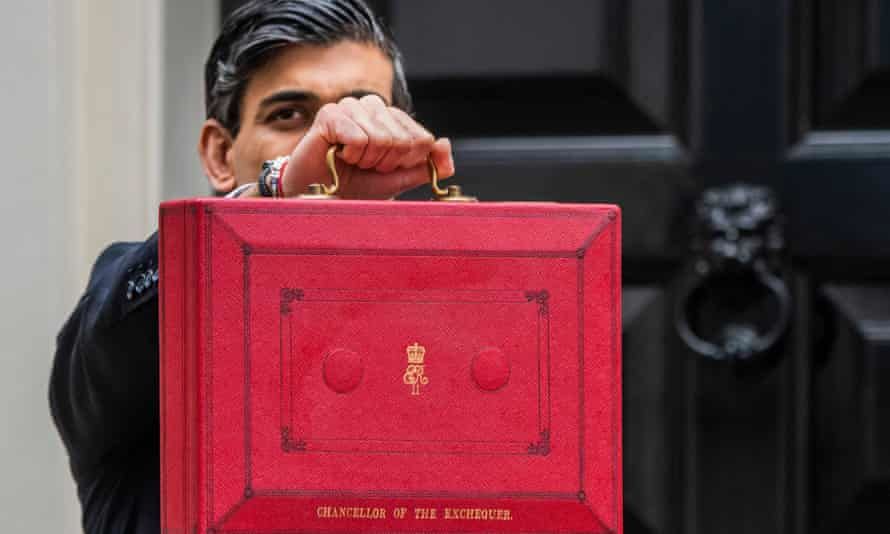 Rishi Sunak has outlined tax rises on companies and workers to pay for an additional £65bn of financial support to see Britain through the coronavirus pandemic, taking total government spending on the crisis to more than £400bn.

The chancellor trailed before the budget that he would extend the furlough scheme until September, and allocated billions of pounds in business grants and tax cuts to help employers while lockdown restrictions remain and the economy takes time to recover from the worst recession in 300 years.

Giving his budget speech in the Commons, Sunak said he would continue to do “whatever it takes” while it took time for growth to bounce back after restrictions have been lifted. “It’s going to take this country, and the whole world, a long time to recover from this extraordinary economic situation. But we will recover,” he said.

However, he said the rate of corporation tax would need to go up to 25% for the most profitable companies in Britain from April 2023, in a major reversal of Conservative economic policy of recent decades, to pay for the damage to the exchequer inflicted by Covid-19.

Aiming to raise £17bn a year by the middle of the decade, Sunak’s plan to increase the rate of corporation tax for the first time since Denis Healey in 1974 will, however, threaten a backlash from backbench Tory MPs more typically in favour of lower tax policies.

Plans to raise billions more from income taxes through a freeze in the threshold at which workers start paying them is also politically delicate ground for the Tories after promising in the 2019 election to keep taxes low. Although committing not to raise income tax, national insurance and VAT at the election, he set out plans for a stealth raid – holding the threshold for basic and higher rate earners steady until 2026, in a move that should raise about £8bn a year within five years. 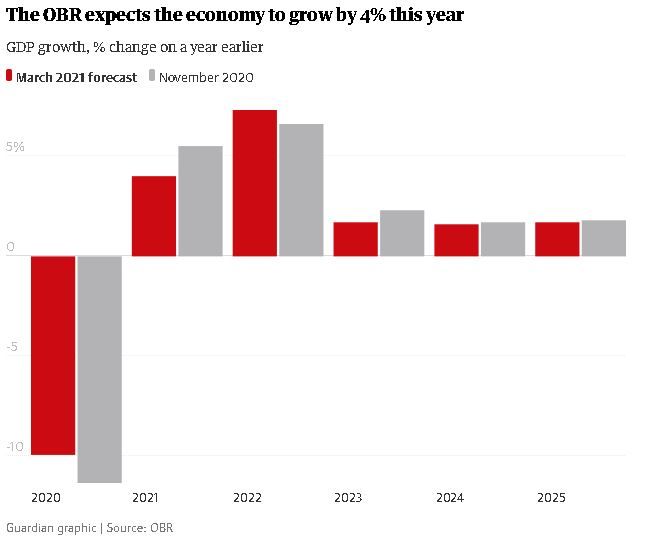 Making his 15th crisis-related announcement in a year when the pandemic crashed Britain’s economy into the deepest recession for more than 300 years, the chancellor said his priority was to see the economy emerge from the third lockdown without triggering mass unemployment and a wave of business failures.

Official figures announced by the chancellor forecast the British economy to grow by 4% this year, recovering from an almost 10% drop in 2020, with rapid progress on the vaccination programme enabling the economy to return to its pre-pandemic level by the middle of next year – six months earlier than expected.

Sunak said the budget deficit – the gap between spending and receipts – would, however, soar to a peacetime record of £355bn this year, or 17% of GDP, in a reflection of the scale of the government response to Covid-19. But because of his actions to raise taxes, the deficit is expected to shrink to less than 3% of GDP by the time of the next election in the middle of the 2020s. 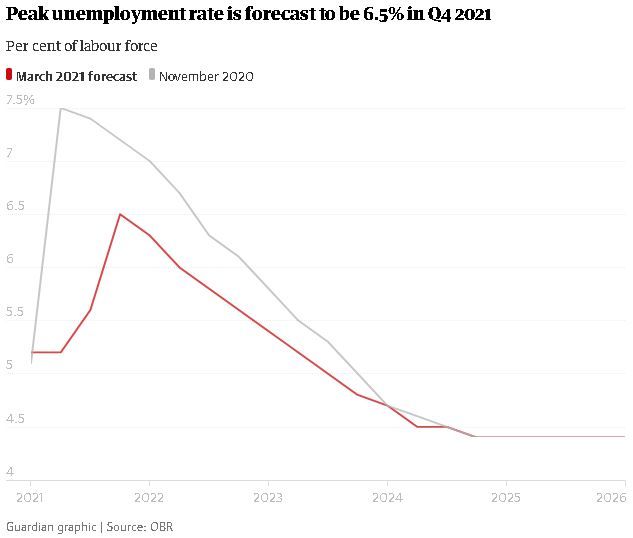 Keir Starmer, the Labour leader, said the budget “papered over the cracks” rather than setting out concrete plans to rebuild the foundations of Britain’s economy in stronger form than before the pandemic.

“I’m afraid this budget won’t feel so good for the millions of key workers who are having their pay frozen, for the businesses swamped by debt and the families paying more in council tax and the millions of people who are out of work or worried about losing their job,” he said.

Seeking to pin personal responsibility on Sunak for other government decisions about tackling the pandemic, Starmer said “after 11 months in this job it’s nice to finally be standing opposite the person actually making decisions in this government”. 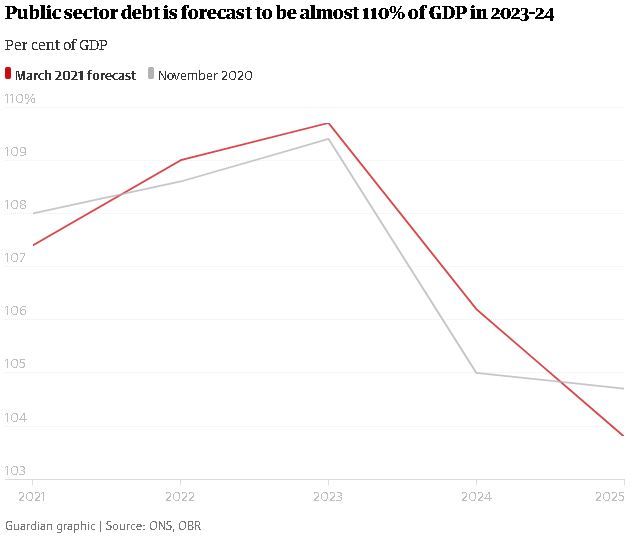 He also blamed “the chancellor’s decisions” for Britain facing a “worse economic crisis than any major economy”, accusing him of having blocked a “circuit-breaker” in September 2020 to clamp down earlier on rising Covid cases.

On policy, the Labour leader said the budget was “almost silent” on the NHS and social care, and that the measures announced on Wednesday “stop way short of what was needed” to tackle the climate emergency. 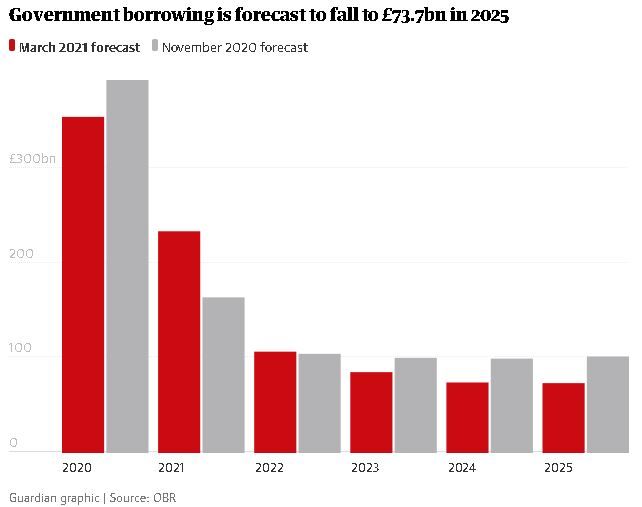 Crucially, Starmer seemed to lend his support to corporation tax rising “in the long run”, but he said Sunak was “itching to get back to his free-market principles and pull away support as quickly as he can”.

“One day we’ll all be able to take our masks off and so will the chancellor and then you’ll see who he really is,” the Labour leader added.

Conservatives broadly rallied round Sunak, though the Tory chair of the Treasury select committee, Mel Stride, admitted concern that no plan was revealed to help small and medium-sized companies manage high levels of debt they may have built up to stay afloat.

“Many of those businesses will struggle with the level of debt they have and will not be growing when we want them to be creating the jobs of the future,” he said.

And Julian Knight, a Tory MP who chairs the digital, culture, media and sport select committee, added it was “greatly disappointing” no cancellation insurance scheme for festivals was promised, to give a “safety net” to organisers hoping to hold events this summer.