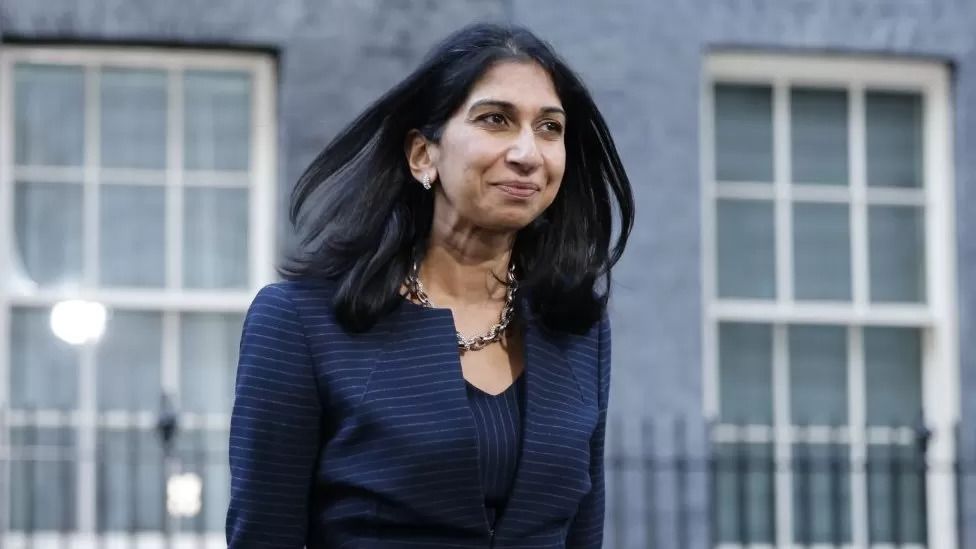 He also asked if officials had raised concern over the appointment.

Mr Sunak avoided the question but argued bringing Ms Braverman back into cabinet brought "experience and stability" to government.

A No 10 spokesperson later denied reports that Simon Case - the head of the civil service - had been "livid" about the appointment.

Taking his first Prime Minister's Questions, Mr Sunak justified his decision telling MPs: "The home secretary made an error of judgment but she recognised that, she raised the matter and she accepted her mistake."

He hit back at the Labour leader, accusing the party of being "soft on crime and in favour of unlimited immigration".

Sir Keir pointed to his own experience as head of the Crown Prosecution Service adding: "I know first hand how important it is that we have a home secretary whose integrity and professionalism are beyond question.

"He's so weak, he's done a grubby deal trading national security because he was scared to lose another leadership election - there's a new Tory at the top but as always with them party first, country second."

The Liberal Democrats have also been critical of the appointment with the party's home affairs spokesperson Alistair Carmichael saying: "A home secretary who broke the rules is not fit for a Home Office which keeps the rules."

SNP Westminster leader Ian Blackford accused the prime minister of doing "a sleazy backroom deal to shore up his own position".

Opposition parties are calling for investigations - the Liberal Democrats want an inquiry into Ms Braverman's appointment "including any promises Sunak made to her behind closed doors", while Labour wants one into possible security breaches by the home secretary.

Some Conservative MPs have also privately expressed their concern to the BBC about the decision.

During an urgent questions on the subject in Parliament, Labour MP Angela Eagle asked if an independent ethics adviser would investigate Ms Braverman's behaviour.

Cabinet Office minister Jeremy Quin replied that Mr Sunak did intend to appoint a new adviser - the previous holder of the role quit earlier this year - but added that "events in the last administration would not be properly part of the remit of the new independent adviser".

In her resignation letter, she admitted committing a "technical infringement" of the rules by sending an official document to someone not authorised to receive it.

"I have made a mistake; I accept responsibility; I resign," she wrote.

Her letter also hinted at disagreements with Ms Truss over immigration policy expressing concern that the government was not delivering on commitments to tackle illegal migration.

However, on his first day as prime minister Mr Sunak re-appointed Ms Braverman as home secretary.

It came three days after Ms Braverman had thrown her support behind him in the contest to replace Ms Truss, in what was widely seen as a significant endorsement by an influential MP on the right-wing of the Conservative party.

Asked if Ms Braverman had been given the job as a reward for supporting the new PM, Foreign Secretary James Cleverly told the BBC Mr Sunak had strong support from MPs in the contest adding: "I doubt he needed any particular individual endorsement."

The row over Ms Braverman's new job, came as MPs on the Home Affairs Committee heard evidence on Channel crossings.

They had been due to hear from the immigration minister Tom Pursglove, but his appearance was cancelled after he lost his job in Tuesday's cabinet reshuffle.

Instead MPs heard from Dan O'Mahoney - the Home Office's clandestine Channel threat commander - who told the committee that 38,000 people have arrived in the UK so far this year in small boats - an increase compared to last year's figure of 28,526.

The committee also heard that around 93% of people arriving in small boats this year have claimed asylum. However, there is a backlog in processing claims and only 4% of applications from 2021 have been processed.

Mr O'Mahoney also noted there had been a huge increase in the number of Albanians arriving in the UK illegally - 21,000 in the UK this year, compared to 50 in 2020.