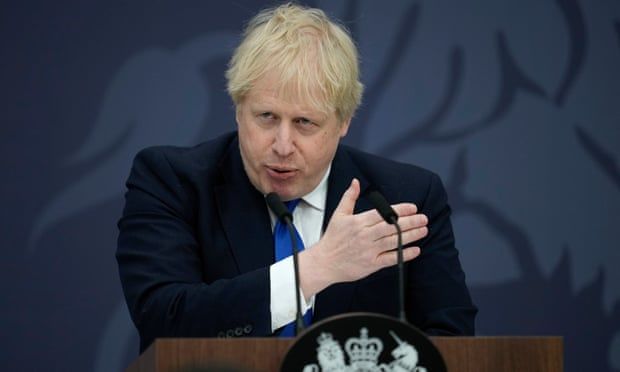 Labour said that a fresh Partygate revelation on Sunday implied that Boris Johnson instigated one of the No 10 parties that he has denied attending.

The deputy Labour leader, Angela Rayner, spoke out after the Sunday Times reported that a gathering that took place in Downing Street on Friday 13 November 2020 took on the nature of a leaving party only after Johnson arrived and started pouring drinks.

She said: “While the British public was making huge sacrifices, Boris Johnson was breaking the law.

“If the latest reports are true, it would mean that not only did the prime minister attend parties, but he had a hand in instigating at least one of them. He has deliberately misled the British people at every turn.

“The prime minister has demeaned his office. The British people deserve better. While Labour has a plan for tackling the cost of living crisis, Tory MPs are too busy defending the indefensible actions of Boris Johnson.”

The revelation will intensify demands for a Commons debate this week about whether Johnson lied to parliament when he told MPs repeatedly that parties did not take place at No 10 and that Covid rules were followed at all time.

The opposition parties have been discussing how best they could force a vote on this, and one possibility is tabling a motion saying Johnson has been in contempt of parliament.

Johnson has already said that he intends to correct the record when MPs return to the Commons on Tuesday after their Easter break. It will be his first appearance in the chamber since accepting a fine for breaking lockdown rules at a gathering in June 2020 to mark his own birthday, and he is expected to issue a fresh apology for what he claims was an inadvertent breach of the rules.

However, Johnson continues to insist that he never intentionally misled MPs in his many comments on Partygate in the Commons chamber. The ministerial code says intentionally misleading MPs – lying to them – is a resigning matter.

Johnson is facing three more fines over Partygate, one of which relates to an event he attended to mark the departure of Lee Cain, his communications director, in November 2020.

According to the Sunday Times, this did not feel like a leaving party until Johnson himself turned up. “He said he wanted to say a few words for Lee and started pouring drinks for people and drinking himself,” a source told the paper.

This account has been confirmed to the Guardian by a source familiar with what happened. Nobody had organised a leaving do in advance – although it was usual at the time for staff in the press office to drink on Friday evenings – but apparently when Johnson encouraged people to join in, staff felt obliged to.

The police are investigating this event and another gathering on the same day in the PM’s Downing Street flat, where his wife, Carrie Johnson, is alleged to have held a party to mark the departure of Cain and his ally Dominic Cummings, who had been Johnson’s chief adviser.

In December last year, the Labour MP Catherine West asked Johnson directly at PMQs if there was a party in Downing Street on 13 November. Johnson replied: “No, but I am sure that whatever happened, the guidance was followed and the rules were followed at all times.”

On Sunday, the Green party MP, Caroline Lucas, revealed that she had written to the Commons Speaker, Sir Lindsay Hoyle, asking if he would allow Johnson, and the chancellor, Rishi Sunak, to be held to account by MPs for misleading parliament. Sunak also received a fixed-penalty notice last week for attending the birthday party for the PM – inadvertently, he claims – despite having told MPs he did not attend any parties.

In her letter, Lucas said: “It is … appropriate that MPs have a way of scrutinising what’s happened, and for [Johnson and Sunak] potentially to be found in contempt of parliament.”

Lucas added that the matter could be referred to the standards committee or the privileges committee, or MPs could hold a vote on a motion saying Johnson was in contempt of parliament. “The last would be quickest and therefore potentially most appropriate,” she said.

The opposition parties, who have been discussing tactics before a potential vote, accept that Johnson would probably win because of the size of the Conservative majority. But they believe it would be embarrassing for Tory MPs to have to vote to exonerate him.

On Sunday, Jacob Rees-Mogg, the Brexit minister, told Radio 4’s The World This Weekend that he thought Johnson had spoken “in good faith” about Partygate.

Referring to the birthday party penalty, Rees-Mogg said: “Many people would think that they were in accordance with the rules, when they were meeting people they were with every day, who happened to wish them a happy birthday, because that was the day it was.

“I think that was a perfectly rational thing to believe. Now the police have decided otherwise and the police have an authority. But he wasn’t thinking something irrational or unreasonable, that that was within the rules.”