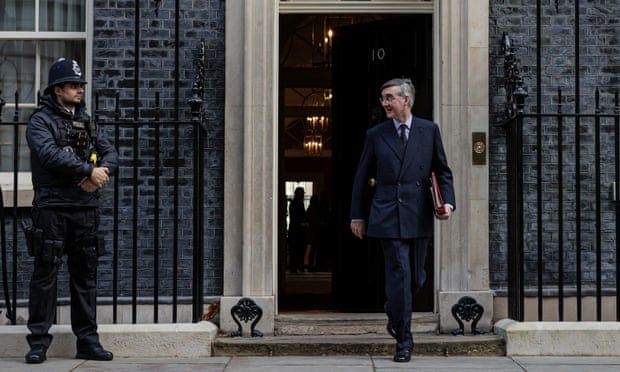 Chris Heaton-Harris takes over as chief whip in shake-up as PM seeks to reassure mutinous Tories
Boris Johnson has made Jacob Rees-Mogg the new minister for “Brexit opportunities” and installed a key loyalist as his chief whip in a reshuffle intended to shore up his position after weeks of terrible headlines.

Rees-Mogg, who was Commons leader, is moved to the Cabinet Office to take on a newly created role as Brexit opportunities minister, a cabinet-level job that also includes “government efficiency”.

Chris Heaton-Harris, formerly Europe minister in the Foreign Office, takes over as chief whip from Mark Spencer. Heaton-Harris was a key member of a parallel parliamentary organisation advising the prime minister amid his recent woes.

Spencer, a trusted ally of Johnson, was widely criticised by Conservative MPs over a series of missteps, including whipping them to support the disgraced MP Owen Paterson. He has been made leader of the Commons in place of Rees-Mogg, overseeing the passage of government legislation.

Stuart Andrew, who was deputy chief whip, is moved to be minister for housing in the Department for Levelling Up, Housing and Communities, taking over from Christopher Pincher, who is expected to become a whip. Andrew becomes the 11th housing minister in 12 years, a continual churn that housing groups have argued means the sector is not properly considered by government.

In other moves, two ministers have taken on additional Cabinet Office duties to help out Steve Barclay, the main minister in the department who was last week also appointed Johnson’s chief of staff – Michael Ellis, the paymaster general and a noted Johnson loyalist; and the whip Heather Wheeler.

In the Foreign Office, James Cleverly has taken over Heaton-Harris’s Europe brief. His existing role as minister for the Middle East, north Africa and North America will be redistributed among other ministers.

Labour criticised the new job for Spencer, saying it was “completely inappropriate” to have a Commons leader who was connected to an investigation of alleged racism, and whose whipping operation had been accused of seeking to blackmail MPs.

The Tory MP Nusrat Ghani alleged last month that, when she lost her job as a transport minister, she was told that “Muslimness” had been raised as a problem at a meeting in Downing Street. Spencer voluntarily identified himself as the person Ghani made the claims about, saying they were “completely false” and defamatory.

Also last month, the former Tory MP Christian Wakeford alleged that party whips told him he would lose funding for a new high school in his constituency if he did not vote with the government, while the senior Conservative backbencher William Wragg urged MPs to report ministers, whips and advisers to the Speaker or police for what he claimed was attempted blackmail of those suspected of opposing Johnson.

Thangam Debbonaire, the shadow Commons leader, said: “This is just the latest in a long line of appointments that demonstrates this government’s complete disregard for standards in politics.”

Heaton-Harris, the new chief whip, was accused of “McCarthyite” behaviour when he was universities minister by writing to vice-chancellors to demand a list of tutors lecturing on Brexit.

The changes come amid a wider shake-up of the team around Johnson, as the prime minister seeks to reassure mutinous Tory MPs, worried about alleged lockdown-breaking parties that are being investigated by police.

While Mirza’s departure was a surprise – her resignation letter condemned Johnson for falsely linking Keir Starmer to the failure to bring the paedophile Jimmy Savile to justice – the other three had been tipped to leave amid the fallout from the party claims.

Barclay will lead efforts to integrate his department with a new Office of the Prime Minister and liaise with backbenchers over areas such as future policy. In place of Doyle, Johnson appointed Guto Harri as director of communications, who held the same role for Johnson when he was mayor of London.

Mirza was swiftly replaced by Andrew Griffith, a former investment banker and Sky executive who entered parliament in 2019.

The internal reshuffle has faced some criticism. Some Tory MPs from northern “red wall” areas were critical of Griffith, who represents a safe seat in West Sussex, being handed a role shaping new government ideas.

Barclay’s role as an MP, minister and chief of staff raised eyebrows as to the potential workload, while Harri has been immediately embroiled in controversy.
#Boris Johnson  #Johnson
Add Comment