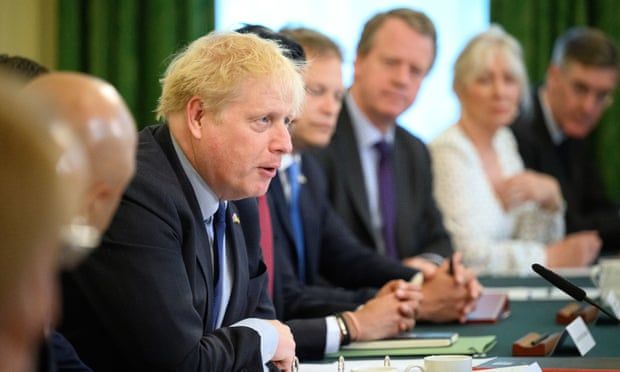 Rebel Conservative MPs are drawing up plans for “vote strikes” to paralyse law-making and capitalise on the dramatic Boris Johnson no-confidence vote.

Some of the 148 MPs who voted to oust the prime minister on Monday said they would try to stymie his government’s legislative agenda, as happened at the end of the Theresa May era, by abstaining on key laws.

They plan to start with a showdown over a bill to override sections of the Northern Ireland protocol, to be published within days.

Johnson suffered a worse-than-expected rebellion on Monday, with 40% of MPs voting to remove him. Under current rules, he is protected from another no-confidence vote for a year.

Having used up their most powerful tool, rebels on Tuesday said they wanted to “flex our muscles” and “prove we’re not going away”.

Those who declared no confidence in the prime minister spanned different factions of the party – from soft left, “One Nation” Conservatives unhappy with his policies on deporting asylum seekers to Rwanda and privatising Channel 4, to those who believe his high-tax, high-spend approach is too leftwing.

Given the uncoordinated way the vote was triggered, rebels jokingly referred to themselves as a “coalition of chaos”. Several said they had not been contacted by anyone encouraging them to vote Johnson out, claiming the swell of opposition was “organic”.

Johnson called the result, which he won with the backing of 211 MPs, “really good” and on Tuesday urged people to move on, saying it was time to “draw a line” under the row about his leadership and the Partygate scandal.

However, some rebels vowed to keep up their efforts to oust him by going on “vote strikes” – abstaining on key pieces of legislation they might have otherwise felt strong-armed into supporting.

Several gave the Northern Ireland bill, expected to be published this or next week, as an example and predicted there would be a “huge backlash” given Johnson and the government whips’ authority had been so publicly undermined.

While some rebels were happy to give No 10 until party conference season in September to prove he understood their concerns, others were less convinced drastic change was coming.

Nikki da Costa, director of legislative affairs when May was in No 10, said Johnson was unlikely to face widespread opposition on “the main substance of policy … but on detail of policy, you will see a real push for concessions”.

There “isn’t a clear policy ground that unites” the 148 rebels, she told BBC Radio 4’s World at One, comparing the likely logjam to that suffered by May in the dying days of her administration.

“It becomes a bit like whack-a-mole, and that’s really time-consuming and very arduous for any parliamentary operation,” Da Costa said.

Other rebels suggested Johnson would be forced to avoid tabling controversial legislation in a bid not to face embarrassing mass defiance by Tory MPs.

One likened the situation the prime minister faced to a scene from The Simpsons, in which the character Sideshow Bob is encircled by rakes and continually hit by them as he steps in different directions.

Some rebels also believe ministerial colleagues are likely to quit if the Conservatives lose two crucial byelections, due to be held on 23 June in the seats of Wakefield, and Tiverton and Honiton, in an effort to pile more pressure on Johnson.

They are also keen to bide their time until the privileges committee inquiry begins into whether Johnson misled parliament by repeatedly denying Covid laws were breached in Downing Street.

Some are unfazed about having a lack of levers to force Johnson out, believing he will “blow himself up”.

Tory MPs also believe a reshuffle will be carried out to promote those offered jobs in exchange for their loyalty and axe those who refused to publicly support Johnson – but that those who are demoted and passed over again could swing against him.

But sources said the chief whip, Chris Heaton-Harris, was opposed to a speedy reshuffle, and that any attempts at a government “reset” now would be overcome by events if the Tories lose both byelections.

One MP on the government payroll critical of Johnson said: “He already used the card that he was reshaping No 10. There’s nothing practical he can do to help bring 148 people onside. It’s obvious the game is up; it’s just a matter of when.”

After attention grew in No 10 on those frontbenchers who had not declared public support for the prime minister, a flurry were forced to clarify their position.

George Freeman, a minister, tweeted he was “NOT going to get drawn into a Twitter outing/Witch Hunt”. Nicola Richards, a ministerial aide, said that “although I share the anger of many of my constituents”, she “gave him my support on his reassurances and promises to deliver”.

While there was little appetite for immediately slashing the length of time Johnson is immune from another no-confidence vote from 12 months to six, some rebels are eyeing elections in the autumn to the 1922 Committee executive, which oversees such contests, as a de facto decision about whether that has changed.

Mark Harper, a former Conservative chief whip, gave Johnson a matter of weeks to “see the fruits” of the promises of reform. In a speech at the Adam Smith Institute, Harper said that despite the government’s nearly 80-seat majority “we’re not using it to deliver Conservative policies”.