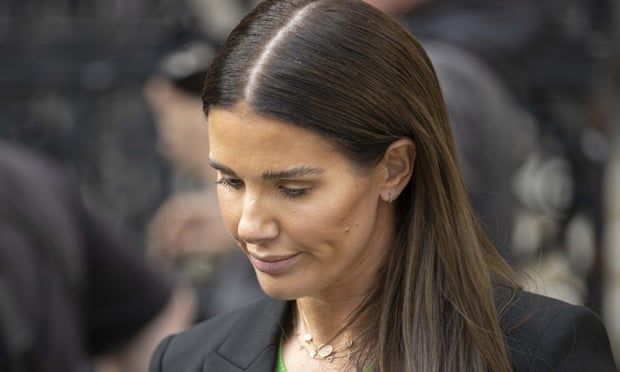 Rebekah Vardy has demanded “substantial” damages from Coleen Rooney after enduring “public abuse and ridicule on a massive scale”, as the “Wagatha Christie” libel trial drew to a close at the high court after two weeks of headline-grabbing and occasionally excruciating hearings.

Vardy said her life had been made hell as a result of the allegation in 2019 that she was leaking stories from Rooney’s private Instagram account to journalists at the Sun.

Hugh Tomlinson QC, acting for Vardy, said his client continued to face mockery, and the media were “full of jokes about this case”.

Vardy’s lawyers insist she did not leak stories to the Sun and say the most likely explanation is that Vardy’s agent, Caroline Watt, did so without her client’s knowledge or approval.

One of the most serious allegations made by Rooney’s legal team is that Vardy and her agent engaged in a deliberate campaign to destroy evidence. They allege this included the agent dropping her mobile phone in the North Sea after there was a request to search it, as well as the manual deletion of WhatsApp messages by Vardy.

Tomlinson said Vardy would have to be “very clever or very cynical” to have undertaken the manual deletion of WhatsApp messages. He said it would be an “extraordinarily complicated conspiracy”, and the loss of back-ups was something that happened “when lay people are working with electronic material”.

At one point Vardy approached a court reporter for the Sun and took him to task for a story by a different journalist that appeared in the tabloid on Thursday morning. The article claimed that the entire Vardy family would be moving to the US to escape the negative coverage caused by the case.

According to the BBC, Vardy told the reporter angrily that the relocation story was false and had upset her children. “That was cruel, my eldest is in bits,” she said.

Rooney and her husband, Wayne, were absent for the first time during the trial after leaving for a family holiday, which had been booked with the expectation that the trial would have finished by Wednesday.

Tomlinson told the court that the case against his client was based on dredging up other incidents – such as selling a kiss’n’tell story about Peter Andre – and saying “look at the terrible things she’s done – it’s likely she’s done this as well”.

He said he could understand why Rooney suspected Vardy was the leaker but there was no evidence that this was actually the case. “The obvious suspect is Caroline Watt. The case against Mrs Vardy only works if she knew about it and authorised it.”

Watt did not give evidence, citing health reasons. Vardy previously told the court that her former agent had been driven to suicidal thoughts by the libel trial, which was brought by Vardy to clear her name.

Earlier the court heard closing remarks from Rooney’s barrister, David Sherborne, who alleged that Vardy and her agent engaged in a deliberate conspiracy to destroy evidence.

He focused on the loss of Watt’s phone in the North Sea just days after Rooney’s lawyers had asked to search the device. Watt has maintained it was an unfortunate accident that occurred after the boat hit a wave while she was filming the Scottish coastline. Sherborne told the court that the incident was “fishy” and “far from an accident”.

He said Vardy had failed to call key witnesses, including her agent. “We have Hamlet, not just without the prince but also the entire royal court.”

He insisted Vardy had a long history of giving stories to the Sun, “about her boob jobs and resting bitch face,” arguing she often sought media attention and passed information to the newspaper.

Owing to the absence of direct evidence, Rooney’s legal defence has relied on a 300-year-old court ruling, Armory v Delamirie, involving a young chimney sweep who found a piece of jewellery while cleaning a fireplace. When the sweep had it valued, a jeweller surreptitiously removed the gems, leaving behind a number of empty sockets.

The 1722 legal ruling set a precedent that if the court can tell that evidence is missing, then the assumption should be that what is missing is of the highest possible value that would fit. Rooney’s lawyers argue this approach applies just as much in a case of missing WhatsApp messages sent by a footballer’s wife as it does in a case involving a missing gem in a piece of 18th-century jewellery.

Sherborne told the court that messages recovered from Vardy’s phone – in which Rooney was allegedly called a “cunt” and a “bitch” – were truly damning and embarrassing. Vardy has denied that the terms referred to Rooney.

The barrister invoked the 300-year-old precedent and argued that “one can only imagine how badly [Vardy’s] position would look were the court to have access to what she was able to successfully delete. What remains cannot be anything other than the tip of the iceberg.”

Mrs Justice Steyn will now consider the evidence before handing down a judgment later in the year.