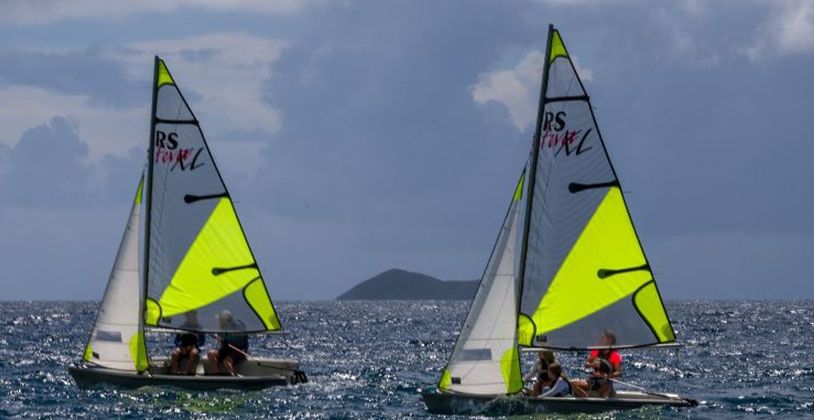 Despite the constantly changing conditions, racers enjoyed a six race series and close competition out in the Sir Francis Drake Channel.

The BVI Laser Masters Championship was born in 2018 and since then only one name appears on the trophy. Christian Thompson sealed the deal in 2018 and 2019 whilst COVID put a stop to the 2020 edition but could he do it again?

The Royal British Virgin Islands Yacht Club stated that Thompson set the marker down early to take the win in the first race ahead of 2021 BVI Dinghy Champs winner Colin Rathbun and Chris Haycraft. In race number two, Mike Hirst made his presence felt, taking the bullet with Thompson in second. In the remaining four races, Rathbun put the hammer down, took three out of four wins and with that, won the title by one point.

Haycraft sailed a consistent regatta despite waging a war against numerous tiller extensions and finished the day in third overall. New to BVI sailing and shaking off the cobwebs was Nick Maris who sailed a solid day, posting his best result of a third in the final race and finishing fourth overall.

In the Laser Radial Class, BVI Youth Team sailor Savion James took a string of bullets through the day, competing in his first regatta in the class. Marentia de Villiers, the only female Laser skipper, came in second behind James in the Radial, once again showing true grit and determination and always with a smile!

Meanwhile, in the Optimist class, Harry Dixon and William Sanders went head to head for the Back to School title. In the end it was Dixon who came out the victor with two firsts and a second. Congratulations to both sailors who put in a good performance on a tricky day and are eager to keep working hard at their trianing with the BVI Youth Sailing Team.

In the RSFeva class, Samuel Allen and Ethan George shared the helming duties throughout the day and took first overall. Mixiing it up with the Lasers they are put in a great performance, demonstrating the skills learned during the Feva Team Racing training with the BVI Youth Team. Cate Armstrong skipperd the second Feva, sailing with daughters Mia and Ellie in their first ever BVI regatta.