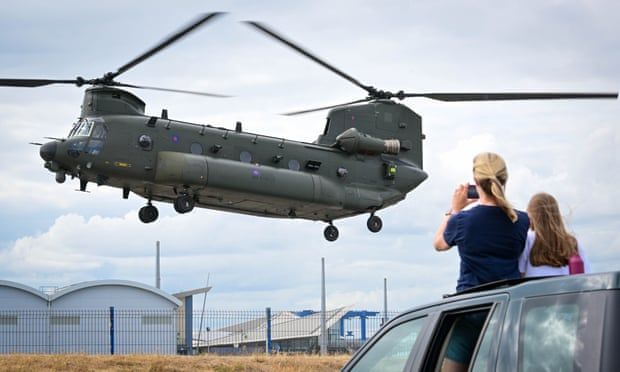 Maria Byford defends policy and MoD says ‘no standards will be lowered’ after concerns fighting strength could be undermined
The woman in charge of RAF recruitment has said she is “unashamed” of a policy that critics claim could mean women and people from ethnic minorities being prioritised over white men.

Air Vice-Marshall Maria Byford said she had “slowed” down the recruitment process for all candidates after figures showed the RAF was not hitting diversity targets.

Her comments followed the resignation of an unnamed female group captain, who ran the recruitment department at RAF Cranwell, apparently over concerns the fighting strength of the RAF could be undermined by “impossible” targets, Sky News reported.

An MoD spokesperson said: “No standards will be lowered for any group to get into the RAF. Basic training courses will be full when they commence. There is no threat to the RAF’s operational effectiveness.”

Byford, chief of staff personnel and one of the most senior females officers in the air force, told The Times she had slowed down the recruitment process ahead of a meeting of the RAF board next month.

The board meeting would look at ways to use “positive action” legally so recruits could potentially be selected on merit, their gender or ethnicity if they passed the basic requirements to join the service, she said.

“I want the best people. So I need the best people to join to achieve the best they can during their service career and we get … what we need from an operational capability perspective. And if I can include more women and more people from different backgrounds in that I think I have a better service in the long run. We are unashamed about doing that because I think that’s a good thing,” she told The Times.

She said the RAF had been “just shy” of meeting its diversity targets for recruitment this year of 25% women and 12% people from ethnic minorities, falling short by 5 percentage points and 4-5 percentage points respectively. So, she said, she had asked her recruitment team based at RAF Cranwell in Lincolnshire to stop filling up the training courses until early September.

The board would “not necessarily” prioritise women and minority-ethnic recruits over white men, she said, responding to critics who have accused the RAF of “wokery” and policies that are “little short of an illegal campaign of institutional sexism and racism against white male officers”.

She also disputed allegations that the RAF’s operational requirements could be affected by the diversity drive. The RAF aims to increase the proportion of female recruits to 40% by 2040 and that of people from ethnic minorities to 20%, which are more ambitious goals than the army or Royal Navy.

The military overall is raising its targets for recruiting more people from ethnically diverse backgrounds, according to an official MoD race action plan seen by the Telegraph.

The document reportedly calls for “more ambitious targets … to tackle under-representation” by March. But it is said to have provoked a row within the government. One military source reportedly accused the Ministry of Defence of pursuing a diversity “obsession” at a time when Britain faced its gravest threat since the second world war, the Telegraph said.

An MoD spokesperson said: “We maintain a laser focus in our response to Russia’s illegal invasion of Ukraine and our operations are always top priority. We also work to broaden the diversity of our armed forces to reflect the society they serve and to create an inclusive work environment that retains top talent.”
Add Comment