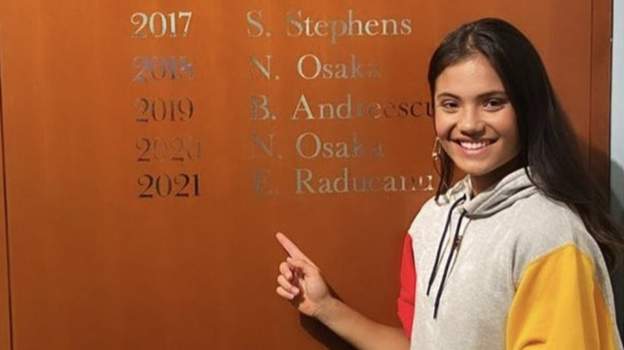 This sporting year seemed destined to be special - and Emma Raducanu's fairy tale in New York writes an unforgettable new chapter in the story of 2021.

The British 18-year-old, who came through qualifying for the right to take part in the tournament, did not drop a set in winning the US Open women's singles title.

Bookmakers responded by making Raducanu favourite to become the first woman since equestrianism's Zara Phillips 15 years ago to be the BBC Sports Personality of the Year.

It was talked about so much that "BBC Sports Personality" became a trending term on social media.

The award is decided by a public vote in December after an expert panel has announced a shortlist, but here are some of the leading names in the frame.

Emma Raducanu - Ranked 361 in the world in June, she passed her A-levels in August and became a major tennis champion the following month.

Tom Daley - Ended his long wait for an Olympic diving gold medal with an emotional victory alongside Matty Lee in the synchronised 10m platform event in Tokyo.

Jason Kenny - Equalled Sir Bradley Wiggins' tally of eight medals when he won silver in the Olympic team sprint. Kenny, 33, has one more gold and silver than his fellow cyclist.

Adam Peaty - Swimmer retained his Olympic men's 100m breaststroke title as he picked up two golds and a silver at Tokyo 2020.

Lewis Hamilton - Closing in on a 100th Formula 1 grand prix victory and this season is looking for an all-time record eighth world title.

Mark Cavendish - Made history in the Tour de France as he equalled Belgian great Eddy Merckx's record of 34 stage wins.

Joe Root - England cricket captain returned to the top of the ICC's Test batting rankings after scoring consecutive Test centuries in three matches against India at an average of 126.75.

Raheem Sterling - Scored three times as England reached the Euro 2020 final and was named in Uefa's team of the tournament alongside team-mates Harry Maguire and Kyle Walker.

Max Whitlock - The Team GB gymnast successfully defended his Olympic pommel horse title, performing the first routine in the final and setting a mark his rivals could not match at Tokyo 2020.

Raducanu's victory over Leylah Fernandez was the first time since a young Serena Williams beat Martina Hingis in 1999 that two teenagers had contested the women's US Open final.

The talented young pair are another success story in a notable 2021 for women in sport.

History was made in April when jockey Rachael Blackmore became the first woman to ride the winner of the Grand National at Aintree.

There were notable achievements at this summer's Olympic Games too with golds for middleweight boxer Lauren Price, Kenny and BMX pair Charlotte Worthington and Bethany Shriever among them. Shriever went on to land the world championship title too.

And 13-year-old Sky Brown became the youngest Olympic medallist for Great Britain when she won skateboard bronze in August.

At the Paralympics, the 43-year-old Storey won her 17th gold medal to become Great Britain's most successful Paralympian.

Earlier this month too, Europe's women completed a thrilling defence of golf's Solheim Cup in a dramatic and memorable encounter with the United States.