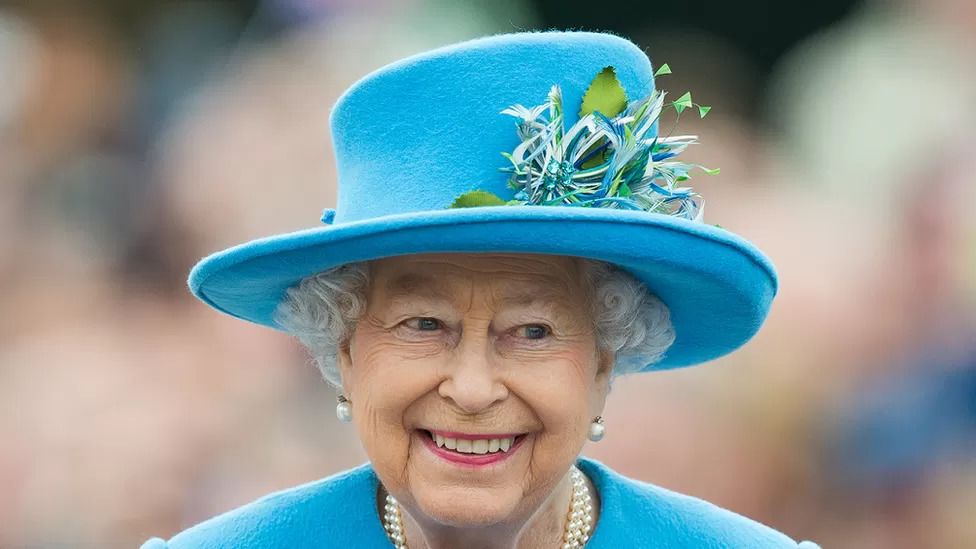 The certificate records the Queen died at 15:10 on 8 September in Balmoral Castle, at the age of 96.

Princess Anne is recorded as the person providing the information about the Queen's death.

For "occupation" of the deceased, the official form says: "Her Majesty the Queen."

The doctor who certified the death at Balmoral in Aberdeenshire was Douglas Glass, who Buckingham Palace says was an "apothecary to the Queen".

When she was alive there was a curtain of privacy around the Queen's health, and in her death there remains some restraint.

Her cause of death is recorded as "old age", without any further details. 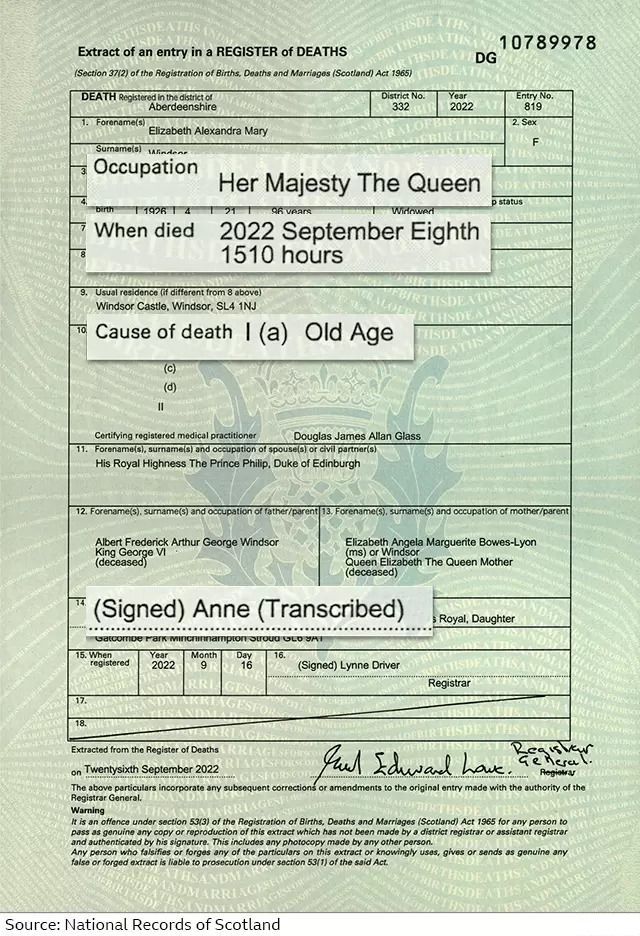 "Old age" is only usually given as the sole cause of death in very limited circumstances.

This would be where the certifying doctor has personally cared for someone over a long period; where a gradual decline has been observed and where a doctor is not aware of any identifiable disease or injury contributing to a death.

But the timing of the Queen's death does confirm more about what happened during the day of 8 September, when so much attention was being paid to reports of her ill health.

Buckingham Palace had formally announced the Queen's death at 18:30, with news organisations around the world immediately relaying the announcement that: "The Queen died peacefully at Balmoral this afternoon."

There were subsequent reports that the Prime Minister Liz Truss had been privately notified earlier at 16:30.

This death certificate shows the Queen had died at 15:10, more than three hours before the news was publicly released.

During that afternoon, following earlier reports of concern about the Queen's health, her children and grandchildren had rushed to Balmoral.

Buckingham Palace had confirmed in a statement of 12:32 that there were health concerns - but that the Queen was "comfortable" and "under medical supervision".

King Charles - then Prince Charles - and his sister Princess Anne had already been in Scotland.

But other members of the Royal Family travelled by air that afternoon, including Prince William.

The timings would now suggest that their flight was still on its way to Aberdeen airport at the time of the Queen's death.

After the drive from the airport, Prince William, Prince Andrew and Prince Edward and his wife Sophie arrived at Balmoral at about 17:00.

The stark details of the death certificate record the Queen's status as "widowed" and give some family details.

It requires the names and occupations of parents - her father formally recorded as Albert Frederick Arthur George Windsor, whose occupation was King George VI, her mother as Elizabeth Angela Marguerite Bowes-Lyon, who was Queen Elizabeth the Queen Mother.

The death had been recorded by the local registrar in Aberdeenshire on 16 September, when the Queen was lying in state in Westminster Hall in London.

The Queen's death certificate was released on the same day that the public was able to see her final resting place for the first time.