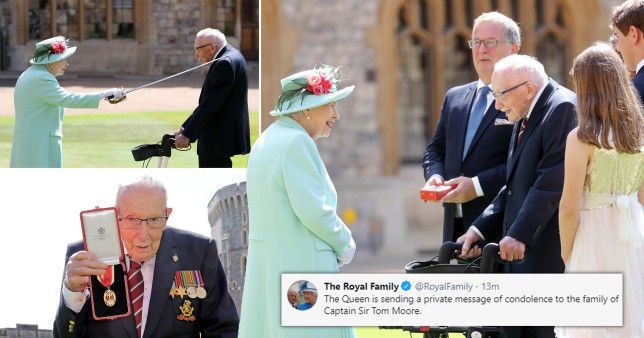 The Queen will send a private message of condolence to the family of Captain Sir Tom Moore, Buckingham Palace has announced.

Elizabeth II knighted the WW2 veteran last year in recognition of his efforts to raise money for the NHS during the pandemic.

A Buckingham Palace spokeswoman said the thoughts of the Queen and the royal family were with the military veteran and his family after his death was announced earlier.

The spokeswoman said: ‘The Queen is sending a private message of condolence to the family of Captain Sir Tom Moore.

‘Her Majesty very much enjoyed meeting Captain Sir Tom and his family at Windsor last year. Her thoughts and those of the Royal Family are with them.’

The Queen took the unusual step of honouring Sir Tom in the midst of the pandemic when she knighted him during an investiture, just for the veteran, in recognition of his efforts raising more than £32 million for the NHS.

Sir Tom was joined at the Windsor Castle ceremony by his family and on the day said he was ‘absolutely overawed’ to be knighted.

Downing Street has announced that the Union flag above Number 10 has been lowered to half mast in tribute and Boris Johnson has spoken to Sir Tom’s daughter Hannah Ingram-Moore to offer his condolences.


In a statement, the Prime Minister said: ‘Captain Sir Tom Moore was a hero in the truest sense of the word. In the dark days of the Second World War he fought for freedom and in the face of this country’s deepest post war crisis he united us all, he cheered us all up, and he embodied the triumph of the human spirit.

‘It is quite astonishing that at the age of 100 he raised more than £32 million for the NHS, and so gave countless others their own chance to thank the extraordinary men and women who have protected us through the pandemic.

‘He became not just a national inspiration but a beacon of hope for the world. Our thoughts are with his daughter Hannah and all his family.’

MPs described Sir Tom as a ‘real candle in the gloom’ for Britons, as they momentarily stopped debating legislation to recognise his passing. 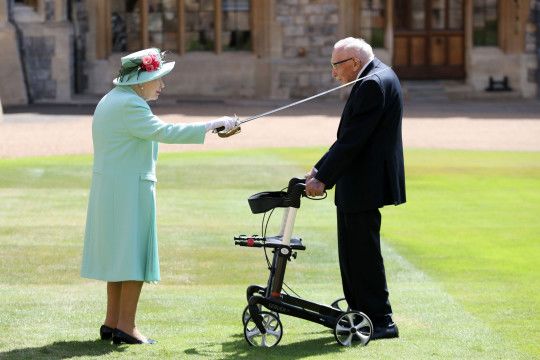 Queen Elizabeth II uses the sword that belonged to her father, George VI as she confers the Honour of Knighthood on 100-year-old veteran Captain Tom Moore at Windsor Castle

Deputy Speaker Nigel Evans told the Commons: ‘On behalf of the House of Commons can I pass our deepest condolences to his family.

‘He brought joy to the nation, he was an inspiration to everybody in this country and his achievement was properly recognised by a knighthood, which was movingly presented by Her Majesty the Queen in person at a special ceremony. I know the entire nation will mourn his passing.’

For Labour, shadow transport minister Mike Kane added: ‘Some people are born great, some people achieve greatness and some have greatness thrust upon them, and I think Sir Tom probably was all three of those things.

‘An inspiration to the whole nation at a time of crisis, a real candle in the gloom for the British people and I wholeheartedly concur with your comments, Mr Deputy Speaker.’