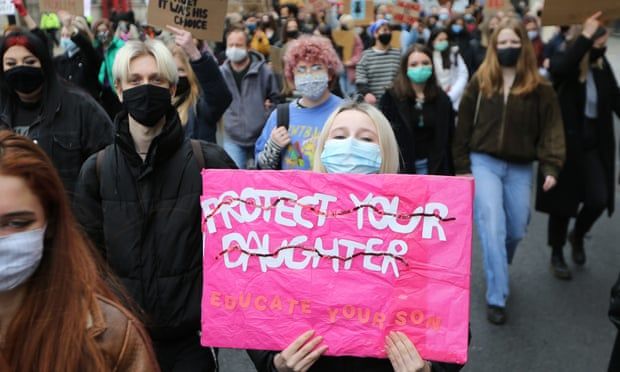 The use of non-disclosure agreements (NDAs) in cases of sexual harassment and abuse in higher education settings could be also be banned after a review.

It had been briefed that home secretary Priti Patel would not look to introduce a new street harassment law – called for by campaigners and the government’s own adviser.

But before the publication of its VAWG strategy on Wednesday, the government said it was “looking carefully at where there may be gaps in existing law”.

Patel said she was “determined to give the police the powers they need to crack down on perpetrators and carry out their duties to protect the public whilst providing victims with the care and support they deserve”.

The VAWG strategy will also see the launch of a new “StreetSafe” app allowing women and girls to record where they feel unsafe, as well as a public health campaign which will focus on perpetrator behaviour.

A £5m “safety of women at night” fund will concentrate on “innovative” projects, such as the widely criticised pilot to put undercover policemen in bars and nightclubs to keep women safe.

More than 180,000 people responded to a consultation on the new violence against women strategy, the majority of them following the murder of Sarah Everard, who was killed while walking home from a friend’s house in Clapham, south London in March.

A new national police chief with overall responsibility for tackling violence against women and girls will also be introduced, while the Ministry of Justice will commission a 24/7 rape and sexual assault helpline.

The strategy also promises a review into offender management to enable police to target repeat offenders, while the government also confirmed it would make virginity testing – the examination of the hymen – illegal.

Jess Phillips,the shadow minister for domestic violence, said there was much to welcome in the strategy, but added: “It has absolutely nothing in it about the sexual exploitation of adult women or any real sense about how it is going to ensure crimes like indecent exposure will be taken more seriously. Saying it on a document doesn’t make it so.”

Andrea Simon, director of the End Violence Against Women Coalition said the review into NDAs in higher education should be extended across all work places. “While the language is bold the funding detailed so far will not ensure the government can produce its promise: a radical change in the whole system,” she said.

Nimco Ali, independent adviser to the strategy said ending violence against women and girls would take “whole system” change. “The strategy aims to do just that, taking action through legislation and education, and I hope will be the foundation on which we can build a safer world for women and girls.”
#Priti Patel
Add Comment