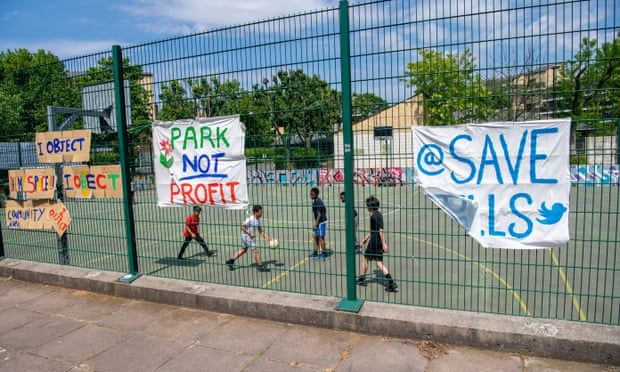 Protests are growing across London against plans to build thousands of new council homes on green spaces and existing estates.

Local authorities need to build desperately needed homes for social rent but they are facing resistance on the streets and in the courts, as council residents fight the destruction of communal gardens in dense and polluted areas.

As they did so, campaigners called out “shame on you”. The trees are being removed to make way for the major Flaxyard development, which will bring 120 new homes, 96 of them for council rent.

The area is officially a brownfield site, one of the council’s arguments for building homes on it. But walking through it looks and feels very much like a small park. The new homes that will replace it sit minutes from one of the borough’s most polluted roads.

Southwark council says it needs to build homes for thousands of families stuck in overcrowded accommodation or bed and breakfasts.

In June Southwark said it would look again at plans to build on a large play area in Bermondsey – but it is facing further opposition on multiple estates.

The Bells Garden estate in Peckham sits in a densely packed corner of south London, ringed by busy roads. The estate has large communal green spaces scattered with mature trees and play areas.

It is at the centre of a standoff over plans to build 97 new homes – 65 for council rent – taking part of the communal green and play spaces.

“These flats were built on top of terrace houses,” said Paul Wright, chair of the tenants and residents association. “And the green spaces were to compensate for the lack of gardens.”

“We have worked it out that given the increase in the number of people living here there is a loss of 40% of green space per head. And they want to swap a football cage used by many children and teenagers for a smaller one aimed at young kids.”

He added that local people felt they were not being listened to.

Local campaigner Janine Below blinks back tears as she walks through the estate. She believes that increasing the density by so many flats can only make the estate worse.

“We pick pears here, this estate has beautiful mature trees, but 37 of them are due to go. This is a working-class community and we need these spaces for our mental and physical health.”

The council says the site will be well provided for, with new play spaces and a “linear walkway” – as well as providing urgently needed homes. It has made a much-publicised promise to build 11,000 new homes for social rent by 2043.

Stephanie Cryan, cabinet member for council homes and homelessness, said: “Southwark is in the grip of a housing crisis with over 15,000 households on the waiting list for a home. We carefully assess the local area when planning new developments, including proximity to the borough’s extensive network of over 215 parks and green spaces.”

However, Tanya Murat, a coordinator for Southwark Defend Council Housing and founder of a new group opposing building homes on green spaces - Yes to Fair Redevelopment, is unconvinced and is angry that she is being accused of standing in the way of new homes.

“I have lived and worked in this area since the 90s and have been part of campaigns over the years to get developers to put more social homes in privately built estates,” she said. “So for the council to then turn round and say we don’t care about the homeless is disgraceful. We are in a climate and a mental health emergency, we need more green spaces not less.”

In Kilburn, north London, 700 people have signed a petition against the scale of development planned for Kilburn Square, where Brent council is consulting on plans for an extra 180 council homes. The plans will involve the removal of mature trees, a playground, a football pitch and open green space.

“They are looking at increasing the number of people living here by over 80% – without expanding the current site, losing green spaces and mature trees,” he said.

He stresses that campaigners do not oppose new council homes, just the burden being placed on existing tenants. “The council own this land so it is easier for them to build here than if they have to negotiate with private developers. But the wellbeing of the residents here matters. We have been collecting memories and stories from residents and people are really worried about losing their community space, where they played as children and they can watch their children play now.”

The campaign site warns that “development is raising the temperature in cities with the running of buildings adding to heat produced and increasing climate change.”

Brent council has said it is still consulting on the site.

Residents are taking their fight to the courts, with more than one council facing legal action. In January a high court judge permitted the eviction of climate protesters on a site in Islington, north London, where they were trying to stop the destruction of several mature trees. The site, Dixon Clark Court, will be home to a block of private homes which the council says will help fund 25 new social homes nearby.

On the Mais House in Sydenham, one of the highest points in London, Helen Kinsey and her neighbours are in a battle with Lewisham council over plans to build 110 new social homes on the estate, taking part of the communal green and removing 19 mature trees.

“We live in flats so we don’t have gardens,” said Kinsey. “This green space fosters community. Children get to play among the mature trees and we have birthday parties here and Easter egg hunts.”

Kinsey and her neighbours secured an unusual victory in May against Lewisham at the high court, where a judge overturned planning permission for the new homes, ruling that the council had hidden key information about conservation from its own planning officers.

However, within weeks of that verdict the planning committee passed it again, something Kinsey finds incomprehensible. “We are devastated. We are social tenants here as well as private renters and owners. So we know there is an urgent need for council housing, but we don’t agree with the scale they are proposing here.”

Like other local authorities, Lewisham council says it is pressing ahead with what are desperately needed homes for local families. Paul Bell, cabinet member for housing and planning, said the site would not take up the whole communal green area and that some flats would have new private gardens.