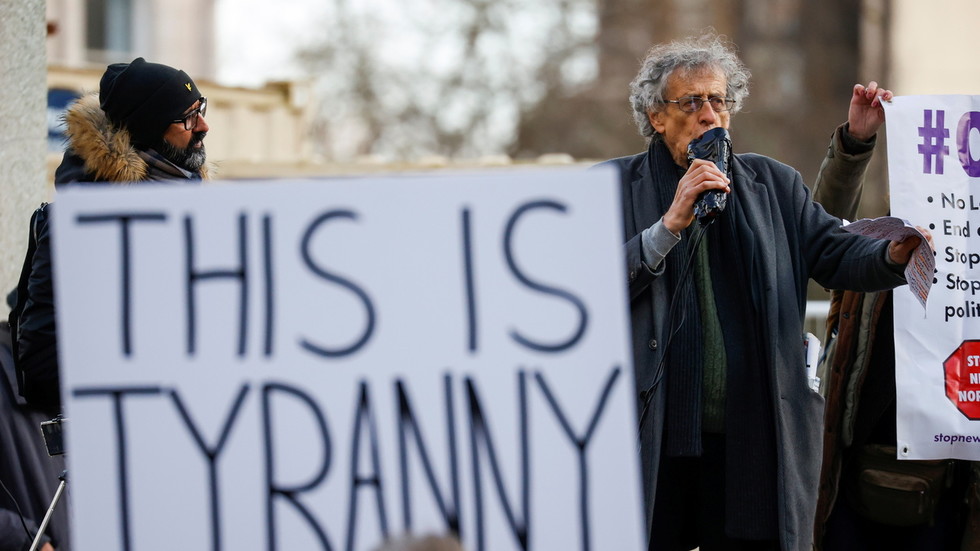 Anti-vaccine campaigner Piers Corbyn has been caught on camera by a pair of pranksters, accepting what he apparently understood was a bribe from AstraZeneca to shift his criticism from their vaccine to Pfizer and Moderna’s shots.

Piers Corbyn has become a regular fixture at anti-lockdown rallies in London over the last year, getting himself arrested on multiple occasions for breaching mask mandates and other Covid-related restrictions. He’s compared mass innoculation to the Holocaust, and picketed vaccination centres.

However, he’s apparently not above taking some cold, hard cash from the companies behind the jabs. YouTube pranksters Josh Pieters and Archie Manners recently posed as shareholders in AstraZeneca and scheduled a meeting with Corbyn at London’s trendy Sloane Square. There they feigned interest in Corbyn’s views and offered him financial support – as long as he criticized vaccines from Pfizer and Moderna instead of AstraZeneca.

In order to film the prank legally, the pair actually invested in AstraZeneca, purchasing a solitary share in the vaccine firm.

Corbyn called the cash offer “brilliant” and accepted it, but stated that he would only do so “as long as I can accept it with no insistence on any policy changes or anything that I’m doing.”

Manners told Corbyn that they were “not asking for a change in policy or anything but if there is anything that could be done to focus a bit on Pfizer or Moderna... that would be a useful thing.”

Corbyn seemingly agreed, saying that he was planning on focusing on the other vaccines anyway, and wrote down some perceived benefits of AstraZeneca’s vaccine relative to Pfizer and Moderna’s, and took the money, but only after Pieters and Manners staged a distraction and swapped the envelope containing £10,000 for another containing Monopoly money.

“If people ask where has this come from I’ll say... it’s a businessman who runs restaurants,” Corbyn suggested.

Piers Corbyn himself explained his side of the story on Saturday, stating that he “burst out laughing” once he realized he was the victim of a “skillful” prank. He admitted that he “perhaps naively” took the cash, but claimed that the pranksters would “take clips of conversation to make it look like something.”

However, his explanation was drowned out amid ridicule online.

It remains unclear whether the prank would turn off Corbyn’s supporters, some of whom have continued to defend the activist and question the motivation of the pranksters in online threads.